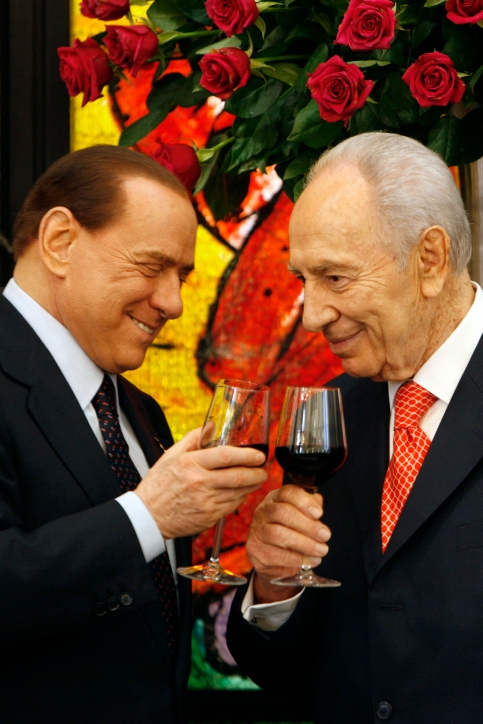 ROME (JTA) — Dogged by sex and corruption scandals, a revolt by former political allies, and WikiLeaks’ revelations that U.S. diplomats consider him “feckless” and a mouthpiece for Russian leader Vladimir Putin, Italian Prime Minister Silvio Berlusconi is fighting for his political life.

A parliamentary confidence vote Dec. 14 may bring down the three-time prime minister’s fractious center-right coalition and oust one of Israel’s closest friends in Europe.

A collapse of the government next week should not have any immediate impact on relations between Italy and Israel, however. The two countries cooperate closely in a variety of fields, and Italy is among Israel’s top economic partners in Europe. Any significant change in foreign policy would depend on whether early elections are called for the spring, and if so, what the outcome would be.

Berlusconi, 74, has a checkered record when it comes to Jewish issues. On the one hand, he’s been a strong supporter of Israel. Berlusconi has gone so far as to state that he “feels Israeli” and has called for Israel’s inclusion in the European Union.

“Israel’s security within its borders, as well as its right to exist as a Jewish state, is the ethical choice for Italians and a moral obligation against anti-Semitism and Holocaust denial,” he said in a message to a pro-Israel rally in Rome in October.

At the same time, however, the prime minister is known for tasteless Holocaust-related gaffes. He was filmed this fall telling a joke about a Jew charging another Jew about $4,000 a day for hiding him during World War II. The punchline: “The Jew says, ‘The question now is whether we should tell him Hitler is dead and the war is over.’ “

In 2003, he angered local Jews with remarks that appeared to minimize the brutality of Italy’s wartime fascist dictator, Benito Mussolini. But just days later, the Anti-Defamation League went ahead with a planned event honoring Berlusconi with its Distinguished Statesman Award.

“A friend is a friend even though he is flawed,” ADL National Director Abraham Foxman told JTA at the time.

A billionaire media mogul who has dominated Italian politics since the mid-1990s, Berlusconi won a landslide victory in 2008 at the head of a center-right coalition that includes his center-right People of Freedom Party as well as the notoriously anti-immigrant Northern League.

With Berlusconi’s approval ratings now at an all-time low, he is battling opposition from the left and the right. His biggest immediate challenge comes from former ally Gianfranco Fini, 58, the speaker of the lower house of parliament, who is fighting Berlusconi in a bitter contest for leadership of the right wing.

Fini, also a staunch supporter of Israel, split with Berlusconi this summer, accusing him of corruption and anti-democratic party policies. Last month, Fini launched his own political party, Future and Freedom.

Fini, too, has a checkered past on Jewish issues. He is a former leader of the neo-fascist movement. But he broke with the far right a decade-and-a-half ago and since then has cultivated relations with Jews, visited Holocaust sites, publicly condemned fascism and even donned a kipah during his first trip to Israel in 2003.

“It is undeniable that Fini made big and probably sincere changes,” said Annie Sacerdoti, the former editor of the Milan Jewish monthly Il Bollettino. But for some Jews, she said, “his past weighs on him.”

Italy is a highly polarized country, and to a large degree attitudes toward Berlusconi among Italy’s 30,000 Jews are emblematic of general right-left political divisions.

Postwar Italian Jews tended to support the left. But in recent years the strong pro-Palestinian — and in some cases virulently anti-Israel — bent of much of the left has alienated growing numbers of Jews. This has translated into more support for Berlusconi and his right-wing allies at the ballot box.

“For some in the Jewish world, Berlusconi’s unconditional support of Israel represents a guarantee that others do not give,” Sacerdoti said. “He says he is a friend of Israel — no ifs, ands or buts — and this makes him credible to a part of the Jewish world.”

Yet many Italian Jews firmly oppose Berlusconi’s overall politics. Some prominent Jews, including the left-wing member of parliament Emanuele Fiano, are active in an association called The Left for Israel, a group of politicians and others who support the Jewish state from a left-wing perspective.

Some critics describe Berlusconi’s vocal backing of Israel as a functional friendship aimed at winning Italian and international Jewish support.

Berlusconi and his allies “are full of declarations of love for Israel, but they are indifferent to local Jewish issues,” said Rabbi Ariel Haddad, director of the Jewish Museum in the northeast Italian city of Trieste. “I am happy that they support Israel, but they seem to see Israel as the only Jewish issue.”

Whatever the motivation, the support for Israel has trickled down to the local level, in some cases in surprisingly high-profile ways.

Rome’s right-wing mayor, Gianni Alemanno, was instrumental last year in having captured Israeli soldier Gilad Shalit declared an honorary citizen of the city, and a giant picture of Shalit hangs on the outside wall of Rome’s city hall, the Campidoglio.

With Berlusconi struggling to retain power in the face of Fini’s political revolt, public dissatisfaction and sex scandals — including allegations of “bunga bunga” sex parties and improper relations with teenage women, among them a Moroccan belly dancer known as Ruby Heart-Stealer — Italian Jews soon may have to reconsider their political loyalties.

“Whether Berlusconi or Fini prevails, one looming question will be whether a modern, non-fascist Italian right can survive and achieve success without the questionable support of the far-right, xenophobic Northern League,” said Francesco Spagnolo, an Italian Jewish scholar who works as a the curator of the Magnes Collection at a library at the University of California, Berkeley. “This will have repercussions.”