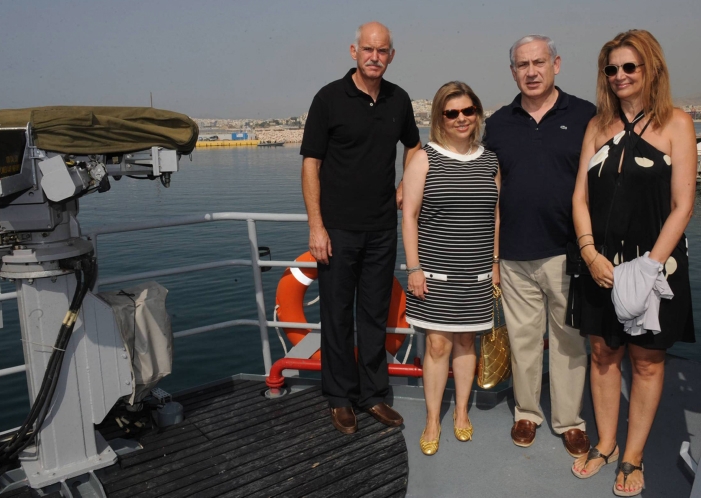 ATHENS, Greece (JTA) — Israel’s ambassador to Greece, Arye Mekel, was on the phone with a journalist earlier this month when the call came in that Israel’s Carmel region was up in flames. The Israeli prime minister needed to speak urgently with his Greek counterpart.

Mekel quickly located Greek Prime Minister George Papandreou in Poland, where he was meeting with the Polish president. But a Papandreou aide told Mekel the meeting could not be interrupted.

A few moments later Papandreou was on the phone. In just hours, five Greek firefighting planes were in the skies along with a cargo plane loaded with spare parts, mechanics and pilots. Benjamin Netanyahu greeted them at the airport.

The quick response by Greece was a sign of the increasingly close relations between two Mediterranean countries that until 18 years ago did not even have diplomatic ties.

Papandreou visited Israel in July, and the following month Netanyahu made the first-ever trip by an Israeli prime minister to Greece. In October, the two countries held joint military exercises. The Conference of Presidents of Major American Jewish Organizations recently announced that Greece would be the site of its annual leadership mission in February.

“Greece and Israel have opened a new chapter in their ties,” Mekel said. “Our two governments have taken a mutual decision to develop multifaceted cooperation in the fields of politics, security, the economy and culture.”

The subtext behind the sudden flurry of activity between Greece and Israel is the crisis in relations between Israel and Turkey, Greece’s chief rival. Those ties, already on the skids, took a nosedive after the flotilla incident of May 31, when nine Turkish nationals were killed in a clash with Israeli commandos aboard a ship trying to break Israel’s naval blockade of Gaza.

After the incident, Turkey canceled joint military exercises with the Israelis and withdrew its ambassador to Israel.

With Israeli Air Force pilots no longer able to train in Turkish airspace, and the Turkish market for Israeli military hardware and other exports at risk, Israel turned to Greece.

Conditions appear ripe for a boost to Greek-Israeli relations. For Israel, nearby Greece would seem to be a natural ally in a Mediterranean region dominated by Islamic countries.

For Greece, which is in the midst of a severe financial crisis, friendship with Israel is seen as a great asset, particularly due to Israel’s perceived closeness to the administration in Washington. By the same count, Papandreou hopes Greece’s closeness with Israel will convince Diaspora Jews to invest in Greece and support Greece in international disputes.

This wouldn’t be too different from the approach Israel and American Jewish organizations took vis-a-vis Turkey until recently — for example, opposing efforts to have the Turkish massacres of Armenians officially labeled as a genocide.

Greece also seeks an expanded role as a mediator in Middle East peacemaking — a role that until recently was occupied by Turkey.

By capitalizing on its close ties with the Arab world, Greece could be a source of trustworthiness, confidence and objectivity for both sides, he said.

For the time being, trade and tourism between Greece and Israel are growing. Approximately 250,000 Israeli tourists will have visited Greece in 2010, a 200 percent increase over last year, and bilateral trade stands at approximately $140 million, according to Mekel.

“Clearly there is a lot of room for improvement,” Mekel said. “Last week, a delegation from Israel came to Greece to present proposals to the Greek government for 13 large-scale joint projects in fields like tourism, agriculture, renewable energy sources, water and waste management, space technology and investments.”

The American Jewish organizational world already appears to be on board.

Aside from the Presidents Conference mission, Jewish organizations lined up behind a U.S. congressional resolution on Oct. 1 asking Turkey to respect the cultural heritage and the religious sites of the Greek Cypriots in Turkish-occupied northern Cyprus. Turkey invaded the Greek-speaking island in 1974 and retains control of its north. Israeli tourism to the Greek-speaking southern part of Cyprus, a Mediterranean island nation, is robust.

It’s all a major turnabout for two countries that until two decades ago didn’t really get along. In the 1980s, Greece was widely considered the most hostile country to Israel in Europe. Andreas Papandreou, the father of Greece’s current leader, was prime minister, and he pursued a policy of cozying up to Arab regimes. Greek officials recognized the PLO in 1981, and it wasn’t until Andreas Papandreou left office that Israel and Greece established formal diplomatic ties, in 1992.

Droutsas says Greece and Israel were never in conflict, but he acknowledges that government-to-government ties lagged far behind “true relations between the two peoples.” He said, “This gap must be closed and we are determined to strengthen and to deepen these relations at a fast pace.”

They’re catching up fast. Just three weeks after Papandreou visited Israel in July — the first visit since Greek’s then-premier, Constantine Mitsotakis, visited Israel in May 1992 when his country first recognized the Jewish state — Netanyahu spent a few days in Greece. The two prime ministers, both of whom speak flawless English from time spent living in the United States, appeared to be hitting it off as old friends, even cruising the Greek islands together.

Since then the official visits have been fast and furious. Droutsas, Greek Minister of State Haris Pamboukis and Culture Minister Pavlos Geroulanos all visited Israel. On the Israeli side, the director of political and military affairs at the Defense Ministry, Amos Gilad; Deputy Defense Minister Matan Vilnai, and minister without portfolio Benny Begin all have gone to Greece.

One area where Israel doesn’t have too many friends here is in the media. Influenced by 40 years of cultivation by pro-Arab and anti-Israel politicians, the Greek media have a mostly unfavorable view of Israel.

But that also has started to change. Mekel, a former journalist who appears frequently on Greek media, says there has been more positive coverage recently of Israel.

The improvement in Greece-Israel ties obviously has been welcomed by this country’s small Jewish community of about 5,000.

“There is no doubt that the improvement of the relations between the two countries makes us feel much more at ease,” said Beny Albala, head of the Athens Jewish community. “We hope that these relations will continue for a long time for the benefit of both countries and our community.”