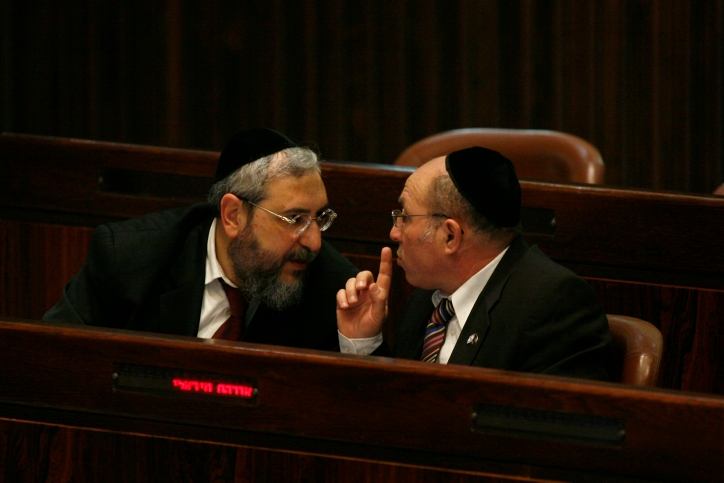 JERUSALEM (JTA) — Not so long ago, few Israelis had heard of Rabbi Chaim Amsellem, a soft-spoken Shas backbencher in the Knesset.

Over the past few weeks, however, Amsellem has emerged as a maverick in Israeli politics. Having broken ranks with the Orthodox-oriented Shas and its haredi leaders, he is talking about establishing a new party to challenge for the Sephardic vote.

It’s not so much the politics that makes Amsellem’s move significant; the chances are slim that other Shas Knesset members will break with the party to join Amsellem.

Rather, Amsellem’s very public rejection of Shas orthodoxy is part of an emerging movement in the Israeli Sephardic world against the rigid Orthodoxy that Shas leaders have tried to impose on followers.

Indeed, Amsellem speaks of nothing less than a Sephardic “social and cultural revolution,” which his new party would both tap into and promote.

At the heart of the movement is a novel reassessment of the idea of the “society of Torah scholars,” perhaps the most fundamental formative principle of the haredi world.

Both Shas and the Ashkenazi haredi parties hold that virtually all young haredi men should devote themselves solely to Torah study, as a society of Torah scholars who are exempted from mandatory army service as long as they stay in the yeshiva. This has led to deep poverty in the haredi community because rather than serve in the Israel Defense Forces, many haredi men choose to stay on indefinitely in the yeshivas.

Amsellem and others want to change this approach. Amsellem advocates a society of Torah scholars comprising only a small elite of specially gifted students, with all others serving in the army and joining the labor force. This, he argues, is the true, more lenient Sephardic approach: a productive, working life combined with Torah study whenever time allows. Amsellem says excessive Ashkenazi or “Lithuanian” influence led Sephardim to embrace the model of an all-inclusive society of Torah scholars.

Now, he says, it’s time to break free from such thinking, mainly because it perpetuates a state of poverty among the haredim.

“Our goal is that people who genuinely study should get a real cost-of-living stipend, not just pennies,” Amsellem told JTA in an interview. “This will be possible only when those who are genuinely part of the society of Torah scholars devote themselves to study, and those who aren’t combine Torah study and work, the way the Sephardim down the ages have always done.”

“Over the past few years we are witnessing a dramatic increase in the number of haredim enlisting in the army,” said Asher Cohen, a Bar-Ilan University political scientist who focuses on religious parties and movements. “We also see a growing trend of both men and women going to colleges of higher education. People are trying to break out of the vicious cycle of poverty, as happens in any normal society. They are studying and looking for work.”

Cohen believes the notion of the society of Torah scholars is already collapsing; it’s just that haredi leaders are not ready to admit it or condone it.

The numbers alone suggest that something serious is happening. A decade ago, hardly any haredim served in the IDF. When a special haredi infantry battalion was established in 1999, it had just 30 soldiers. Today it numbers more than 1,000, including three companies at various stages of training and two combat units. Another 1,000 haredim serve in special haredi technological units in the Air Force, Navy and intelligence corps.

In Israel, where the IDF is a vehicle for giving young Israelis marketable skills for later in life, these numbers are significant not just to the military but for Israeli society as a whole: These haredim are picking up skills for the job market.

An additional 1,000 haredim are enrolled in National Service, an alternative to military service that makes it possible for them to join the job market without being drafted into the IDF.

The number of haredim studying mainly vocational secular subjects in haredi colleges or secular colleges with special programs for haredim has more than quadrupled since 2005, to approximately 5,000. Most of the students are women — many of them, ironically, in institutions supported by Shas.

The government also is playing a key role. Education Minister Gideon Sa’ar has proposed a blueprint to increase the numbers by another 3,000 over the next five years. The Trade and Industry Ministry has launched special vocational courses for haredim and offers incentives to businesses that employ them.

These programs clearly are meeting a growing need. In a recent poll conducted by Chakima, an institute that helps haredim prepare for higher education, 53 percent of haredim said they would be interested in studying for a secular profession in a religious, gender-segregated classroom environment.

The new trend seems to be fueled by a confluence of interest between haredim desperate to break out of the cycle of poverty and a government eager to bring them into the labor force. Finance Minister Yuval Steinitz has even suggested waiving for haredim the national requirement to serve in the IDF, so they can go straight into the workforce.

Employment of haredi men will increase rapidly over the next decade, the Ministry of Trade and Industry forecasts. Some Israelis are talking about the emergence of a haredi middle class.

Others, however, see a much slower change. They note that some 50,000 haredi students still have IDF exemptions that are valid only as long as they stay in yeshiva and don’t work (until a certain age).

Holding back change are haredi leaders who believe that dramatic or rapid change may destroy the very fabric of haredi society.

“It’s only happening at a snail’s pace because there is no real leadership,” Amsellem said. “No one has stood up and openly said this is the way things ought to be except me.”

Amsellem wants to build a genuinely socially concerned party independent of rabbinic fiat. Unlike conventional haredi Orthodoxy, which turns its back on modernity and often on the secular Israeli state, Amsellem is willing to entertain a working symbiosis between haredi Orthodoxy and the modern world. He also is unabashedly ready to call himself a Zionist.

His positions have earned him rogue status in Shas. In late November, the Shas Council of Torah Sages expelled Amsellem from the party and demanded that he hand over the Knesset seat he had won on the Shas ticket. Amsellem refused, resulting in a campaign of discreditation. Placards in Jerusalem and Bnei Brak compared Amsellem to Amalek, the biblical Israelites’ worst enemy.

Among the haredi leadership, Amsellem is very much a lone figure. His ideas, however, enjoy wide public support. In an early December poll by the Panels Research Institute, 52 percent of Israelis polled said enlisting haredim in the army and having them join the workforce was the only way to save haredi society. An astonishingly high 22 percent of haredim concurred.

Despite evidence of some support among haredim for such change, the chances of Amsellem being politically successful are minimal as long as Rabbi Ovadia Yosef, the nonagenarian spiritual mentor of the Shas Party, is alive. His impolitic remarks about non-Jews notwithstanding, Yosef commands universal praise within Shas, and even from Amsellem.

“I don’t think anyone could defy Rabbi Ovadia and win votes,” Bar-Ilan University’s Cohen observed. “And I don’t see rabbis, even those who say privately that Amsellem is right, joining a political movement that challenges a rabbinical authority of Ovadia’s stature.”