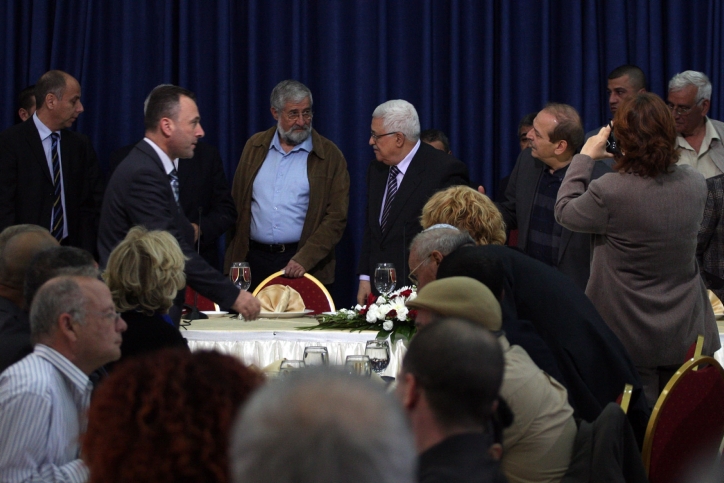 NEW YORK (JTA) — In the long-running Palestinian-Israeli conflict, score some recent victories for the Palestinians.

It’s not that Israel has given an inch in the territorial dispute over the West Bank, or that the Palestinians in Gaza have achieved new military victories against the Israelis, despite increased rocket and mortar fire from the coastal strip in recent weeks.

Rather, the Palestinians have scored a series of diplomatic and public-relations successes against a Jewish state weakened by fraying relationships and a declining  reputation internationally.

On the diplomatic front, Palestinian leaders announced this week that 10 European Union countries were upgrading their ties with the PLO. Earlier this month, three Latin American countries — Brazil, Argentina and Bolivia — issued formal recognitions of the state of Palestine.

On Sunday was the much-publicized lunch hosted by Palestinian Authority President Mahmoud Abbas for Israeli politicians and activists in Ramallah. Numerous Op-Eds followed in the Israeli media and overseas noting that there is a Palestinian partner for peace even if there isn’t an Israeli one.

Then there was the early December decision by the Obama administration to drop its effort to persuade Israel to agree to an additional 90-day freeze of Jewish settlement construction in the West Bank. Commentators cited Israeli intransigence as the primary reason.

“Israel,” columnist Thomas Friedman wrote in a Dec. 11 Op-Ed in The New York Times, “when America, a country that has lavished billions on you over the last 50 years and taken up your defense in countless international forums, asks you to halt settlements for three months to get peace talks going, there is only one right answer, and it is not ‘How much?’ It is: ‘Yes, whatever you want, because you’re our only true friend in the world.’”

Over the last few months, Israel’s declining international reputation has given the Palestinians and their allies an opening they have exploited by effectively casting Israel as the bully and the unyielding party in the Israeli-Palestinian dispute.

It is a message that is promoted relentlessly by the Boycott, Divestment and Sanctions movement, which seeks to make Israel an international pariah, and it is reinforced by negative assessments of Israeli actions such as the Israel-Hamas war in Gaza two years ago, the deadly Turkish flotilla incident of May 31 and Israel’s daily treatment of West Bank Palestinians.

If the goal is to increase pressure on Israel to accede to the creation of a Palestinian state, a strategy that focuses on diplomacy and PR appears to have a greater chance of success right now than the Palestinians’ decades-long strategy of terrorism and war.

That strategy — call it the violent one — was snuffed out in recent years by Israeli military operations, Israel’s erection of the West Bank security fence and a recognition by leading Palestinian figures that the violence was doing more harm to the Palestinian national cause than good.

“We tried the intifada, and it caused us a lot of damage,” Abbas told an interviewer with the London-based Arabic daily Al Hayat in September.

Abbas said the Palestinian Authority would not revert to violent uprising even if peace talks collapsed.

With relative moderates like Abbas in charge of the Palestinian Authority in the West Bank — the primary public face of the Palestinians — there is a greater understanding that to achieve statehood the Palestinians must win the world to their side. That, after all, paved the way for the creation of the State of Israel, after the United Nations voted in November 1947 to recognize a Jewish state in Palestine.

Now the Palestinians are setting their sights on this same goal.

U.N. recognition would shift the conflict from one over “occupied Palestinian territories” to a conflict over an “occupied state with defined borders,” Palestinian negotiator Saeb Erekat said. “We urge the international community to salvage the two-state solution by recognizing a Palestinian state on the 1967 borders.”

While U.N. recognition of Palestine might make a diplomatic end run around Israel, it hardly would result in an immediate Palestinian state. The United Nations would have no way of enforcing its decision, and Israeli troops and settlers would remain in the West Bank.

What it would do, however, is significantly ratchet up the pressure on Israel to deal with the Palestinians.

“Widespread international recognition of Palestine’s legitimacy and existence has very significant consequences,” Hussein Ibish, a senior fellow at the American Task Force on Palestine, wrote on his blog earlier this month.

That pressure isn’t just coming from outside Israel.

“The Palestinians will declare a state. Virtually the whole world will recognize it. And we will be left without security arrangements,” Israeli Trade and Industry Minister Benjamin Ben Eliezer warned in October.

There is pressure even from inside Prime Minister Benjamin Netanyahu’s own Likud Party. Likud veteran and Cabinet minister Michael Eitan has proposed moving settlers willing to accept compensation and relocation out of the West Bank and into Israel proper to signal to the world that Israel is serious about wanting peace with the Palestinians.

This week, Haaretz columnist Akiva Eldar wrote that Israel needs to be saved from itself.

“Almost no day goes by without some other country recognizing a Palestinian state within the 1967 borders,” Eldar wrote. “According to the WikiLeaks documents, even the Germans, Israel’s steadfast supporters in Europe, have lost their faith in the peaceful intentions of Benjamin Netanyahu’s government.”

Whatever criticism there is inside Israel about the Israeli government’s approach toward the Palestinians, the criticism outside Israel is sharper.

The main holdout is the United States, where recent polls show that the American people overwhelmingly favor Israel over the Palestinians, and Congress remains steadfastly pro-Israel.

The Boycott, Divestment and Sanctions movement is aiming to change that. Using everything from campus activism to boycotts of stores that sell Israeli food products to bus ads promoting pro-Palestinian messages, the movement is hoping to sway public opinion.

Starting Dec. 27, the two-year anniversary of the Gaza war between Israel and Hamas, a group called the Seattle Midwest Awareness Campaign will be running ads on the sides of Seattle buses featuring photos of children looking at a demolished building under the heading “Israeli War Crimes: Your tax dollars at work.”

At Princeton University in New Jersey, DePaul University in Chicago and on the streets of Philadelphia, pro-Palestinian activists have campaigned to have Israeli brands of hummus removed from campus cafeterias or store shelves. In New York, boycott supporters demonstrated outside a store belonging to the Israeli chocolatier Max Brenner.

“The relics of the past boycotts — from Nuremberg to Damascus — are back,” Ethan Felson, vice president of the Jewish Council for Public Affairs, wrote in a JTA Op-Ed. “Its proponents seek to bring the Israeli-Palestinian conflict into every sphere of American life.”

In the zero-sum game that is the Israeli-Palestinian conflict, that’s good news for the Palestinians.