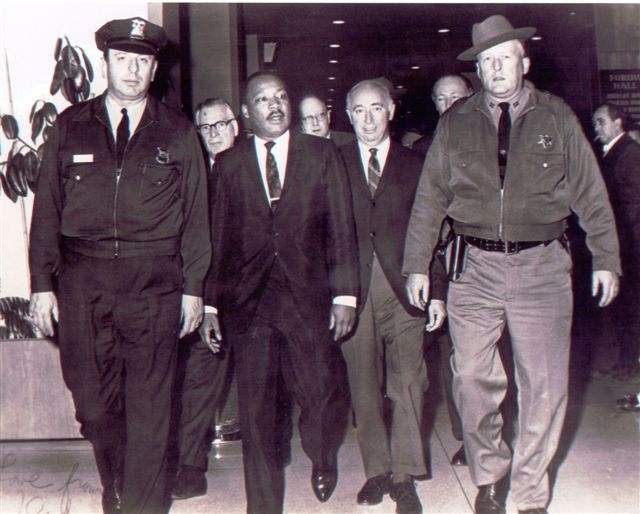 At least that was the case in the 1960s, he says, when Dresner was one of dozens of rabbis who answered the Rev. Martin Luther King Jr.’s call for clergy from the North to join the civil rights movement in the Jim Crow South.

From the Freedom Rides of 1961 to the famous march in Alabama from Selma to Montgomery in March 1965, when Rabbi Abraham Joshua Heschel walked in the front row with King, Jews were prominent participants in the battle for civil rights that dominated the first half of the ’60s.

Of the thousands of white activists who headed South, nearly half were Jewish, according to “Jewish Dimensions of Social Justice,” a 1998 publication of the Reform movement.

“This was living out what Judaism itself has been teaching all along, that you have to help the oppressed, the underprivileged, not stand idly by the blood of your neighbor,” said Rabbi David Teitelbaum, 84, of Redwood City, Calif.

As the United States gets set to mark Martin Luther King Day on Jan. 17, some rabbis who traveled South to join the man who would go on to win a Nobel Peace Prize talked to JTA about the civil rights struggle.

Teitelbaum went to Alabama with four other rabbis from northern California in March 1965 for the voter registration drive of African Americans and the Selma march.

The rabbis who joined these efforts were arrested, jailed and sometimes beaten, protected by the color of their skin from the worst physical dangers, but nonetheless threatened on a daily basis.

Dresner’s first arrest was in June 1961, when he and the late Rabbi Martin Freedman of Paterson, N.J., along with eight Protestant ministers, formed the first interfaith clergy Freedom Ride. Their bus was part of a summerlong campaign of white and black activists, many of them clergy, who traveled together throughout the South to draw attention to the evils of segregation.

The young Dresner went to jail each summer for the next three years as he brought ever larger groups of rabbis and ministers to join the struggle in the South.

“I was a Reform rabbi, but I always wore a yarmulke,” said Dresner, now rabbi emeritus of Congregation Beth Tikvah in Wayne, N.J. “I wanted people to know I was Jewish.”

The president of the NAACP at the time was Kivie Kaplan, a prominent member of the Reform movement’s social action commission. Kaplan bought the Washington building that became the headquarters for the movement’s new Religious Action Center and also housed the fledgling Leadership Council on Civil Rights.

Black and Jewish lawyers on a table in that office drafted what became the major civil rights laws of the mid-‘60s, recounted Al Vorspan, who directed the Reform commission for 50 years.

It was a time when Jews and blacks often found common cause in the struggle for justice in a country where both had been oppressed.

Rabbi Matthew Simon, 79, now the emeritus rabbi of B’nai Israel in Rockville, Md., was working at a Conservative congregation in Los Angeles when he joined the 1965 Selma march.

“I had very good relationships with the black clergy in the San Fernando Valley,” he recalled. “We worked together on social action issues, on voting rights and housing rights, not just in Los Angeles but all over the country.”

Jews who took part in these efforts took considerable push-back from fellow Jews who felt that Jewish activism was better directed at issues of Jewish, not general, concern.

Most of the rabbis who marched with King, or joined the Freedom Riders, were Reform, said Vorspan, now senior vice president emeritus of the Union for Reform Judaism, formerly known as the Union of American Hebrew Congregations.

UAHC came out “strongly and unequivocally” in favor of civil rights activism, he said, but the rabbis who went South risked more than physical danger.

“Many of their congregations were on the verge of firing them for it,” Vorspan said. “I personally went to several congregations threatening to fire their rabbis and told them it would be a ‘chilul Hashem,’ ” a desecration of God’s name.

Three of the largest Reform temples in the country, including Temple Emanuel in New York, temporarily withdrew from the Reform movement, he recalled, because of the movement’s support for the civil rights struggle and later opposition to the war in Vietnam.

Meanwhile, leading black activists were borrowing heavily from Jewish sources, particularly the Bible, in their sermons and speeches. King himself often used biblical motifs, especially the Exodus, to dramatize the African-American journey from slavery to freedom.

One night in Georgia in the summer of 1962, Dresner and King were trapped with other activists in a house surrounded by hundreds of members of the local White Citizens Council.

While they were waiting for help, King told Dresner about the Passover seder he’d attended that spring at a Reform synagogue in Atlanta. He particularly recalled reading the Haggadah and hearing the phrase “We were slaves in Egypt.”

“Dr. King said to me, ‘I was enormously impressed that 3,000 years later, these people remember their ancestors were slaves, and they’re not ashamed,” Dresner said. “He told me, ‘We Negroes have to learn that, not to be ashamed of our slave heritage.’”

Negro was the accepted term for African American in the 1960s, Dresner noted.

In March 1965, Rabbi Saul Berman, then the spiritual leader of Congregation Beth Israel in Berkeley, Calif., traveled to Alabama with the rabbinic delegation from northern California.

Black leaders in Selma called, asking the rabbis to bring a box of kipot, or yarmulkes, with them.

“At that time, black people in the South were wearing kipot as a freedom cap,” explained Berman, now a prominent Orthodox scholar who teaches at Stern College and Columbia University School of Law in New York. “It was an extraordinary indication of the extreme penetration of the Jewish community.”

At the same time, Berman said, a “disturbing undercurrent” began to surface in the movement. As his group of 150 activists was arrested for the second time on its way to Selma, debate broke out as to whether they should disband, with a promise not to return, as local police were urging.

“They didn’t want to book us — half the group was clergy,” Berman said.

As the white ministers pondered the best move, the black participants became angry.

“The question arose, whose movement is this?” Berman said. “It was a precursor of much more intense feelings of that sort that emerged in the late ‘60s as black leaders began to resent white leaders who felt the civil rights movement was ‘theirs.’ I didn’t recognize the significance of that scene until much later.”

Many of the rabbis who were active in the civil rights struggle went on to support freedom for Soviet Jewry, motivated by the same sense of prophetic justice that drew them to the South, and by the desire to protect their fellow Jews in trouble, a more particularist concern that grew as the decades passed.

Today, relations between the black and Jewish communities are rarely as strong as they were in the heyday of the civil rights struggle.

“The issues of concern today are those of American society as a whole, not of blacks being able to enter American society,” said Simon, who notes that even after 30 years in suburban Washington, he still does not know his local black clergy. “I interact with them from time to time, but they’ve never come to us for a common action.”

Rabbi David Saperstein, director of the Religious Action Center, is the only non-African American on the board of the NAACP. Many synagogues and Jewish community centers run Freedom Seders at Passover with local African-American and Latino leaders, or interfaith Shabbat services to honor Martin Luther King Day.

And rabbis who marched with King say they’d do it again.

“Because I’m Jewish,” Dresner said. “I didn’t see any alternative.”

(Amanda Pazornik of the j weekly contributed to this report from San Francisco.)