Collecting Lincoln: The making of a national treasure 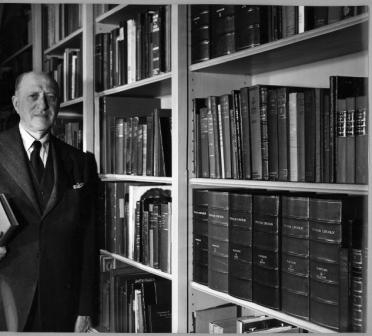 Honest, he loves Abe: Alfred Whital Stern standing with his Abraham Lincoln collection. (Courtesy of the Library of Congress)
Advertisement

LOS ANGELES (JTA) — On Presidents Day, while remembering Washington and Lincoln, perhaps take a minute as well for Stern.

Little known outside of bibliophiles and Civil War buffs, one of the greatest private collectors of works about Abraham Lincoln was a Jewish clothing manufacturer executive from Chicago named Alfred Whital Stern.

About three score and one year ago, in 1950, a world of time before shows such as “Antique Road Show” brought collecting to the public’s attention, and films such as “National Treasure,” put Americana in vogue, Stern donated his world-class collection of rare Lincoln books, papers and memorabilia to the Library of Congress.

“The treasures are quite spectacular,” said Clark Evans, head of reference services in the Rare Book Reading Room of the Library of Congress.

Comprised of more than 11,000 manuscripts, broadsides, portraits, political cartoons, newspapers, medals, artifacts, autographs and sheet music, and occupying its own room in the Washington library, the gift is known as the Alfred Whital Stern Collection of Lincolniana.

Additionally, Stern donated funds for an endowment, which ran out only recently, so that additional works could be acquired.

Among its highlights is a letter written by Lincoln to Gen. Joseph Hooker in 1863 offering him the command of the Army of the Potomac. According to Evans, the letter purchased by Stern in 1941 for $15,000 “is universally regarded to be among Lincoln’s greatest compositions.”

Also included are several rare objects: a bronze life mask of Lincoln made in 1865 and a casting of Lincoln’s hands, as well as Lincoln’s scrapbook of the Lincoln-Douglas debates in which Lincoln wrote comments.

At the time of the gift, the entire collection was valued at $1 million.

Stern, a native New Yorker of German-Jewish parents, lived most of his adult life in Chicago. He was married to Agnes Wolff Stern, and together they had three children, John, Nancy and Tom.

His collecting of Lincoln books and papers began seemingly by accident.

According to an article in the Quarterly Journal of the Library of Congress, Stern was on a family vacation in 1923 in Atlantic City, N.J., when he discovered that some of his 7-year-old son John’s school books had been left behind.

While looking for an “instructive book” to fill in, Stern happened upon “The Uncollected Letters of Abraham Lincoln,” edited by Gilbert Tracy.

“All I knew then about Lincoln was that he had been president of the United States,” Stern is quoted as saying. “I decided that any man who expressed so much in so little was worth knowing. So I began reading and buying books about Lincoln.”

Every serious collector needs someone with whom to share, and Lincoln scholar Harold Holzer says that someone for Stern was likely fellow Lincoln collector and good friend Henry Horner, the first Jewish governor of Illinois.

“They were pals,” Holzer told JTA.

Among the thousands of works in the collection, Evans was able to find several items of particular interest to the Jewish history buff, including a book by Emanuel Hertz titled “Abraham Lincoln: The Tribute of the Synagogue.” The book is a collection of sermons delivered from synagogue pulpits after Lincoln was assassinated.

Did Stern’s fascination with collecting works about the Great Emancipator connect to his Jewishness?

Certainly he wanted Israel to know about Lincoln.

In the 1940s Stern made his first major donation of more than 1,400 Lincoln books and documents to the Hebrew University in Jerusalem. When he died in 1960 in his late 70s, a special ceremony was held on campus honoring his contribution and life.

“My father felt the people [in Israel] should know about Lincoln, too,” said Nancy Warner, Stern’s daughter, who is now in her 90s and living in Buffalo, N.Y.

Due to the fact that “most of the non-Hebrew and Jewish books received by the library before 1985 were, until recently, not included in the computerized catalogue,” Coren wrote in an e-mail, the collection has “been consulted mainly by a few researchers of United States history who knew about the collection.”

“A project to computerize all the remaining card catalogue of the National Library is now under way,” she wrote.

Coren hopes the usage will increase when the project is completed by the end of 2011.

An obituary in the Chicago Daily News described Stern as a “shy and modest man who made a comfortable fortune in business and spent a great part of it collecting books and manuscripts on Abraham Lincoln for posterity.”

“He was not a religious man, but highly principled,” said Warner, who maintained a close relationship with her parents. She recalled that as a child they “always spoke German when they didn’t want us to understand.”

Rabbi Louis Mann of the Chicago Sinai Congregation wrote to Stern in 1950 thanking him for his donation to the Library of Congress.

“Chicago Sinai Congregation rejoices that one of its members has done such a noble thing,” Mann wrote in a letter dated Dec. 6 of that year.

As to who uses Stern’s legacy, Evans noted that scholars such as Holzer, Douglas Wilson, Michael Burlingame and David McCullough, as well as Pulitzer Prize winner Doris Kearns Goodwin, all have done Lincoln research using the Stern collection.

“The beauty of the collection is to have everything related to Lincoln at a scholar’s fingertips,” said Evans, who added that access to the collection  also is available to the public.

“Stern was a monumental figure, his name is writ large in my mind of the Lincoln collectors,” said Daniel Weinberg, proprietor of the Abraham Lincoln Book Shop in Chicago.

“I had a standing authority to get him whatever book he didn’t have,” Newman wrote of the man he described as methodical and looking like an English gentleman.

Since Stern’s death, the Stern family has kept contact with the Library of Congress. As recently as 2010, Warner traveled to Washington to visit the collection along with her granddaughter, Lindsey Warner.

“My father thought everybody should have a chance to look at his collection and learn about Lincoln,” said Nancy Warner.

(Edmon J. Rodman is a JTA columnist who writes on Jewish life from Los Angeles.)