Amid rancorous debate, a voice for American Jewry pushes civility 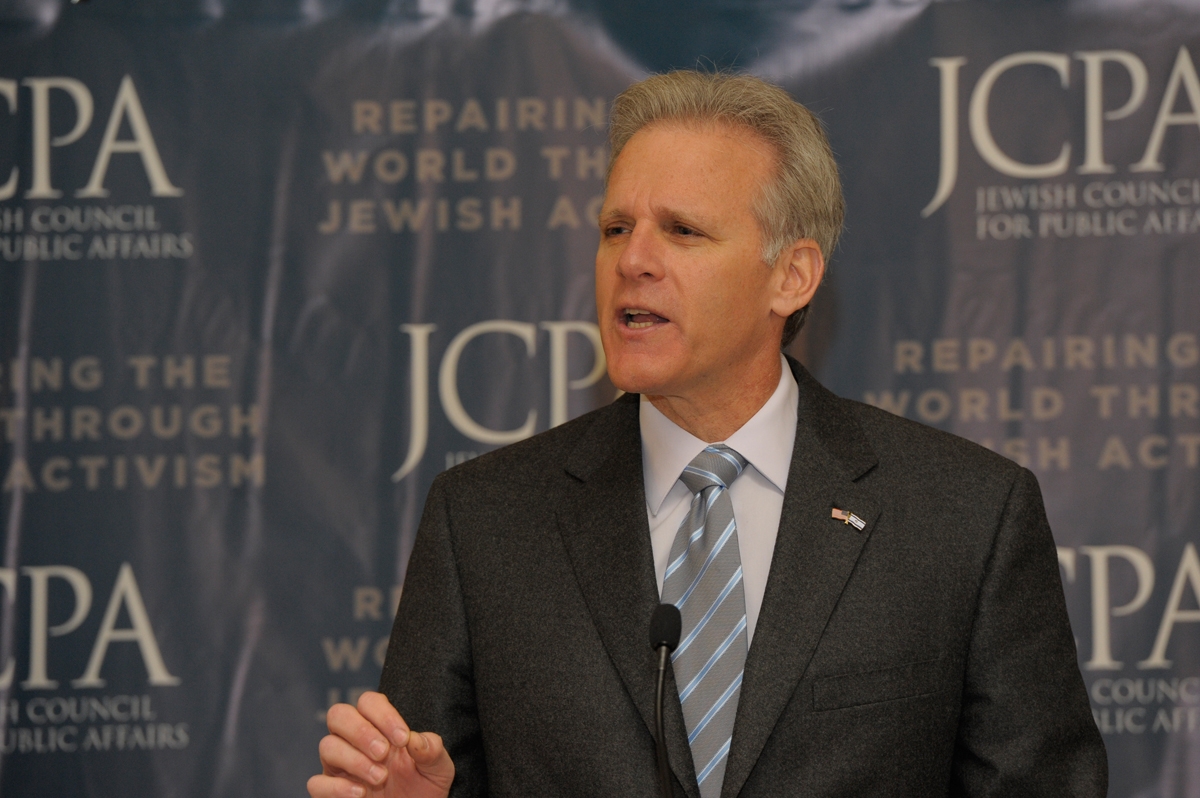 WASHINGTON (JTA) — When disagreement among American Jews on Israel-related issues runs deep, how does an organization that bills itself as the representative voice of the organized American Jewish community formulate policies and priorities?

By emphasizing civility in public discourse, for starters.

That was one of the main areas of focus at this week’s annual plenum of the Jewish Council for Public Affairs, which drew delegates from Jewish community relations councils and national advocacy groups across the United States to talk about American Jewish public policy priorities.

Plenum organizers said the goal was to show that while differences within the Jewish community factions are substantive, particularly when it comes to Israel, it’s possible to discuss them without rancor.

“Civility is not avoiding uncomfortable conversations — it’s our respect for the dignity of other people and careful listening,” said Ethan Felson, the JCPA’s vice president.

That approach led to sessions featuring polar opposites: Rabbi David Saperstein, director of the Reform movement’s Religious Action Center and a doyen of liberalism, joined James Woolsey, a neoconservative icon and former CIA director, in a discussion on energy independence.

The liveliest session, delegates said, was when Jennifer Laszlo Mizrahi, founder and president of The Israel Project, faced off against author Peter Beinart, who argued in a controversial essay last year that reflective defense of Israel in the public sphere is alienating Jewish youngsters.

Michael Oren, Israel’s ambassador to the United States, addressed the widening gap between the Israeli and American Jewish communities. Young Jews in Israel, he said, have more in common with the Druze and Bedouin with whom they serve in the army than with American Jewish college students.

Oren said it was critical to overcome what can seem like “unbridgeable schisms” between Israelis and Americans.

“We are united at the heart, a rambunctious, often fractious people,” he said. “While the experiences of American Jews have made them more liberal and progressive, impelled by our traumas and our disappointments, Israelis have become somewhat skeptical of peace.”

Despite his plea for dialogue, Oren was among those who boycotted the J Street conference last month after a campaign by mainstream and right-wing pro-Israel groups to keep centrist and Israeli figures away from the conference.

In a separate appearance at the JCPA plenum, Rep. Keith Ellison (D-Minn.), the first Muslim elected to the U.S. Congress and a J Street favorite, told a questioner who urged him to denounce those who describe Israel as an “apartheid” state that such rote statements are besides the point.

The applause for Ellison underscored the continued liberal bearings of a large segment of the Jewish community. So did the warm reception accorded Valerie Jarrett, President Obama’s top domestic policy adviser, who revealed in her address that her great-grandfather was Jewish.

Jarrett went out of her way to suggest that tensions over Israel between organized Jewish groups and the Obama administration were overstated.

She referred to the March 1 meeting between Obama and the Conference of Presidents of Major American Jewish Organizations, saying that the president “made clear that while the region will evolve, some things will never change. Among them is his unshakeable support for Israel’s security; his opposition to any effort to delegitimize Israel, or single her out for criticism; and his commitment to achieve a peace that will secure the future for Arabs and Israelis alike.”

The meeting’s participants described the meeting as friendly, but some were rankled by Obama’s remark that they and Israeli leaders should “search their souls” about whether Israel is serious about peace.

Most of Jarrett’s speech was devoted to the president’s domestic agenda and his efforts to push back against plans by the Republican-led House of Representatives to slash spending on education and infrastructure and assisting struggling families. She pitched legislative efforts to close the income gap between men and women.

“Now that two-thirds of all families depend on two working parents, when women make less than men for the same work, or when women go into low-paying jobs, it affects the entire family,” she said.

Jarrett’s message of sustaining the social net resonated with a JCPA agenda that focused, in resolutions and in Hill lobbying, on alleviating poverty.

JCPA’s seven resolutions hewed more to the Democratic agenda than to Republican goals — unsurprising for a community that still consistently votes Democratic in substantive majorities. A resolution on supporting the elderly poor called for “robust funding” of anti-poverty programs, and one on immigration rejected efforts by some Republican lawmakers to remove “birthright” citizenship from children born here to illegal immigrants.

A measure on peacemaking hewed to the mainstream pro-Israel consensus, blaming the Palestinian leadership for scuttling peace talks by insisting on a settlement freeze and pushing for international recognition of a Palestinian state.

The Reform movement proposed a passage that called on Israel “to meet its obligations under prior agreements” and “avoid actions that do not enhance security” — a reference to expansion of Jewish settlements in the West Bank — but it was rejected.

Sen. Mark Kirk (R-Ill.), the conference’s most senior Republican speaker, recognized the community’s Democratic tilt in his address Tuesday morning, before delegates lobbied their representatives. Glancing through the JCPA’s agenda, Kirk noted that as a moderate Republican he supported much of it, including two initiatives against discrimination against gays.

“I was one of the few Republicans that voted to eliminate the ‘don’t ask, don’t tell’ policy,” he said, referring to last year’s repeal of a law that forced gays in the military to hide their sexual orientation.

That was greeted with applause.

“It appears I will become the lead Republican on the Employment Non-Discrimination Act,” he said, referring to a law that would end sexual orientation discrimination in the workplace.

He looked up; more applause.