Knesset hearings on J Street up ante in debate about ‘pro-Israel, pro-peace’ lobby 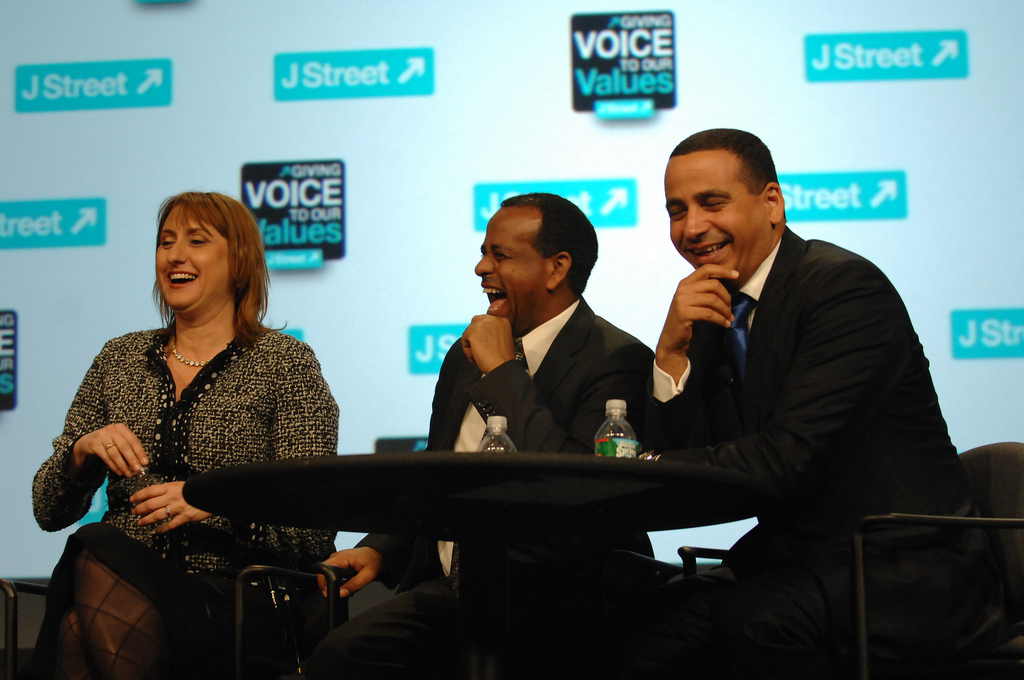 Left to right, Knesset members Orit Zuaretz, Shlomo Molla and Yoel Hasson of the Kadima Party attending J Street's conference, Feb. 27, 2011. The Knesset is holding hearings into the group and calling on lawmakers who attended the conference to testify. (Courtesy J Street)
Advertisement

WASHINGTON (JTA) — Is turnabout fair play when Israel examines the critics who would examine its actions?

Groups on the Jewish left expressed outrage last week after the Knesset subcommittee on public diplomacy voted to convene hearings on J Street, the Washington-based lobby that calls itself “pro-Israel, pro-peace.”

The hearing is set to take place next week, and J Street director Jeremy Ben-Ami and Davidi Gilo, an American Israeli who is a major funder of the group, have agreed to testify.

“We believe such a Knesset discussion is unprecedented in the history of Israel,” J Street said in a statement. “It appears to be one more regrettable step by a small but growing group of anti-democratic forces in Israeli politics to limit debate and to intimidate those with whom they disagree.”

The reference to “one more regrettable step” was to Knesset hearings that would have targeted Israeli nongovernmental organizations tracking Israel’s treatment of the Palestinians. Israeli Prime Minister Benjamin Netanyahu quashed those hearings after complaints by mainstream pro-Israel groups that targeting human rights watchers undercut Israeli democracy.

Unlike the NGO hearings, the J Street hearings do not appear aimed at placing legal limits on the group’s activities in Israel. Rather, suggested Israeli Knesset member Otniel Schneller of Kadima, they are about clearing up whether or not J Street is misrepresenting itself when it calls itself pro-Israel.

“I asked for the hearing not because of the content of J Street’s beliefs, but because I want to look into the commitment of Jewish love and support for Israel,” Schneller told The Jerusalem Post. “If they don’t love and support Israel, then they should not present themselves as pro-Israel.”

Likud’s Danny Danon, the chairman of the Knesset subcommittee that will be holding the hearings, plans on asking Kadima Knesset members who attended J Street’s conference last month about their participation in the event.

“During the midterms, we saw congressional candidates lose elections partially because of their support for J Street,” Commentary magazine blogger Alana Goodman wrote. “But is this a sign that J Street is now starting to hurt politicians on an international level?”

“I would hope that the Israeli Knesset had better things to do than hold hearings on American Jewish organizations or American organizations,” he told JTA. “It’s inappropriate, it’s counterproductive — it’s beyond their purview and jurisdiction. There’s nothing positive that could be achieved from any of it.”

But Morton Klein, the president of the Zionist Organization of America, said the hearings could be clarifying. He referred to revelations last year that J Street got a big chunk of its funding from George Soros, the billionaire philanthropist who has been harshly critical of successive Israeli governments.

“It’s fine for Israel to determine who is behind this organization, who is funding it, for people to know,” Klein said.

The goal of the hearings seems to be to create an atmosphere that would discourage any Israeli affiliation with the group, J Street backers warn.

“After aggressively attacking dissenting voices in Israel and trying to suppress diversity at home, some Israeli legislators are now extending their intimidation campaign across the ocean,” said Debra DeLee, the president of Americans for Peace Now. “The attempt to delegitimize an American organization that supports Israel and works tirelessly to engage tens of thousands of Americans in pro-Israel activity is bad for Israel.”