Hoenlein denounces lack of outrage after naming of square after terrorist 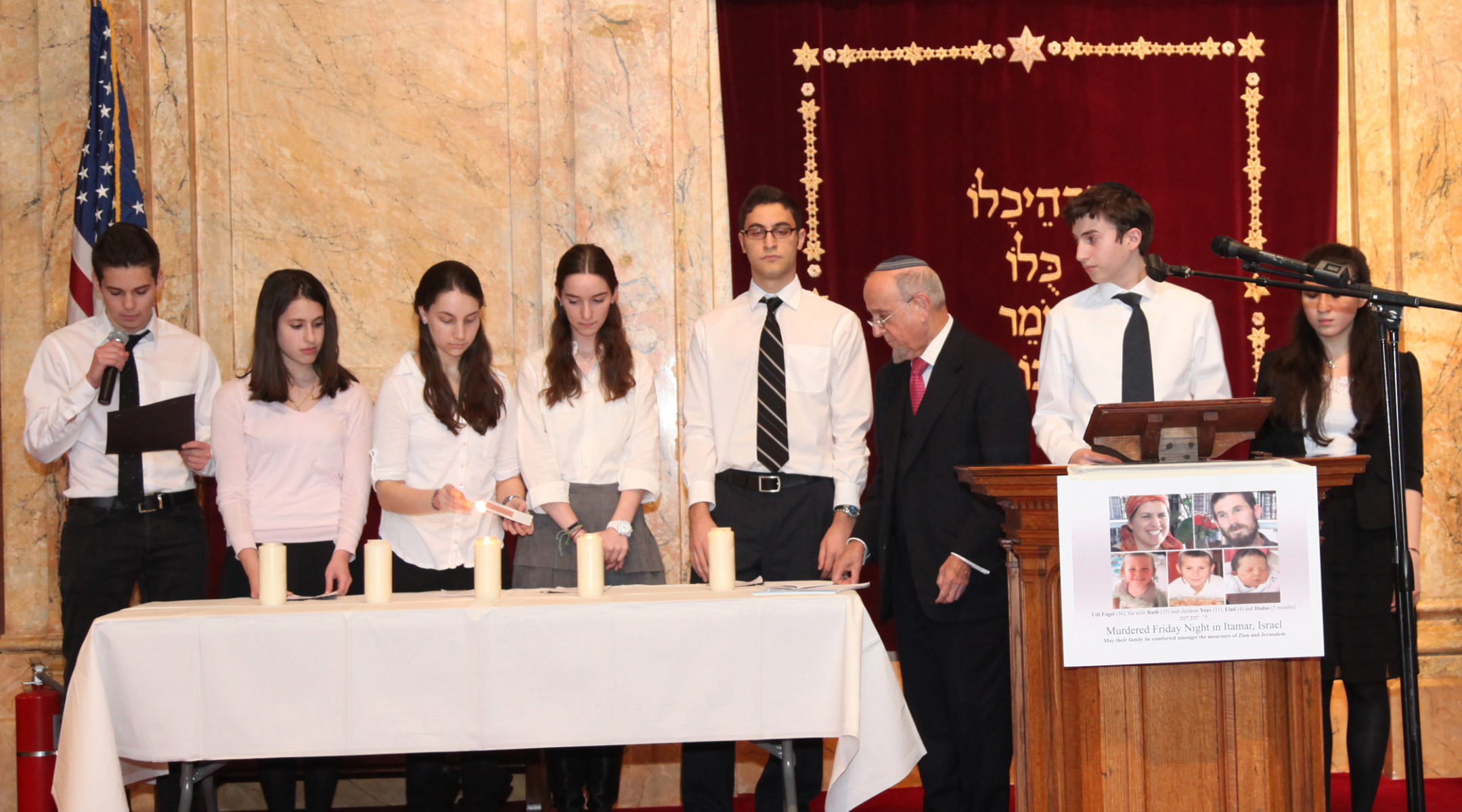 Rabbi Haskel Lookstein, third from right, and students from his Ramaz Upper School in New York City lighting candles at a memorial at Congregation Kehilat Jeshurun in Manhattan for members of the Fogel family killed in their West Bank home, March 17, 2011. (Courtesy of Conference of Presidents of Major American Jewish Organizations)
Advertisement

NEW YORK (JTA) — Presidents Conference leader Malcolm Hoenlein slammed governments, including the Obama administration, for not denouncing the naming of a square in a West Bank town after a terrorist.

Hoenlein, the executive vice president of the Conference of Presidents of Major American Jewish Organizations, made his comments Thursday in New York at a memorial service for the parents and three children of the Fogel family who were murdered March 11 in the West Bank settlement of Itamar.

“If governments, even our own, do not stand out and shriek and condemn and take action when they see this kind of action by the Palestinian Authority and their representatives” — and the incitement continues despite repeated promises — then “we must make sure that our voices are heard,” Hoenlein said. “We have to demand accountability and that there will be consequences.”

Hoenlein compared those behind the killings to Nazis, and said they were “likely driven by a vicious hatred fostered by the continuous anti-Israel and anti-Jewish incitement of their  political and religious leaders, starting with” Palestinian Authority President Mahmoud Abbas and Prime Minister Salam Fayyad.

The naming of the square, which took place just two days after the murders, drew a relatively muted response from the White House — relatively low-level officials said they were seeking clarification on the matter and denounced incitement by “all parties.”

Those spokespeople, at the White House and at the State Department, responded only after calls from JTA. They called “disturbing” reports that Palestinian Authority officials attended the renaming of the square for a terrorist, Dalal Mughrabi, who was involved in killing 37 Israelis.

Hoenlein also decried responses around the world to the murders, describing them as “a balanced statement or at most a lip-service condemnation.”  He said, “Where is the outrage? Where is the indignation?”

Ruth and Udi Fogel and three of their six children — Yoav, 11; Elad, 4; and Hadas, 3 months — were stabbed to death as they slept in their Itamar home. Israeli and Palestinian forces are still searching for the perpetrators.

The White House response, which condemned the murders as “terrorism” and said “there is no possible justification for the killing of parents and children in their home,” was issued in the name of the White House spokesman, Jay Carney.

President Obama has yet to pronounce on the killings, although U.S. Secretary of State Hillary Rodham Clinton condemned what she called the “inhuman” killings “in the strongest possible terms.”

Hoenlein was addressing the memorial at Congregation Kehilat Jeshurun in Manhattan.

The Anti-Defamation League and the Zionist Organization of America also issued statements saying the State Department statement was inadequate.

“We respectfully suggest that a forceful, unequivocal, and public condemnation of incitement must be heard around the world and should also be directed to all Palestinians through their media,” the ADL said in a letter to Clinton.

The ZOA said the Obama administration had “refused” to condemn the attack despite pleas from the group and others. “To our shock and dismay, President Obama and Sec’y Clinton have refused to condemn this vile, almost Nazi-like Fatah ceremony,” ZOA President Morton Klein said in a statement. “We condemn him for this disgraceful failure and silence.”

Pro-Israel officials, speaking on background, also have said they were irked by the State Department’s expression of “deep concern” after Prime Minister Benjamin Netanyahu announced 500 new housing starts in West Bank settlement as a response to the murders.

Palestinians in an official March 13 ceremony named a town square in Al-Bireh, near Ramallah, for Mughrabi. Members of Palestinian Authority President Mahmoud Abbas’ Fatah faction were on hand for the unveiling of the plaque in her memory. No PA government officials attended the ceremony, according to Reuters.

Mughrabi was killed in a 1978 bus hijacking on Israel’s coastal road. She had directed the hijacking of two buses on the coastal road between Haifa and Tel Aviv, which led to the murder of 37 Israelis, including 13 children.