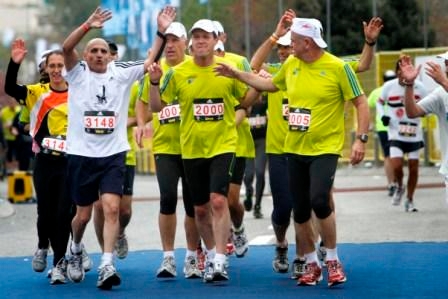 Race to the (wrong) finish

With all the twists and turns in Jerusalem, perhaps it was no surprise that the first three runners to complete the city’s first official marathon ended up at the wrong finish line.

Three Kenyans mistakenly ended up at the finish line for the half-marathon, but they were still credited with their spots in the international event after their official finish times were calculated.

Some 1,500 runners from around the world, including Jerusalem Mayor Nir Barkat, participated in the 26.2-mile race on March 25. More than 8,000 competed in the half-marathon and 10K races.

The marathon took place just two days after a bomb attack in central Jerusalem left a British tourist dead and more than three dozen people were injured. No runners reportedly withdrew due to the attack.

Nearly two decades after his last concert here, Bob Dylan is making his way back to Israel.

Dylan agreed to play Tel Aviv in June during the middle of his world tour following lengthy negotiations between his people and Israeli concert promoters. The folk rock icon last played Israel in 1993; he also had performed here in 1987.

He is among several musical heavyweights coming to Israel, notably the teen sensation Justin Bieber, who will be performing April 14. Less than a week later the British singer Bryan Ferry, who reached the heights of his popularity in the 1970s and ’80s, also will perform in Tel Aviv.

Megadeth will play Tel Aviv in May — the heavy metal band’s fourth appearance in Israel. Its former guitarist Marty Friedman, who is Jewish, will perform a solo show on May 31.

Finally, Irish musician Bob Geldof, who in 1985 staged the Live Aid charity concert to help famine-stricken Africa, will visit Israel for the first time in May to receive an honorary doctorate from Ben-Gurion University of the Negev. The award will honor his successful musical career and his charitable activities.

While in Israel, Geldof also will participate in the conference “Israel in Africa: Past, Present and Future,” organized by IsraAID-The Israel Forum for International Humanitarian Aid.

When is an underground parking lot not for cars?

When it becomes an underground hospital able to provide protection against conventional, chemical and biological attack.

Ichilov Hospital in Tel Aviv in March unveiled the largest bomb-proof medical facility in Israel. The building, which goes four stories underground, can hold up to 1,000 hospital beds. The facility will be able to function for a week without external power sources.

When not needed as an emergency hospital, the below-ground floors will be used for short-term parking for patients.

Tel Aviv is the new home for a technological research and development center for Barclays Capital.

The IDEC, or Israel Development and Engineering Center, will provide development and engineering services that will support the international finance operations of Barclays Capital.

The financial group is taking advantage of the Israeli government’s Comparative Advantage program, created by the Ministry of Finance and Industry to encourage the establishment of knowledge-based industries in Israel. The program includes tax breaks and subsidizing some labor costs.

Israel already is the site of R&D centers for global behemoths such as Intel, IBM, Motorola, Cisco and Hewlett-Packard. All told, some 35,000 Israelis are employed in R&D.

Something old, something new

The rededicated Hurva Synagogue located near the Western Wall in the Old City of Jerusalem’s Jewish Quarter hosted its first official wedding ceremony since its destruction in 1948.

The ceremony was held in the synagogue courtyard. Prior to its rebuilding and rededication, couples were married among the synagogue’s ruins. A second wedding took place several days later.

While the wedding in March is the first official chupah to be held at the synagogue since its rededication, a video on YouTube and several bloggers are reporting that a chupah actually took place in front of the synagogue on the day of the rededication last year, when a young American soldier, his Ethiopian bride and their handful of guests came to the Old City in search of a place to hold a chupah. The guests from the dedication ceremony reportedly remained and danced the couple to their chupah.

The mostly haredi Orthodox city of Bnei Brak is planning its own version of Central Park for city residents.

The plan for the 105-acre park along the Yarkon River includes an artificial pond with observation posts, footpaths, bicycle trails, a skateboard park and extreme sports fields, picnic areas and a promenade, Ynet reported.

Property taxes will fund the project.

Some 500 senior civil servants, including government ministers, have upgraded to the iPhone 4 in recent weeks, according to Globes.

Up to 2,000 government employees are eligible for the upgrade. Israeli Prime Minister Benjamin Netanyahu has not yet asked for an upgrade, according to Yediot Achronot.

Fashion-forward consumers looking for clothes in the Urban Outfitters spring catalog will enjoy Israel in the background.

The American fashion chain spent a week photographing fashion models at popular and scenic sites throughout the country, including Dead Sea, the Judean Desert, Jaffa and the Tel Aviv coast. The models also were given cameras to photograph their own experiences.

The photos taken in Israel are published in the brand’s catalog, and posted on its Facebook page and blog.

In other fashion news, Ivanka Trump has signed a deal to import and market her line in Israel. The daughter of Donald Trump, who recently converted to Judaism, will begin selling her accessories for women in Israel next August. She also plans to open a store in central Israel.

Meanwhile, senior buyers for the French cosmetic chain Sephora visited Israel to discuss collaborations with some Israeli cosmetics companies. The chain doesn’t have plans to open stores in Israel.

The new face of currency

A new series of Israeli banknotes will feature some beloved national poets.

Bank of Israel Governor Stanley Fisher in March announced the personalities who will grace the new notes in denominations of 20, 50, 100 and 200 shekels: Natan Alterman, Leah Goldberg, Shaul Tchernichovsky and Rachel the Poetess.

The list was finalized following more than a year of heated debate and still must be approved by the government. Others considered for notes’ appearances were writer Shai Agnon and former prime ministers Menachem Begin and Yitzhak Rabin.

The members of the Committee for the Planning of Banknotes, Coins and Commemorative Coins, and Fisher said in a statement that featuring these personalities on the banknotes will “help to instill in the younger generation of Israelis an appreciation of their contribution to Israeli society and to the state.”

Alterman, an author, playwright, poet and newspaper columnist who died in 1970, won the 1968 Israel Prize for Literature. Rachel, who died in 1931, is a leading poet in modern Hebrew whose works have been set to music.

Goldberg, who died in 1970, was a poet, author, playwright, literary translator and researcher of Hebrew literature who translated “War and Peace” into Hebrew. Tchernichovsky was a two-time winner of the Bialik Prize for Literature.

The current faces on Israeli currency are former Prime Minister Moshe Sharett on the 20 shekel note; Agnon on the 50 shekel note; and former presidents Yitzhak Ben- Zvi and Zalman Shazar on the 100 shekel and 200 shekel notes.