Five years on, Shalit’s imprisonment an open wound for Israel 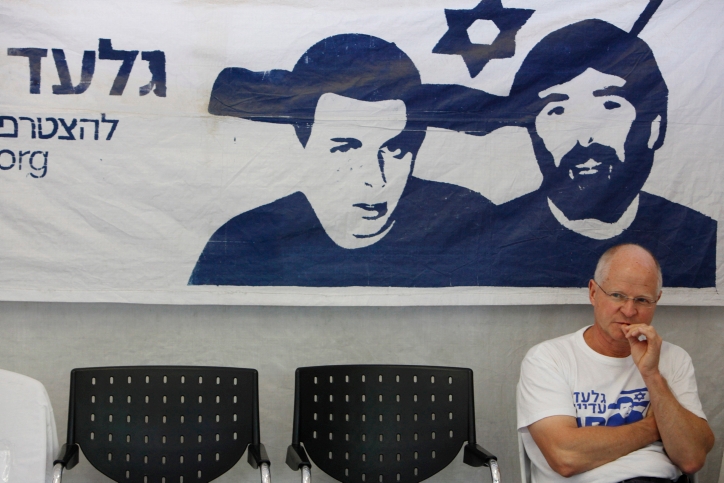 JERUSALEM (JTA) — Michal Naamani traveled to Jerusalem from her home near Kfar Saba to hand out yellow ribbons to passers-by and bumper stickers to motorists reading “Gilad is alive.”

Naamani, a high school teacher, felt that she wanted to do something to help captive Israeli soldier Gilad Shalit.

“I’m a mother. I have a younger brother doing reserve duty,” Naamani told JTA on Friday, the day before the ifth anniversary of Shalit’s capture in a raid on the Gaza-Israel border that left two other soldiers dead. “I’m here because if it was my son, I would want someone to support me as well.”

Shalit’s family members have done practically everything they can think of to keep Gilad in the public eye.

Last year they marked the anniversary of his capture by marching from their home in northern Israel to Jerusalem, with thousands of Israelis joining them for part of the way. This year Gilad’s older brother, Yoel, disrupted Israel’s state ceremony on Israeli Independence Day.

“We say to Israeli Prime Minister Benjamin Netanyahu, you have no mandate to sentence Gilad to death,” Noam Shalit, Gilad’s father, said during a news conference Sunday morning outside the prime minister’s official residence in Jerusalem, where the family announced a new campaign to garner more tangible public support for striking a deal to bring home Shalit.

Shalit family members chained themselves together outside the residence in Jerusalem on Saturday night, as hundreds of supporters gathered in support. Others protested outside Netanyahu’s home in Caesarea.

Meanwhile, dozens of Israeli celebrities and politicians marked 24 hours beginning Saturday night at Herzliya Studios, Israel’s largest TV facility, with each spending an hour in “solitary confinement” in solidarity with the captured soldier.

Netanyahu, meanwhile, announced that his government had accepted a German-mediated deal to free Shalit.

“This proposal was harsh; it was not simple for the State of Israel,” Netanyahu said Sunday in a statement released after the weekly Cabinet meeting. “However, we agreed to accept it in the belief that it was balanced between our desire to secure Gilad’s release and to prevent possible harm to the lives and security of the Israeli people. As of now, we have yet to receive Hamas’s official answer to the German mediator’s proposal.”

Netanyahu did not specify the terms of the proposal, but said that “The State of Israel is ready to go far, more than any other country, in order to secure Gilad’s release but it is my responsibility, and the responsibility of those who are sitting here, to see to the security and lives of the Israeli people.”

Five years on and without a clear sign that a prisoner-exchange deal with Hamas is in the offing or even that their son is still alive, the Shalits have become a symbol of what Israelis — whose children are subject to mandatory military service — fear most.

Some Israelis say that Shalit also has become a symbol of Israelis’ frustration with Hamas, the terrorist group that rules the Gaza Strip and is believed to have authority over Shalit’s captors. A few Israeli military officials have expressed concern that Shalit’s capture might sap motivation among young Israelis to sign up for combat units in the Israel Defense Forces.

But Meir Elran, an expert on the Israeli army at the Institute for National Security Studies in Tel Aviv, says motivation remains high.

“Thousands and thousands of people were killed in battle in the last 63 years,” he said. “People who go to combat units know that this is a dangerous business and you take a risk of not coming back.”

Shalit was 19 when he was taken captive. Assuming he is alive, he is now 24. Despite repeated requests, including one this week, the Red Cross has never been allowed to visit Shalit.

He is believed to be held somewhere in Gaza, probably in an underground bunker. His face has become ubiquitous in Israel — seen on posters, balloons, T-shirts and bumper stickers. The Israeli public has not received any sign of life of Shalit since September 2009, when a video was released showing him looking wan but unharmed. Hamas has rejected an appeal by the Red Cross for a new video.

For several years, Israel has been negotiating with Hamas indirectly over Shalit. Hamas’ demands have not changed: the release of 1,000 Palestinian prisoners from Israeli jails, among them dozens of men convicted of murdering Israelis.

Netanyahu announced this week that because Hamas would not allow Shalit a Red Cross visit, Israel would be stiffening conditions for Palestinians in Israeli jails convicted of terrorism, among other things eliminating their ability to obtain an academic degree while in prison.

A survey released this week found that 63 percent of Israelis support a deal to free Shalit. There has been a flurry of diplomatic activity in recent weeks and even rumors that the deal was on the verge of being signed. Some Israeli analysts say that Hamas needs the PR boost that a large-scale prisoner release would [rovide, especially if Palestinian elections take place in the next year.

Yet unless Hamas significantly softens its demands, the chances of a deal appear slim.

Schoffman says this has fueled public displeasure with Netanyahu.

“It has exacerbated dissatisfaction with the current government, regardless of one’s political affiliation,” he said. “Most Israelis say, ‘make this happen already,
this is outrageous.’ ”

Israel has agreed to swap deals with terrorist groups twice in recent memory.

In 2004, Prime Minister Ariel Sharon agreed to a prisoner exchange for Israeli businessman Elhanan Tannenbaum, a reservist in the Israeli army who was lured to Lebanon for a prospective drug deal and then taken hostage by Hezbollah. Israel released 435 Lebanese prisoners in exchange for Tannenbaum and the bodies of three Israeli soldiers Hezbollah had in its possession.

In 2008, Prime Minister Ehud Olmert agreed to release five prisoners, including a notorious Lebanese man serving four life sentences for murder, in exchange for the bodies of two Israeli soldiers. The soldiers, Ehud Goldwasser and Eldad Regev, were taken captive days after Shalit’s capture in a Hezbollah attack thought to have killed them and which sparked the 34-day war between Hezbollah and Israel in 2006.

On Friday, Shalit’s parents, Noam and Aviva, spent the morning at a memorial ceremony for one of the soldiers who was killed the day that Shalit was captured. Then they came to Jerusalem to spend Shabbat in the protest tent opposite the prime minister’s residence, a fixture now for several years.

“We’re different from other countries that would never let 1,000 prisoners go for just one soldier,” said Naamani, the teacher. “He went to protect this country, and we owe it to him and his family to bring him back.”