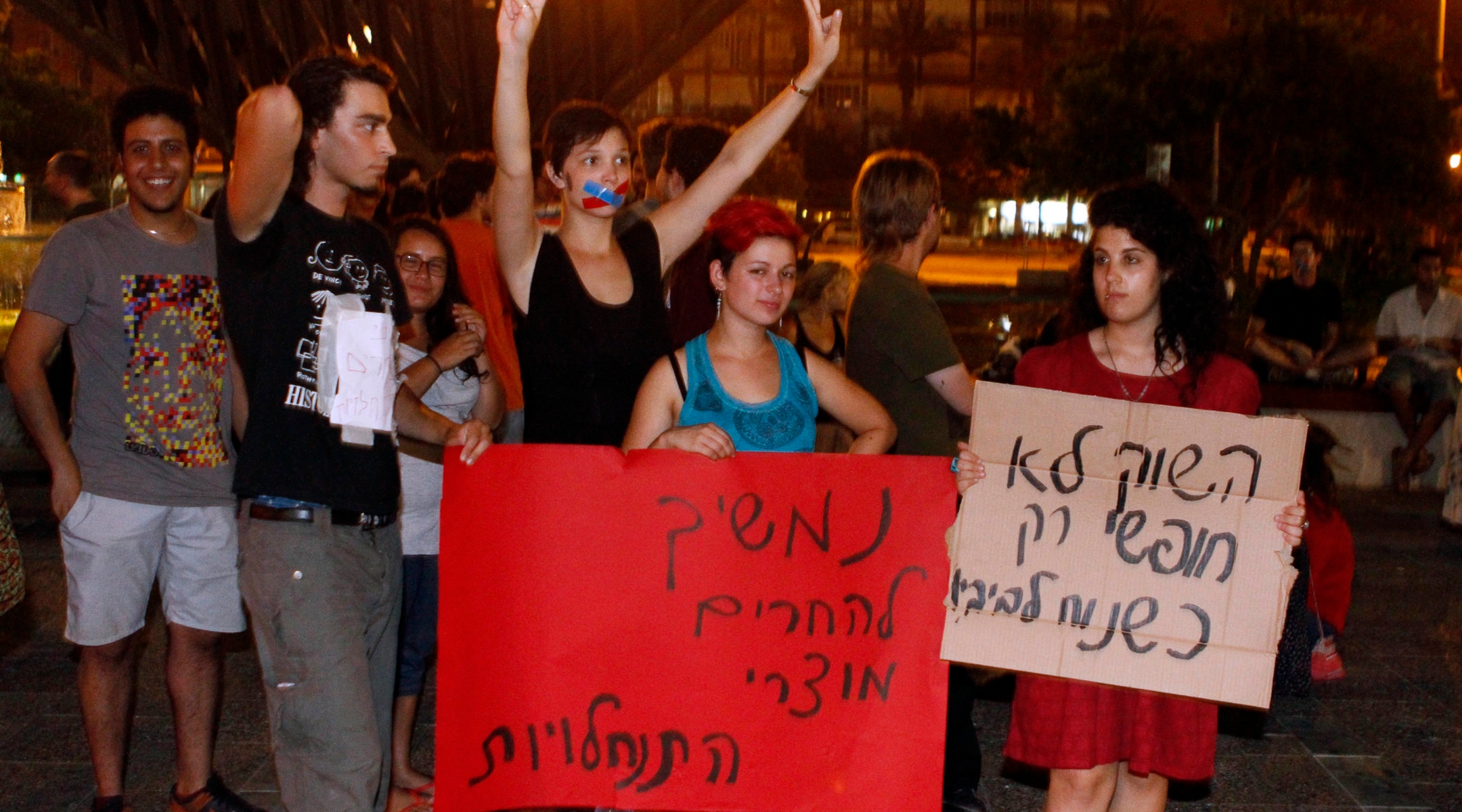 U.S. Jewish groups are consulting with one another on what next steps to take to counter Israel's new anti-boycott law, a measure these activists are protesting in Tel Aviv's Rabin Square, July 13, 2011. ( Uri Lenz/ Flash 90 )
Advertisement

WASHINGTON (JTA) — American Jewish groups that have spoken out against Israel’s new anti-boycott law aren’t stopping there — now they’re speaking with each other on further responses.

“We’re all in communication with each other about these things,” said Daniel Sokatch, the president of the New Israel Fund, a U.S.-based funder of Israeli civil rights groups.

Sokatch said the cooperation was low key for now, that it was at the level of each group knowing what the others are up to in terms of pressing Prime Minister Benjamin Netanyahu’s government to ameliorate the law.

“Those who are concerned are mindful of what the other groups are doing,” Sokatch explained, saying that the most recent call took place Monday morning.

Sokatch declined to name the other groups involved, but officials at leading centrist groups confirmed that such calls were taking place.

Centrist groups that have spoken forcefully against the law include the Anti-Defamation League and the American Jewish Committee. On the right, the Zionist Organization of America has said that it understands Israel’s need to push back against those who would delegitimize the nation but that it opposes laws of this sort in principle.

The anti-boycott law approved July 11 by the Knesset provides for civil sanctions against supporters of boycotts targeting Israel or its West Bank settlements. Those harmed by boycotts can file civil lawsuits seeking monetary damages from those who advocate or organize such boycotts.

Some Jewish groups have expressed the hope that Israel’s Supreme Court will strike down the new anti-boycott law.

Americans for Peace Now announced Tuesday afternoon that it was backing its Israeli sister group’s boycott of settlement products that was launched to challenge the new law.

“Like Peace Now, we recognize that fundamentally this new law is not about boycotts or even, truly, about settlements,” APN said in a statement. “It is about stifling dissent, smothering activism, and suppressing freedom of expression.”

Sokatch said that NIF would launch fundraisers for Israeli civil rights groups, such as the Association for Civil Rights in Israel, to support their efforts to defend those targeted under the new law.

“We will raise money for those defending free expression rights who are  fighting lawsuits by the settler movement,” he said.

Otherwise, he said that NIF was looking to fund more civil liberties lobbyists in the Knesset, particularly amid the push by some members of Israel’s right-wing governing coalition for legislative inquiries into nongovernmental groups.

Officials from centrist U.S. Jewish groups said they were making their concerns about the anti-boycott law known through their contacts in Netanyahu’s government. Though he was absent for the Knesset vote on the anti-boycott legislation, Netanyahu has since expressed his strong support for the law.

Defenders of the new law point out that it resembles U.S. laws banning cooperation with Arab League secondary and tertiary boycotts of Israel.

“Every nation has laws against conspiracies to cause economic harm,” Eugene Kontorovich, a law professor at Northwestern University, wrote in The Jerusalem Post.

“Antitrust laws prohibit speech when its purpose is to unfairly cause economic harm. And the common law makes it a tort to ‘interfere with prospective business advantage,’ i.e. scaring off someone’s customers.”

Opponents of the new Israeli law say that such comparisons are specious.

“What U.S. law bars is participation in unsanctioned boycotts and embargoes imposed by other countries that conflict with U.S. policies — including but not limited to the (effectively moribund) Arab League boycott of Israel.”