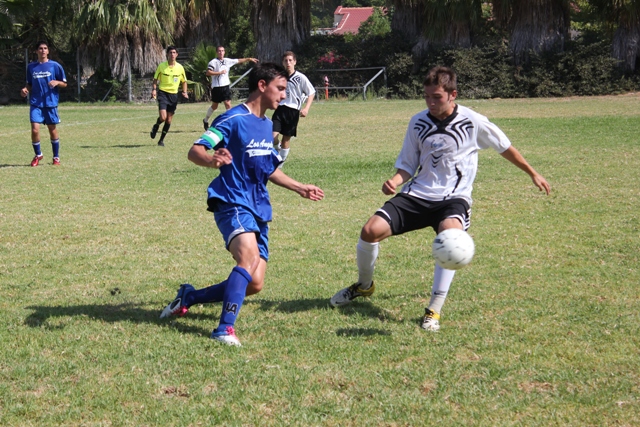 With Birthright Israel offering free trips to 18- to 26-year-olds, parents are wary of shelling out cash for their high school-aged children to visit the Jewish state when they know a freebie is right around the corner.

For the JCC Association of North America, it is an acute problem. Last summer, only 160 teenagers from JCCs, camps and other institutions came on trips organized by the association. This year, JCC Association officials were expecting 210.

Some 900 students from middle school and high school came to Israel for the 30th annual JCC Maccabi Games and ArtsFest, which runs through Aug. 5. They brought with them several hundred coaches and family members, as well as an “American Idol” finalist.

“For me to be able to stand here with my family in Israel and watch them stand with their teammates and sing ‘Hatikvah’ is an unbelievable experience — it is just giving me chills,” Joanne Williams, a mother of six from Columbus, Ohio, told JTA at the Kiryat Shemona soccer stadium where the gala opening ceremonies were held.

For 15 years, Williams has traveled across the United States every summer to watch her children compete against teens from other JCCs at the annual games. The games are organized jointly by the JCC Association and the Maccabi World Union, which puts together Jewish sporting events the world over, including the so-called Jewish Olympics: the Maccabiah Games, which are held in Israel every four years.

If the JCC competition was coming to Israel, Williams decided, she and the rest of her family would come, too. She had never been to Israel before.

The fact that the games were being held in a part of Israel that was besieged by rocket attacks five years ago, during the 2006 war with Hezbollah in Lebanon, did not deter Williams.

For organizers, putting the games in northern Israel was key. Israel is trying to boost investment and tourism in the North — far from where the vast majority of Israelis work and live — so the JCC Games were able to receive subsidies and support from four separate Israeli government ministries.

“The dream of doing these games in Israel has been around for more than 10 years, and we have tried for many years to figure out how it would be feasible,” said Amir Peled, a member the Maccabi World Union executive and chairman of the 2013 Maccabiah Games. “Once it was established and stipulated that we would do it in the North, which would bring tremendous benefits to the region, they really moved forward.”

“The interest level and the response was tremendous,” said Allan Finkelstein, the president of the JCC Association.

The 900 U.S. and Canadian teenagers came to compete in soccer, basketball, volleyball, table tennis and swimming. Delegations from South Africa and Israel also participated in the competitions.

The sporting events took place in six different villages in the northern Galilee near Kiryat Shemona. On Shabbat, the games organized home hospitality for the athletes, sending the teens to whichever city in Israel was the Jewish federation sister city of their hometowns.

Williams’ daughter Rachel, 15, a basketball player, spent a week before the games in Columbus’ sister community, Kfar Saba. The teens from her host Israeli family were invited to participate in the games together with several hundred other young Israelis.

As fireworks exploded during the team’s Olympics-style march into the stadium on opening night, Rachel and the teens from the Kfar Saba group chatted like old friends.

“When we met in Kfar Saba a week ago, it felt awkward and forced, but we are now really close,” Rachel said.

Designed to foster Jewish identity through sports, the JCC Games began in 1982 with 300 participants. Today they take place in three host communities each summer and involve thousands of teens. This year, in addition to Israel, competitions were held in Springfield, Mass., and Philadelphia.

Six years ago, the JCC Association decided to broaden its outreach to teens by adding an arts component to the games. The ArtsFest includes workshops in music, dance, broadcast journalism, photography, visual art and food.

One ArtsFest participant, Brett Loewenstern, reached the final 24 contestants of Fox’s “American Idol.” In an interview with JTA, the slender Florida teen with a mane of red hair credited ArtsFest with encouraging his interest in music and boosting his confidence after he was bullied as a child.

“The JCC and the ArtsFest is where I got my musical start,” Loewenstern said. “It gave me experience, confidence and a strong second family. I got such great experience there being a performer and being part of a band.”

In Kiryat Shemona, Lowenstern was afforded star treatment, performing the song “Bring ‘Em Home,” dedicated to captive Israeli soldier Gilad Shalit, and advising participants in the music workshop to “have confidence, believe in themselves and just cut loose.”