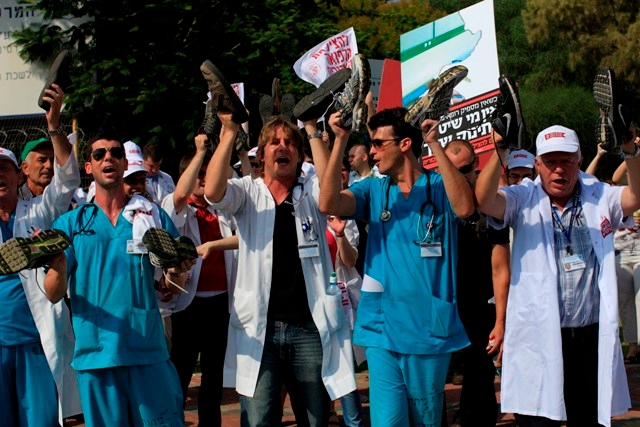 Israeli specialists holding their shoes during a demonstration by doctors outside Barzilai Medical Center in Ashkelon, July 26, 2011. (Tsafrir Abayov/Flash90)
Advertisement

JERUSALEM (JTA) — Thousands of Israeli doctors spent the last four months engaged in a nationwide strike, using work stoppages, YouTube videos and a final hunger strike by disgruntled medical residents to protest their wages and working hours. Now that the doctors’ strike is over, Israelis are debating whether a raise in wages and shorter workdays can offset the deeper problems plaguing their country’s socialized health system.

“We have an excellent system with a lot of good manpower, but we’re losing ground in its funding and organization,” he said. “It’s a system afflicted with narrow interests that undermine the public nature of the system.”

The crux of the strike was about more money and less time at work. Doctors working in a public hospital or HMOs currently earn approximately $7,000 a month working a 42-hour week and seeing patients every 10 minutes at the HMOs. By the end of the strike, doctors received a gradual salary increase for those working extra shifts, more regulation of working hours — they’ll have to punch a time clock — and a promised addition of 1,000 doctors at the hospitals. But doctors are still disgruntled.

With roots dating back to the British Mandate, Israeli medical care has traditionally offered universal health care administered by four “kupot cholim,” or HMOs, that were initially set up by the country’s labor unions before the state was established. Patients saw their doctors at the HMO and went to the mostly state-owned hospitals when necessary. Many doctors split their time between the HMOs and hospitals.

There was a gradual yet seismic shift in the system. As Israelis grew wealthier and the population aged, demand grew for a different kind of health care — one that offered more care, advanced technology and more client choice. Israelis wanted the advantages of private care, and the health care system ended up providing it, albeit through a back door.

Most doctors remained at the public hospitals and HMOs, but many began moonlighting, seeing patients privately and scheduling procedures outside the confines of the public health system. In 1995, a health care reform law allowed HMOs to begin creating optional supplementary medical insurance that Israelis could purchase and which allowed them greater access to affordable private care.

While all Israelis are required to sign up with one of the HMOs for a basic package of government-funded health care packages, some 80 percent of Israelis now hold supplementary medical insurance that covers a portion of private care, according to Chernichovsky’s research.

Private hospitals and private practices have flourished as patients turn to them for surgeries and procedures that are funded primarily by their supplementary medical insurance.

For doctors with private patients, the shift toward more private care funded by supplementary health insurance has resulted in more income earned outside the public hospitals and HMOs. Doctors often leave their public posts early in the day to provide the privately funded care.

“Everyone’s running to private medicine, especially since the strike,” said Yisrael Barel, a regional manager for HMO Leumit in Netanya. “The senior doctors don’t like to operate in the public system and push customers to do it privately. I recently called a friend, a top surgeon, to ask him to take care of a patient, and he said, ‘You expect me to do private medicine in a public hospital?’ ”

Israel’s health system has become a hodgepodge of socialized medicine mixed with private practice. The entire wage structure of senior doctors is based on the assumption that they will moonlight, working two to three jobs, including at a public hospital where they can then refer patients to their private practice. To the younger doctors, it’s a system that makes no sense.

“You have to look at the strike of the young doctors against the background of the protests in the general Israeli public,” said Dr. Dov Guverman, a senior official at Israel’s Health Ministry. “It’s a new generation of people who aren’t willing to accept the old system.”

Guverman blames the situation on the Health Ministry’s acceptance 16 years ago of the legal provision allowing the HMOs to sell supplementary health insurance.

The country’s shift toward private medical care is “our fault, and it’s something that we failed to reorganize,” he said. “It’s created a significant impairment of the health care system, and I don’t see any immediate solutions for that.”

Medical residents all over the Western world earn too little, work too hard and complain, said Dr. Uzi Beller, chairman of the department of gynecology at Shaare Zedek Medical Center in Jerusalem, but elsewhere they usually know “that there is a horizon of decent income.”

In Israel, however, “the salaries are very poor, and I can tell you that as a chairman of a department with tenure and a full professor position in the university, my income is always less than $2,858 [after taxes],” Beller said. “So we all have to earn from private practice.”

Beller, however, can see his private patients at Shaare Zedek. Unlike other Israeli hospitals, Shaare Zedek and Hadassah Medical Center, also in Jerusalem, have a plan called Sharap, a Hebrew acronym that stands for private medical service. Established at Hadassah in the 1950s, it allows doctors to do their private work within the hospital, leaving the billing and accounting to the hospital, which then takes about 25 percent of the income.

“The first tenet of Sharap is that it leaves the doctors working full-time in the hospital,” said Dr. Shlomo Mor-Yosef, director-general of Hadassah Medical Center. “They come in the morning, go home at night and have no medical activities outside of the hospital. The heads of departments are around, senior doctors are around for emergencies, for questions from young doctors, for setting an example.”

To Chernichovsky, a modified Sharap program, universally available to all, is one obvious solution to the current health care conundrum. He wants to install Sharap-like systems in every Israeli hospital, keeping doctors at the public hospitals, and patients as well, and diverting the supplementary insurance funds back to the hospitals.

He believes that senior doctors would agree to the system because they would rather work in one place rather than three.

“Sharap is an excellent but not perfect solution,” Beller said. “There is no magic solution, and every solution has a downside.”

Indeed, despite the advantages of the Sharap system, Shaare Zedek and Hadassah physicians were still part of the strike, demanding the same wage increases and work hours as their colleagues in other parts of the country.

For now, it’s clear that the strike raised questions and doctors are still demanding answers. The Health Ministry blames much of the crisis on their own acquiescence to the supplementary health insurance, which led to the growth of private medical care.

For critics like Chernichovsky, it’s a question of leadership, and the solution involves finding a way to change the policy debate and direction of the health care system.

“We’re hitting ideology and Israel’s lack of policymaking,” he said. “There’s practically no health policy. It’s a free-for-all in the health clinics and the system lacks governance. It’s a sad story.”