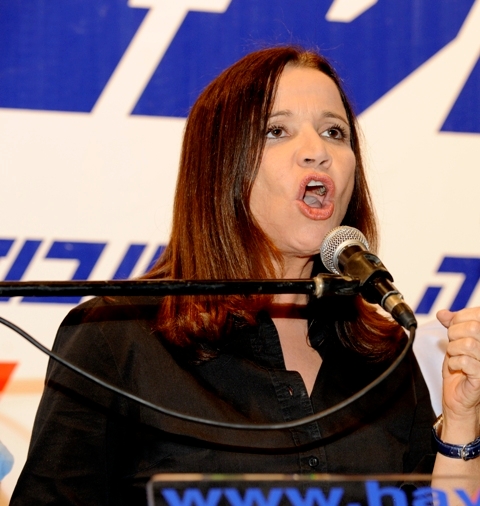 Well over an hour after the guests begin munching on puff pastries, she is greeted like a conquering hero as she wades into the crowd wearing black jeans and sandals. Everyone wants to shake her hand, hug her, kiss her.

Yachimovich ascends the makeshift dais and waits as each of Labor’s Knesset members makes a brief speech offering good wishes for the New Year. The speakers include former Defense Minister Amir Peretz, whom she had edged for the party leadership in primaries last month.

In her remarks, Yachimovich concentrates on socioeconomic issues — her signature focus and, analysts say, the reason she won the Labor primaries after a summer of socioeconomic discontent in Israel.

“What is Netanyahu’s solution to the high cost of living?” she asks the enthusiastic crowd, referring to Prime Minister Benjamin Netanyahu. “To open the Israeli markets, to destroy Israeli industry, to cause thousands of workers to lose their jobs. Not in our party! Not in our party!”

“We are the only ones on the political map who can present a real, deep, social democratic alternative to the capitalistic extremism that Netanyahu has championed,” she says.

Yachimovich, 51, has been in the Knesset for six years. Before that she was a well-known journalist, first on Israel Radio and then on Channel 2. She also wrote two novels.

In contrast to most Israeli political leaders, who emphasize security issues, Yachimovich has focused on social justice causes. She initiated laws requiring employers to provide chairs for their cashiers, favoring Israeli factories and companies over foreign ones, and extending maternity leave to 14 weeks.

Her reputation for social causes worked in her favor following a summer that saw hundreds of thousands of Israelis take to the streets for protests focusing on socioeconomic issues.

Yachimovich’s candidacy succeeded in attracting thousands of young voters to Labor, which had become known in Israel as the “alter kockers party” – Yiddish for “old folks.”

The election last month seems to have breathed new life into the Labor Party, which had been Israel’s dominant party for its first three decades but has faltered greatly over the last 10 years. In the 2009 elections, Labor suffered a crushing defeat, winning just 13 seats in the 120-seat Knesset and falling to No. 4 in size among Israel’s political parties.

Another blow came earlier this year when Defense Minister Ehud Barak split off to form a new party called Atzmaut. He took four Knesset members with him.

Labor activists hope Yachimovich can unite the party and make it a renewed force in Israeli politics.

“Labor must rebuild itself with the goal of leading the social camp and the peace camp,” former Labor Party leader Amram Mitzna told JTA. “These days, when ‘peace’ is a bad word, we have to rebuild hope. Only a combination of peace and social justice can create a new reality.”

Yachimovich is only the second woman to lead Israel’s Labor Party; the first was Prime Minister Golda Meir. The Knesset’s largest party, Kadima, also is led by a woman, Tzipi Livni, while another woman, Zahava Gal-On, is competing to lead the leftist Meretz Party.

“I think she did an excellent job as a parliamentarian,” said Labor Party activist Eli Aloni. “She doesn’t have enough experience in foreign policy, but she’s a smart woman. She’ll learn.”

Media reports frequently describe Yachimovich as having a cold personality, and she has come under particular fire from a former colleague at Channel 2, Nehemia Shtrasler.

Despite being a former journalist, Yachimovich often rebuffs the press. She declined an interview with JTA, and Jerusalem Post political reporter Gil Hoffman said she cut off an interview with him after 90 seconds.

Labor still has a long way to go before it returns to its former glory. Recent surveys found that if elections were held today, Labor would win 22 seats in Israel’s 120-seat Knesset, passing both Kadima and Yisrael Beitenu but still trailing the Likud.