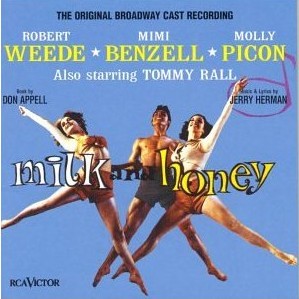 Set in Israel, the plot is built around a budding romance between two Americans visiting Israel: Ruth Stein, part of a touring group of widows, and Phil Arkin, separated from his wife and visiting his married daughter. Complications ensure as Phil and Ruth ponder the implications of love while Phil is not yet divorced. The music and lyrics were written by Jerry Herman (later of "Hello Dolly!" fame). Yiddish theater icon Molly Picon had a supporting role in the show. (The JTA Archive has a glowing report that Picon gave of her 1933 visit to Palestine.)

"Milk and Honey" ran for 543 shows on Broadway. Not counted in that tally was this special engagement for government officials and Jewish lay leaders:

WASHINGTON, Jun. 11 (JTA) – A distinguished black tie gathering of Government officials, diplomats, members of Congress and leaders of the Washington Jewish community last night attended the annual Israel Anniversary Ball. A highlight of the event, given under the patronage of Ambassador and Mrs. Avraham Harman, was the production of an abbreviated performance of the Broadway musical "Milk and Honey," featuring members of the original cast.

Coinciding with Herman’s 80th July 10 birthday — and the golden anniversary of "Milk and Honey" — independent Australian theater company Magnormos staged a triptych tribute that included a number from "Milk and Honey." Here’s a video from the rehearsal: