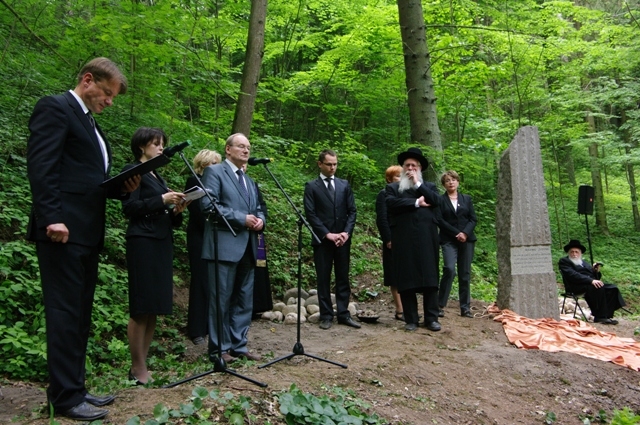 Lithuanian political and religious leaders commemorate the Holocaust this summer at a ceremony held in connection with the country's Year of the Holocaust initiative. (Courtesy Faina Kukliansky)
Advertisement

VILNIUS, Lithuania (JTA) — At first it seemed like a potential breakthrough in Lithuania’s efforts to come to terms with the Holocaust.

In September of last year, Lithuania’s parliament declared 2011 to be the Year of Remembrance for the Victims of the Holocaust in Lithuania. Yet only a week later, the parliament passed another resolution — one that some critics charge has also made 2011 the year of the perpetrators.

The Lithuanian parliament declared 2011 the Year of Commemoration of the Defense of Freedom and the Great Losses. That designation marks the events of 1991, when the Baltic state won its independence from the crumbling Soviet Union, and more controversially, 1941.

It was in 1941 that the Nazis drove the Soviets out of Lithuania. Lithuanian fighters rose up against the year-old Soviet occupation, and Lithuanian nationalists formed a short-lived, Nazi-allied provisional government.

While the anti-Soviet fighters are seen as national heroes by many Lithuanians, they are remembered by Jews as having played a key role in the Nazi effort that wiped out some 90 percent of the country’s Jewish population, with some mounting deadly pogroms against Jews even before the Nazi killing squads arrived.

It is a disconnect that continues to bedevil Lithuanian-Jewish relations.

Efraim Zuroff, director of the Simon Wiesenthal Center’s Jerusalem office, said the two resolutions “are inherently contradictory,” noting that while there is a desire “to honor Lithuanian heroes, among them are people who were involved in the mass murder of Jews.”

Lithuanians have tended to focus on the brutality they faced at the hands of the Soviets rather than their wartime collaboration with the Nazis. In 2008, Lithuanian authorities outraged Jewish groups by investigating anti-Nazi, Soviet-aligned Jewish partisans for alleged complicity in war crimes against Lithuanians.

Milan Chersonskij, the former editor of Jerusalem of Lithuania, the country’s nnow-defunct Jewish newspaper, said he finds the juxtaposition of the two parliamentary resolutions troubling. He says the situation reflects an unwillingness to grapple with Lithuanian culpability in the Holocaust.

“They want the European countries to forget and forgive them the Holocaust of the Jews. They’re doing all that they can,” he said. “The Holocaust, they say, was made not by Lithuanians but by Germans.”

The text of the Holocaust remembrance resolution condemns “the genocide committed against Jews by Nazis and their collaborators in Lithuania during the occupation by Nazi Germany.” It also hails residents of Lithuania who fought against fascism and rescued Jews.

The resolution was sponsored by Emmanuel Zingeris, a Lithuanian parliament member who is Jewish. He said the two initiatives simply honor different slices of the country’s history.

A conversation and healthy dialogue between the two is important, he says.

“In our parliament we have different political groups promoting different projects. We are a democracy, not a Belarus dictatorship,” Zingeris said. “We’ve struggled long enough for the right to live in a democratic society, where there’s no way one can block an initiative to mark and reflect on and evaluate history.”

Faina Kukliansky, a restitution lawyer who serves as the vice president of Lithuania’s approximately 3,500-member Jewish community, says it is important to remember that the country was under Soviet rule for 60 years and is only two decades into grappling with its role in the Holocaust.

“You have to notice not only what is wrong but what is good,” she said. “Only to sit and criticize and not take part in all these events … I don’t think it’s the best position.”

Kukliansky said that funding from the Holocaust remembrance initiative has financed the commemoration of the old Jewish cemetery in Vilnius and facilitated the proper burial of 64 people killed during the Holocaust.

She said the Jewish community has been involved every step of the way, and if she has concerns about the other parliamentary resolution, Kukliansky said she knows better than to bring them up now. The Jewish community has pushed for Jews to be included in events commemorating victims of Soviet oppression, with some success, she said.

“We try to use it as much as we can, to commemorate the events, to educate people, to use it in our favor,” she said. “We’re not openly fighting with the government about this issue.”

The Holocaust commemorative year has brought tangible results, including 25 victim remembrance projects and the passage of a law that will allocate $53 million in compensation to Jewish communities. Zingeris noted that it also has spurred discussion about the construction of an upgraded memorial at Paneriai, near Vilnius, where some 70,000 Jews were murdered during the Holocaust, along with thousands of Poles and others.

But Zuroff said the Holocaust commemoration year is a publicity stunt.

“This is one big cover-up, and it’s part of a well-orchestrated and -financed campaign to fool world Jewry and help polish Lithuania’s image,” he said. “Everything that’s being done is being done for all the wrong reasons, and I haven’t seen any serious effort to honestly face the past.”

For Zingeris, the year represents a chance to increase tolerance in Lithuania and remind the country of its substantial Jewish heritage.

“I just happen to be a second-generation Holocaust survivor and member of the parliament since 1990. If I would not introduce this resolution, perhaps there would be no Year of the Holocaust Remembrance,” he said. “We have to fight revisionist tendencies in our society. We have to honor the victims, the fighters and the rescuers.”

Rabbi Sholem Ber Krinsky, who has served as the Chabad rabbi in Vilnius since 1994, said he has seen a noticeable thaw in Lithuania’s historic unwillingness to examine its past.

“Everything here was frozen for 60 years. There’s new wounds,” he said. “You can’t change people’s psyche in a day and you can’t expect to.”

Regarding the Holocaust initiative, Krinsky said, “They took a big step, so let’s applaud it. Why sift through the sand to find something negative?”