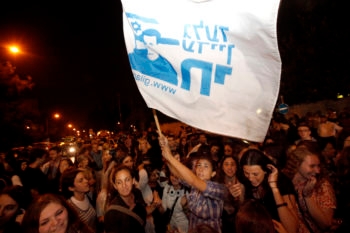 Israelis in Jerusalem celebrate the news that an agreement was reached between Israel and Hamas for the release of captive Israeli soldier Gilad Shalit, Oct. 11, 2011. (Miriam Alster / Flash90) 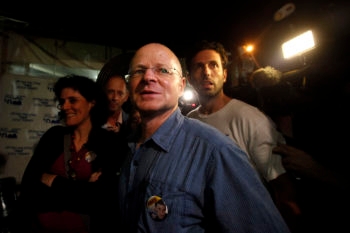 Noam Shalit, the father of captive Israeli soldier Gilad Shalit, reacts at the protest encampment opposite the prime minister’s residence in Jerusalem that a deal has been reached for the release of his son, Oct. 11, 2011. (Miriam Alster / Flash90)

(JTA) — If Israeli soldier Gilad Shalit is freed in the prisoner-exchange deal with Hamas that was approved by Israel’s Cabinet in a 26-3 vote late Tuesday night, it will raise two immediate questions: Which side finally acceded to the other’s demands after years of fruitless negotiations since Shalit was captured in a June 2006 raid along the Israel-Gaza border, and what took so long to get here?

Israeli Prime Minister Benjamin Netanyahu offered some hints about the first issue in a hastily called news conference shortly before going into the special Cabinet meeting. This deal, he suggested, was the best Israel was going to get, so if Israel was ever going to recover Shalit, it had to happen now.

“With everything that is happening in Egypt and the region, I don’t know if the future would have allowed us to get a better deal — or any deal at all for that matter,” Netanyahu said on Israeli television. “The window appeared following fears that collapsing Mideast regimes and the rise of extremist forces would make Gilad Shalit’s return impossible.”

The prime minister added, “If all goes according to plan, Gilad will be returning to Israel in the coming days.”

The deal reportedly was signed by the two sides on Oct. 6 in Cairo following years of negotiations and mediation via the Egyptians. News of the deal was first reported by the satellite TV station Al Arabiya. Its exact contours remain unknown.

Shalit’s release would mark a remarkable end to a five-year saga that has transfixed the Israeli public, frustrated two successive Israeli governments and spanned two wars.

Then a corporal in the Israeli army, Shalit was taken captive at age 19 on June 25, 2006, and almost immediately his family launched an incessant public campaign to free him. The crusade included vigils, marches, meetings, statements by world leaders, celebrity endorsements, bumper stickers, congressional resolutions, songs and a protest encampment opposite the prime minister’s official residence in Jerusalem.

Shalit’s plight struck a chord in the Jewish state and the Jewish world, and Israelis and Jews from all walks of life and political camps took part in activities calling for his release.

It’s not clear whether this public campaign helped usher in the deal announced Tuesday or whether it hindered an agreement from being reached.

Shalit’s family believed that it had to keep up the public pressure on the Israeli government to seal the deal. At the official state Independence Day ceremony last Yom Ha’atzmaut, in May, Shalit’s brother Yoel darted onstage with his girlfriend and a banner reading “Shalit is still alive.” Instead of getting arrested for the stunt on national television broadcast, he got an audience with Israeli opposition leader Tzipi Livni.

But some analysts warned that all the public clamor to free Shalit only made a deal more difficult by increasing the price Hamas demanded for his release. Indeed, for years Israel insisted that the price was too high.

Such criticism followed then-Prime Minister Ehud Olmert’s decision in July 2008 to trade five Lebanese prisoners — including notorious murderer Samir Kuntar — and the bodies of 199 others in exchange for the bodies of Ehud Goldwasser and Eldad Regev, two Israeli soldiers captured in the border attack by Hezbollah that sparked the 2006 Lebanon War.

Goldwasser and Regev were thought to have been killed in the attack or shortly thereafter, but until the coffins with their bodies arrived on Israeli soil, Israeli officials said they could not know with certainty that they were dead.

Shalit’s case has been a little different. In a video released by his captors in October 2009, a frail but otherwise healthy-looking Shalit held a current newspaper and read a message asking Israeli authorities to conclude an agreement for his release. In all his years in captivity, Shalit was allowed no international or Red Cross visitors.

As Israel’s Cabinet discussed the deal into the wee hours Wednesday morning, the heads of the Israel Defense Forces, the Mossad and the Shin Bet internal security service all reportedly expressed support for the deal. When the matter finally came to a vote, there were only three dissenting ministers: Foreign Minister Avigdor Lieberman and National Infrastructure Minister Uzi Landau of Yisrael Beiteinu, and Vice Prime Minister Moshe Ya’alon of Likud.