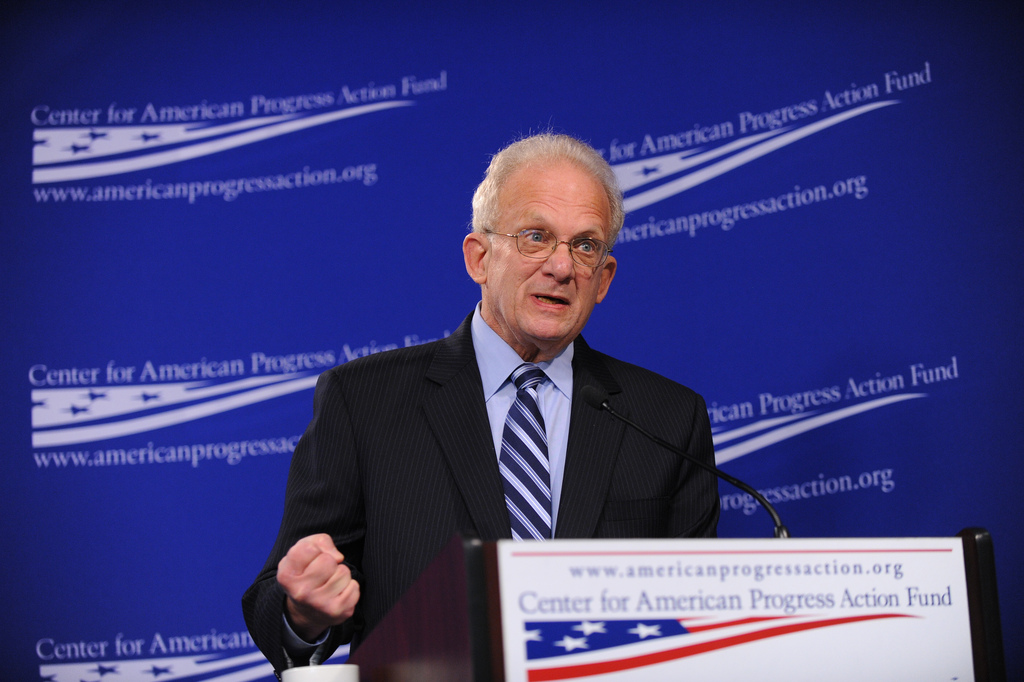 WASHINGTON (JTA) — The California race between Democratic congressional incumbents Howard Berman and Brad Sherman is seen as pitting experience against energy, compromise against confrontation and — painfully for many in the Jewish community — pro-Israel stalwart against pro-Israel stalwart.

“These are two guys who are extraordinary leaders on issues of importance to those who care about Israel,” said a pro-Israel insider in Washington who, like many others in the community, asked not to be identified in order not to offend either congressman.

“Congress will be lessened by one of them not being there,” said the insider, who likened the choice to Solomon’s judgment to split the baby.

Berman, 70, and Sherman, 57, currently represent adjacent districts in Los Angeles’ San Fernando Valley. They have been thrown against one another because of the post-census redrawing of California’s electoral map by a nonpartisan commission.

The 30th includes a substantial Jewish community, making it a natural fit for either lawmaker — but not for both.

Under California’s election laws, the two top vote-getters in the nonpartisan June primary will face off in the general election. In a strongly Democratic district, that means a Berman-Sherman showdown in November is likely.

While they do have some policy differences on issues such as trade policy — Berman last month supported recent trade agreements with South Korea, Panama and Colombia, while Sherman voted against them — both lawmakers are liberal Democrats. The fight between the two congressmen — who never have been close to one another — is shaping up as more about effectiveness and style.

Berman, who has served in the House of Representatives since 1983 and exercised considerable political influence locally through his longstanding alliance with Rep. Henry Waxman (D-Calif.), has racked up support from Hollywood bigwigs and elected officials. Twenty-three of the state’s 34 Democrats in the U.S. House of Representatives have endorsed Berman, as have Gov. Jerry Brown and Los Angeles Mayor Antonio Villaraigosa.

Sherman, a Congress member since 1997, may have fewer high-profile politicians in his camp — his website lists only two members of Congress as endorsers — but he has shown strength on the grass-roots level. Earlier this month Sherman received the endorsement of the Democratic Party of the San Fernando Valley, an umbrella group for 27 local Democratic clubs.

Sherman insists the race will be won locally.

“Talk to your cousin’s old friend in college and if they happen to live in 818, they’re for me,” he said, using the area code for the San Fernando Valley.

Berman, for his part, acknowledges that Sherman is an energetic candidate. But Berman, who has enjoyed decades of large-margin victories and has a reputation as a quieter political operator, says he is ready to take it to the streets.

“There’s no doubt Brad is tireless and getting himself out there,” Berman said in an interview. “I’m building an endorsement list of people within the district, neighborhood councils, homeowner associations, chambers of commerce.”

Berman has his work cut out for him. A poll done for the Sherman campaign and released publicly in August, just after the new district’s lines were finalized, shows Berman scoring just 24 percent to Sherman’s 51 percent in a two-way race. With a third candidate in the race, local Republican businessman Mark Reed, Sherman had 42 percent, Reed 26 percent and Berman 17 percent. The survey of 600 likely voters had a margin of error of 4 percentage points.

Berman, who has been less visible locally than Sherman, says he will be pitching an ability to get things done in Washington.

“My bet is that the voters care at least as much about what we have done in Washington,” he said. “They will have plenty of me before the June election.”

Berman’s record is playing well with the entertainment industry.

“Howard has been a champion of the entertainment industry since he was first elected to Congress in 1983,” DreamWorks founders Steven Spielberg, Jeffrey Katzenberg and David Geffen wrote in a fundraising letter, which included an invitation to a Nov. 10 Beverly Hills gala fundraiser for Berman. “As a lead member of the Judiciary Committee, he plays a key role in shaping the copyright, trademark and patent laws that are so vital to our industry. And as the top Democrat on the Foreign Affairs Committee, he has fought to strengthen aid to Israel, continue U.S. foreign assistance on global HIV/AIDS programs, and improve America’s diplomatic standing in the world.”

That kind of heft has made up for much of the disadvantage faced by Berman as he chose to run on mostly unfamiliar turf, said Raphael Sonenshein, a political science professor at California State University, Fullerton.

“At the start it looked like Sherman would run away with it,” Sonenshein said. “Berman has made a massive move in terms of fundraising and endorsements.”

The latest Federal Election Commission figures, which reflect fundraising through the end of September and thus would not include Berman’s November fundraiser, show the candidates boasting competitive war chests: Sherman had $3.7 million in available cash, while Berman had $2.25 million.

The local Jewish community is paying attention to the race. The L.A. Jewish Journal even launched a special blog devoted to chronicling the contest.

Sherman, however, says that he does not believe pro-Israel donors as a group will take sides, saying their money would be better spent elsewhere because both candidates are strong on the issue.

But pro-Israel Democrats, speaking off the record, suggest more givers may do so than Sherman may acknowledge.

Berman has an edge among Washington pro-Israel insiders. Whereas Sherman wears his advocacy for Israel on his sleeve, Berman is seen as more of a closer. A review of bills sponsored by each congressman shows that Berman’s are likelier to advance further through the system — and eventually become law.

Berman received high marks last year for the passage of an enhanced Iran sanctions act that tightened existing sanctions on Iran’s energy sector and made it easier to sanction Iran’s financial sector. As the senior Democrat on the House Foreign Affairs Committee, Berman is seen by many in the pro-Israel community as better positioned than Sherman — the senior Democrat on its terrorism subcommittee — to advance legislation.

Sherman says give him time.

But Capitol Hill insiders say Berman is better able to align the complex players needed to make such legislation work. As Foreign Affairs chairman in the last Congress, Berman sat on the Iran sanctions legislation until December 2009, liaising with the Obama administration and with foreign governments in order not to pre-empt sensitive negotiations aimed at maximizing multilateral sanctions.

“He was an effective and skilled negotiator at getting the right kind of legislation through,” said Joel Rubin, a former congressional staffer for Democrats who now is director of government affairs at the Ploughshares Fund, which funds projects aimed at advancing peace.

“He understood the tricky balancing act a broad-based sanctions bill from Congress is up against,” Rubin said. “He held out until he got the deal that would support multilateral sanctions, which are proving to be the most effective we’ve seen in decades.”

Berman says his low-key approach has proven itself.

“Those are the things the average voter doesn’t see but the leadership does, which we will communicate,” he said.

Yet Sherman’s aggressive approach is appreciated by some in the pro-Israel community for expanding the parameters of the sanctions debate. He’s now pushing sanctions that would ban the sale of replacement parts for civilian Iranian aircraft.

Sherman acknowledges that such provisions might not become law, but he says his agenda is to pressure the administration into accelerating Iran’s isolation.

“We need sanctions that are a challenge to regime survival and we’re not getting there anytime soon,” he said.

Sherman also emphasizes that he is willing to distance himself from President Obama, who has had a sometimes tense relationship with the pro-Israel community.

“At this early stage he’s distancing himself from Obama without being anti-Obama,” said Bill Boyarsky, a veteran political journalist now writing for L.A. Observed and the L.A. Jewish Journal.

A Jewish staffer for a House Democrat who has not endorsed either candidate said, “The contrast between Howard Berman, a statesman who gets into the issue, and Sherman is sharp. Berman’s a pro-Israel lawmaker with nuance in an age where there’s very little nuance.”

Look for more of that contrast during a long election campaign, Boyarsky said.

“They’re just two different kinds of people,” he said. “Sherman is a scrapper, a nerdy personality, he’s relentless in his campaigning and that’s his strength. Berman has not had this kind of fight. It’s a question of whether he’s willing to scrap.”