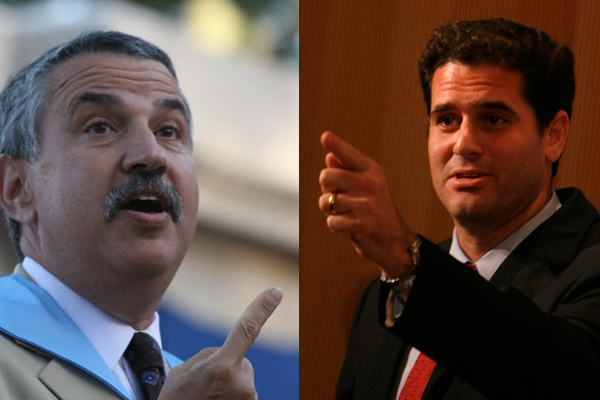 WASHINGTON (JTA) — Israeli officials are stepping up their criticism of The New York Times, slamming columnist Thomas Friedman and arguing that the newspaper is an unfit venue for an Op-Ed from Prime Minister Benjamin Netanyahu.

In a scathing letter first leaked last week to The Jerusalem Post, Ron Dermer, a top aide to Netanyahu, declined an invitation for the prime minister to write an Op-Ed for the Times. By way of explanation, Dermer cited what he alleged was the newspaper’s anti-Israel tilt.

“It would seem as if the surest way to get an Op-Ed published in The New York Times these days, no matter how obscure the writer or the viewpoint, is to attack Israel,” he said.

Dermer’s letter came just days after Friedman, a frequent critic of Israeli settlement policies, asserted that U.S. congressional support for Netanyahu was “bought and paid for by the Israel lobby.”

The recent flaps are casting a light on the degree to which the Israeli government believes it has not been getting a fair shake from what is arguably the most influential newspaper in the world.

In September, in an editorial about the push for U.N. recognition of Palestinian statehood, the Times declared in an editorial that it put the “greater onus on Mr. Netanyahu” for the stalled Israeli-Palestinian talks, claiming he “has used any excuse to thwart peace efforts.” In another editorial a few days later, the newspaper expressed concern that Netanyahu would refuse “to make any compromises with the Palestinians.”

The Times published a response from Israeli Embassy spokesman Lior Weintraub in which the Israeli official noted that during his current tenure, Netanyahu has endorsed the idea of a Palestinian state, pushed for direct Israeli-Palestinian negotiations without pre-conditions, ordered the removal of hundreds of checkpoints and implemented an “unprecedented 10-month moratorium on new West Bank settlement construction.”

Netanyahu “offered to extend the moratorium for an additional three months if the Palestinians would return to the negotiating table. But they did not,” Weintraub continued, adding that in his May speech to Congress the prime minister said that “some settlements will end up beyond Israel’s borders” and pledged that the Jerusalem issue could be resolved “with creativity and with good will.”

Weintraub argued that “obscuring Mr. Netanyahu’s record in pursuing peace only emboldens the Palestinians to avoid direct negotiations with a genuinely willing and eager partner.”

Dermer in his letter suggested that ignoring Netanyahu’s outreach amounted to bad will. Times columnists, Dermer said, “consistently distort the positions of our government and ignore the steps it has taken to advance peace. They cavalierly defame our country by suggesting that marginal phenomena condemned by Prime Minister Netanyahu and virtually every Israeli official somehow reflects government policy or Israeli society as a whole.”

The letter has created a Washington buzz, with some officials with pro-Israel groups scratching their heads at the strategy. Off the record, they say they agree with Dermer’s assessment of the Times, but wonder at the wisdom of turning down an opportunity to appear on one of the most influential Op-Ed pages in the United States.

David Harris, the American Jewish Committee’s executive director, would not comment on the strategy, but said it was clear that the Times had a problem with Israel, noting some of the trends Dermer listed in his letter: The Friedman column and others critical of Israel by Nicholas Kristof; publishing, without adequate redress, an Op-Ed by Palestinian Authority President Mahmoud Abbas that blames Israel for rejecting two states in 1947, when it was the Arabs who rejected the U.N. partition plan; and a column suggesting that Israel’s gay rights advances were merely a function of a propaganda campaign to make Arabs seem backward.

“There has been a clear imbalance on the editorial and Op-Ed pages of The New York Times,” Harris said. “If the Times aspires to a balanced range of views on those pages, it needs to engage in some reflection.”

Friedman in his column listed reasons he believes American Jews like himself are growing uncomfortable with Israel: the closeness of the foreign minister, Avigdor Lieberman, to Russian autocrats and their anti-democratic leanings; the controversy about segregating women from men on buses that serve haredi Orthodox neighborhoods; a slate of laws seeking to limit the influence of human rights groups; and attacks by extremist settlers on Palestinians and the Israeli army.

“I sure hope that Israel’s prime minister, Benjamin Netanyahu, understands that the standing ovation he got in Congress this year was not for his politics,” Friedman wrote, referring to Netanyahu’s address to a joint session last May. “That ovation was bought and paid for by the Israel lobby.”

Friedman on Tuesday told The New York Jewish Week that “in retrospect I probably should have used a more precise term like ‘engineered’ by the Israel lobby — a term that does not suggest grand conspiracy theories that I don’t subscribe to.” Otherwise, Friedman added, he stood by the column.

In response to Friedman’s column, Rothman issued a statement saying that the characterization of the nature of congressional support for Netanyahu reinforced a “dangerous narrative” about supporters of a strong U.S.-Israel relationship.

“I gave Prime Minister Netanyahu a standing ovation not because of any nefarious lobby, but because it is in America’s vital national security interests to support the Jewish State of Israel and it is right for Congress to give a warm welcome to the leader of such a dear and essential ally,” Rothman said. “Mr. Friedman owes us all an apology.”

Dermer is among Netanyahu’s most influential advisers. He is an American immigrant whose late father, Jay Dermer, and brother, David, have both been Democratic mayors of Miami Beach.

Dermer became a Republican in adulthood, and the no-holds-barred political style he acquired from mentors such as Frank Luntz transitioned easily to Israel’s rough politics when he made aliyah in the mid-1990s. Netanyahu, who himself was raised partly in the United States, bonded with Dermer soon after they were introduced.

(JTA Editor in Chief Ami Eden contributed to this report.)