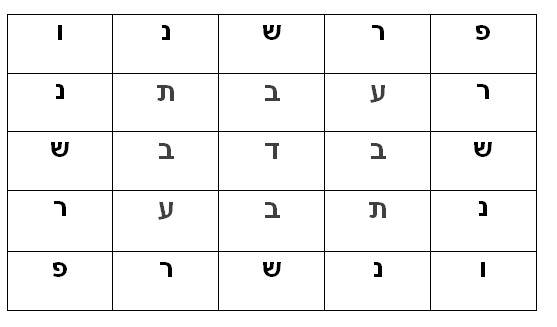 With a five-word palindrome — and a magic square to boot — the Sunday Express of London credited Abraham Ibn Ezra with this feat in 1924. (Sudoku may be a more apt comparison, albeit anachronistic.)

London, Dec. 28 (JTA) – That the cross word puzzle, which now holds the attention of all English-speaking countries, was originally a Jewish invention made as early as the twelfth century by one of the foremost Hebrew writers and poets, Abraham Ibn Ezra, is the opinion voiced today by the "Sunday Express."

The earliest known cross word puzzle is contained in the writings of Ibn Ezra and consists of five words reading the same way up and down, across and back. The text of this puzzle is as follows: Perashnu, Raabathan, Sh’Bedvash, Nitbaar, V’nisraf.

Abraham Ibn Ezra, the leading Hebrew poet during the golden epoch in the history of the Jewish community in Spain, mathematician, astronomer and astrologist, globe trotter who visited twelfth century London, and clever epigramatist, chose the form of the cross word puzzle in his usual habit of veiled writing, to reply to a question submitted to him by a pious friend as to whether honey in fermented state is kosher for passover. When translated, it may mean, "We have interpreted that the leaven in the honey is removed and burned", or it may mean. "We have taken the leaven out of the honey and it is removed and burned."

If you think you’re clever with words — but not magic square clever — try your luck at this Six Words Jewish life memoir competition by Smith Magazine and Reboot. Summarize the Jewish experience in exactly six words and you could be published! Deadline for submissions is Dec. 31.