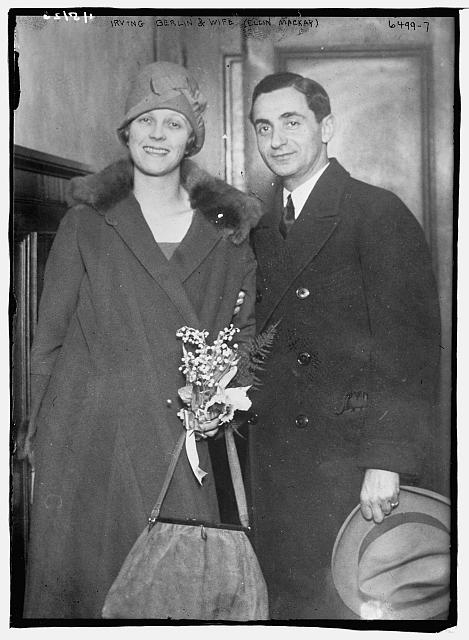 Ed. note: This quaint little story came to my attention yesterday, when a colleague asked an editor whether he could quote a police report in which a white supremicist — who allegedly planned to assassinate ADL director Abraham Foxman last week — said he was leaving home to "kill Jews and [expletive term for Black people]." A search of the n-word in the archive turned up the following …

On Jan. 4, 1926, famous composer Irving Berlin made headlines: he and girlfriend Ellin Mackay — a socialite of Roman-Catholic descent — had eloped.

Like something out of a fairy tale, Mackay’s father, Clarence — a divorcee who loved his daughter fondly — disapproved of her relationship with the composer, a Jewish immigrant fifteen years her senior. A reported anti-Semite, Mackay went to great lengths to make his displeasure clear, and even took his daughter to Europe in an effort to separate the two.

But Berlin — whose first wife tragically passed away after contracting typhoid fever on their Havana honeymoon — was smitten; he kept love’s flame kindled over the radio airwaves, writing and dedicating songs to his new love. When Mackay returned, she and Berlin tied the knot, and asked her father for his blessing after the fact.

The bride’s father, when informed of the wedding, declared: "The marriage comes as a complete surprise to me and was done without my knowledge or approval. Beyond this I have nothing to say."

The marriage lasted for 62 years and bore four children (their only son, Irving, Jr. died in his infancy). Ellin and Irving died about a year apart in 1988 and 1989.

To the extent that this love story comports well with twenty-first century Jewish sensibilities, there’s at least one piece of JTA’s coverage of the marriage that won’t: our use of the N-word in the marriage announcement.

Irving Berlin, the son of Moses Baline, a Cantor, was born in Mogilne, Russia. He came to America in 1893 when he was four years old.

After selling newspapers on the streets of New York, he was a singing waiter at "Nigger Mike’s" on the Bowery. He rapidly rose to fame as America’s greatest composer of popular songs.

"Nigger Mike" was a well known and ill-reputed Russian Jewish immigrant named Mike Saulter, whose nickname was attributed to his "swarthy complexion," according to Stephen Birmingham’s 199 book "The Rest of Us: The rise of America’s Eastern European Jews." The establishment, formally called Pelham Cafe, was actually a seedy dance bar and opium den that attracted mostly underworld types. While The New York Times used the bar’s informal name of the cafe in its coverage at the time, the 1989 obituary of Berlin cited the Pelham Cafe.

Laurence Bergreen, a biographer of Berlin, wrote that only two non-relatives attended Saulter’s funeral; Berlin was one of them, and the only former employee of Saulter’s establishment.

"Treat him as kind as you can," Berlin told a reporter at the funeral. "He was no angel, maybe, but there are a lot of guys on the street today who would have been in jail if it hadn’t been for ‘Nigger Mike.’"