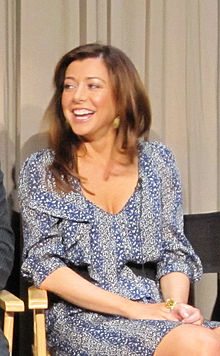 So here’s the problem with the Hollywood Crazy Baby Naming Phenomenon: There is just no end in sight. In fact, people are only getting more elaborate and ridiculous with their name choices, including having their toddler children name the babies in their bellies.

That’s right. Sarah Michelle Gellar might have let her daughter pick out her Golden Globe dress, but Alyson Hannigan is considering leaving the name of her unborn child in the hands of her more recently born child.

Hannigan tweeted the other day that her two year old daughter, Satyana (already off to a dumb-name start), announced to her mother that she has suggestions for her unborn sib. ”’If it’s a girl, Coco. If its a boy Gaguzzi. It sounds like Jacuzzi!’ ” Hannigan enthusiastically tweeted.

Did I mention the child’s last name is Denysof? As in, she thinks it’s alright to forever burden her kid with the name GAGUZZI DENYSOF??? Why do we pay these people real money?! Alyson Hannigan needs to be put in time out and think very hard if she learned ANYTHING from her one time at band camp, especially how much it sucks to be a dork, and how much worse it would be if she was a dork named Gaguzzi Danysof!!!

Sorry for the rant. Crazy moms really bring out my dark side.