In Israel, economic concerns mount, but unclear which party will benefit 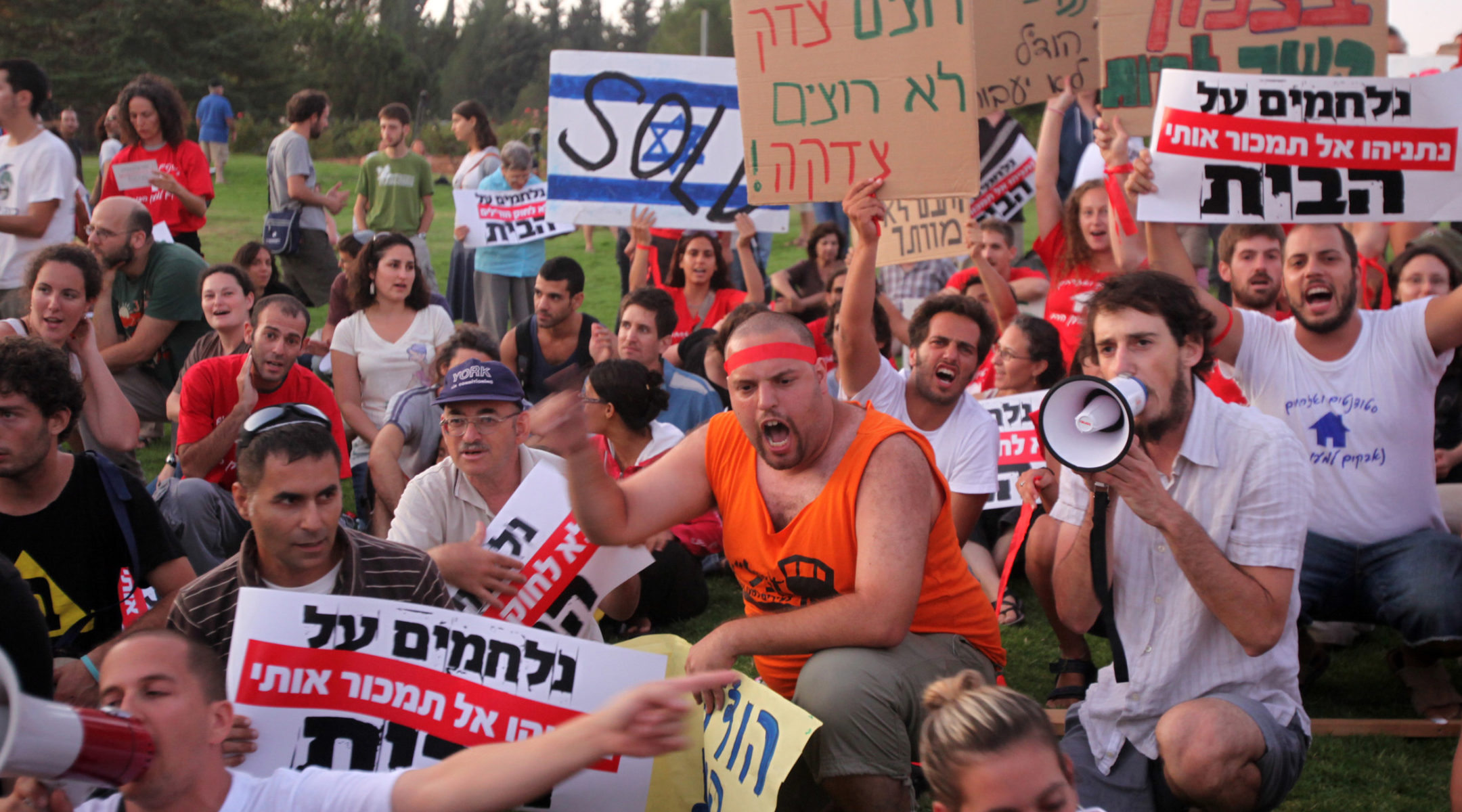 Hundreds of Israelis protesting against the country's soaring cost of living in front of the Knesset in Jerusalem, Aug. 2, 2011. (Yossi Zamir / FLASH90)
Advertisement

JERUSALEM (JTA) – “It’s the economy stupid” was how American political strategist James Carville once summed up the defining issue in U.S. presidential elections.

But in Israel, besieged by enemy nations and locked into an ongoing conflict with the Palestinians, security has traditionally trumped all other political agendas. Until now.

In part because of a sharp decrease in West Bank terrorism and the relative quiet in the Gaza Strip and Lebanon, Israelis have begun to turn their attention from security concerns to economic ones. Some believe this may help Labor and Meretz, parties that have failed to garner wide support for their dovish positions on security matters but may have more appeal when it comes to socioeconomic issues.

“This is the first time since I began writing 23 years ago that there is a chance this election will not be about hawks and doves but about social justice and how the fiscal budget should be split up,” said Daniel Ben-Simon, a former journalist and parliamentarian from the Labor Party.

His party head, Shelly Yachimovich, has been articulating a social democratic economic policy that aspires to promote more social justice and equality and less “piggish capitalism.”

Demonstrations last summer that protested exorbitant housing prices, high costs for basic necessities and growing income inequality managed to mobilize an unprecedented number of Israelis. Called the J14 Movement (after the July 14 date it began), the protest drew more than 400,000 Israelis into the streets — more than the number who attended the 1982 rally organized by Peace Now to protest Israel’s role in the Sabra-Shatilla massacre.

“The J14 movement was and is a crucial moment where the people in this country started to look within and think about themselves as individuals,” said Daphni Leef, who sparked the protest through a Facebook campaign. “They rejected the concept, ‘as long as you are alive don’t complain.’ “

The demonstrations continue to have an impact. It was largely due to an increased sensitivity to social justice that the Histradrut labor federation, Israel’s largest workers’ union with strong ties to the Labor Party, succeeded in launching a strike last week to champion the rights of outsourced, temporary or contracted workers. For years the workers have suffered from low wages, a lack of job security and no pension benefits. Unlike past strikes, there was wide public support for the Histadrut’s battle for contracted workers.

“We enjoyed a lot of backing — on Facebook, on the streets, in the news media,” Histadrut spokeswoman Dafna Cohen said of the five-day work stoppage, which ended Sunday with contract workers receiving a minimum monthly wage and other benefits. “People who had their flights delayed, could not conduct transactions at the bank or suffered from the strike in other ways showed a lot of empathy and solidarity with us. It was heartwarming.”

Still, a military conflagration — such as an Israeli attack on Iran’s nuclear facilities — would be an instant game-changer. A precedent exists in the run-up to the 2009 national elections when Meretz, aware that its dovish positions on security and the Palestinian-Israeli conflict were unpopular, pushed a social-democratic platform.

But then-Prime Minister Ehud Olmert launched Operation Cast Lead in an effort to stop the firing of rockets and mortar shells from Hamas-controlled Gaza. The 22-day military operation pushed security issues to the forefront and rendered Meretz’s socioeconomic platform irrelevant. Meretz ended up with just three Knesset seats, down from five.

Even if socioeconomic issues become a central issue in the upcoming elections, it is not clear that parties such as Labor or Meretz will be its beneficiaries. Lior Chorev, a political strategist from the centrist Kadima Party, predicted that the renewed interest in socioeconomic issues would not necessarily strengthen Labor and Meretz.

“Like Occupy Wall Street, this summer’s protesters were naive in the sense that they did not offer any specific solutions,” Chorev said. “They were just a bunch of people — many of them professionals — who do not want to change the social order, just make life a little better for themselves. Nobody wants to go back to socialism.”

Also, despite all the criticism, the Israeli economy under Prime Minister Benjamin Netanyahu’s government appears remarkably healthy. Unemployment is below 6 percent, compared to slightly above 8 percent in the United States and 10 percent in the European Union. Israel’s GDP grew 4.8 percent in 2011 and the Bank of Israel is predicting another 2.8 percent gain in 2012.

And the Netanyahu government has been responsive to public concern about the economy. Even before the protests, Netanyahu instituted reforms aimed at bringing down the cost of housing. The National Housing Committee Law, which was passed by the Knesset in August, will streamline the process of allocating and zoning land for housing and provide financial aid to families buying or renting homes.

Netanyahu also established a committee to consider ways of combating the concentration of wealth in the hands of a few dozen tycoons. And in the wake of the protests, the Trajtenberg Committee was established and has presented a number of suggestions to help the middle class, the centerpiece of which was free preschool for 3- and 4-year-olds.

The response has been so extensive that some are now concerned that a populist push on social issues might lead to the adoption of imprudent economic policies.

“There is a danger that the very positive awakening of the Israeli consumer and worker to the fact that they are being so exploited by a few oligarchs will be taken advantage of by the social lobby and other leftist groups to institute high taxes on the middle class — the most productive classes of society,” said Daniel Doron, director of the Israel Center for Social and Economic Progress.

But Labor’s Ben-Simon is optimistic.

“The right has adopted the left’s idea of a two-state solution for the Israeli-Palestinian conflict. Now the challenge is the economic question,” he said.

“After moving too far in the direction of neoliberal capitalism, which has ignored the needs of the poor, we will hopefully adopt social democracy — not the socialism of the 1950s and 1960s, but a form of economic thinking that sustains a more just society.”