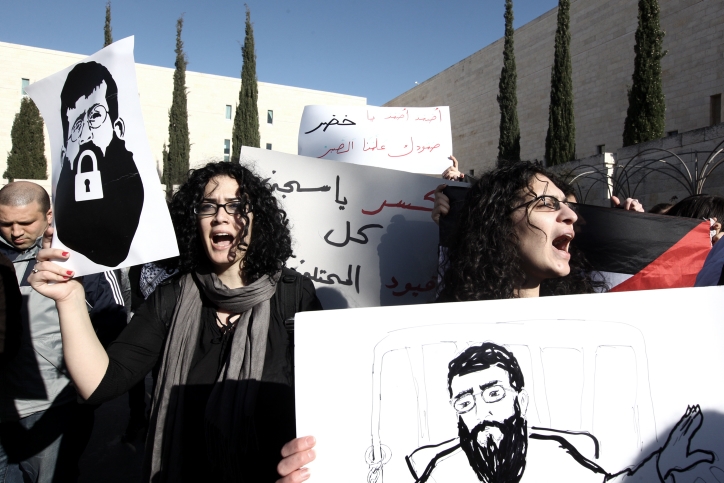 Palestinians demonstrating outside Israel's Supreme Court in Jerusalem in support of Khader Adnan, who declared a hunger strike in Israeli jail more than two months ago, Feb. 21, 2012. Adnan ended his hunger strike that day following an agreement with the State Prosecutor's Office. (Kobi Gideon / Flash90)
Advertisement

JERUSALEM (JTA) — As his weight dropped and his face grew gaunt, Khader Adnan became the latest Palestinian cause celebre.

Israel arrested Adnan, a 33-year-old Palestinian from the West Bank village of Arraba, on Dec. 17 and placed him in administrative detention. The former spokesman for the terrorist group Islamic Jihad was one of thousands of Palestinians over the years who have been arrested and held by Israel for months on end without charges.

What made Adnan’s case different was the hunger strike he launched after his arrest, galvanizing Palestinians and some Israeli human right activists, and catching the attention of international media.

On Tuesday, after 66 days without eating and with his condition reportedly critical, Adnan agreed to end his hunger strike after Israel said it would release him when the order for his administrative detention ends in mid-April — if no new evidence is brought against him.

The deal with Israel’s state prosecutor came less than an hour before the Israeli Supreme Court was to hold a hearing on Adnan’s case and as Israeli security officials warned that Adnan’s death could spark a wave of violent demonstrations throughout the West Bank.

“I always dreamt of marrying someone strong, someone who struggles in defense of his country,” Adnan’s wife, Randa, told Al Jazeera. “When I married him I knew I should expect anything. I am proud of him, whether he is under the ground or above it.”

Adnan’s case ignited a debate in Israel about the issue of administrative detention. Over the past few weeks, thousands of Palestinians in the West Bank and Gaza Strip have held rallies to support Adnan, and several dozen Israelis demonstrated in Tel Aviv last week calling for Adnan’s release and an end to the practice of administrative detention.

Israel often uses administrative detention when the evidence against a defendant is based on information from the security services. In many cases, Israeli officials say a public trial could reveal sensitive security information, such as the identities of Palestinian informers or Israeli security agents who have infiltrated Palestinian organizations.

“It’s always a dilemma,” said Jonathan Livny, a lawyer and former military judge for more than 20 years. “I never felt like I had the tools to make a decision on whether to uphold an administrative detention order. Most often I upheld or shortened it, but rarely canceled it.”

Livny says that cases based solely on Palestinian informants can be suspect, as Palestinians sometimes will provide false information to Israeli security agents if they bear a grudge against another Palestinian.

“I always asked the security agents, “Do you know the informant? How reliable is his information?’ ” Livni said. “But at the end of the day I never really knew.”

Adameer, a Palestinian human rights group, says that some 20,000 Palestinians have been held under administrative detention orders since 2000.

“Administrative detention is a draconian measure,” B’Tselem spokeswoman Sarit Michaeli told JTA. “You’re taking away a person’s liberty without due process, without a trial and without the person being able to fight against these charges.”

Michaeli said that while administrative detention is not illegal, it should be used only in very limited circumstances, not for widespread detention of hundreds of Palestinians.

Some in Israel defend the use of administrative detention as an effective means of preventing terrorist attacks against Israel.

“Administrative detention is a tool used when information pertaining to a case is based on sensitive sources that cannot be released,” said Israel Defense Forces spokesman Eytan Buchman. “Defendants retain the right to appeal the court order, both to the military court and to the High Court of Justice.”

Administrative detention has been used occasionally against Israelis, including in the aftermath of the assassination of Prime Minister Yitzhak Rabin in 1995. But it is most often used against Palestinians.

“We have seen periods when buses were blowing up in Jerusalem. Administrative detention helps secure the well-being of Israelis,” said the Likud Party’s Danny Danon, a member of the Knesset’s Foreign Affairs and Defense Committee.

“Under administrative detention, detainees’ right to a fair trial as guaranteed by Article 14 of the International Covenant on Civil and Political Rights (ICCPR) are consistently violated,” Amnesty wrote in a statement.

This isn’t the first time Adnan has been in prison. Palestinian reports said Adnan had been detained eight times by Israel and once by the Palestinian Authority, in 2010. It’s not clear whether his current detention is related to any direct involvement in terrorist attacks. In his village of Arraba, Adnan reportedly owns a bakery.