Amazing racers, cake for breakfast and an unkosher extradition 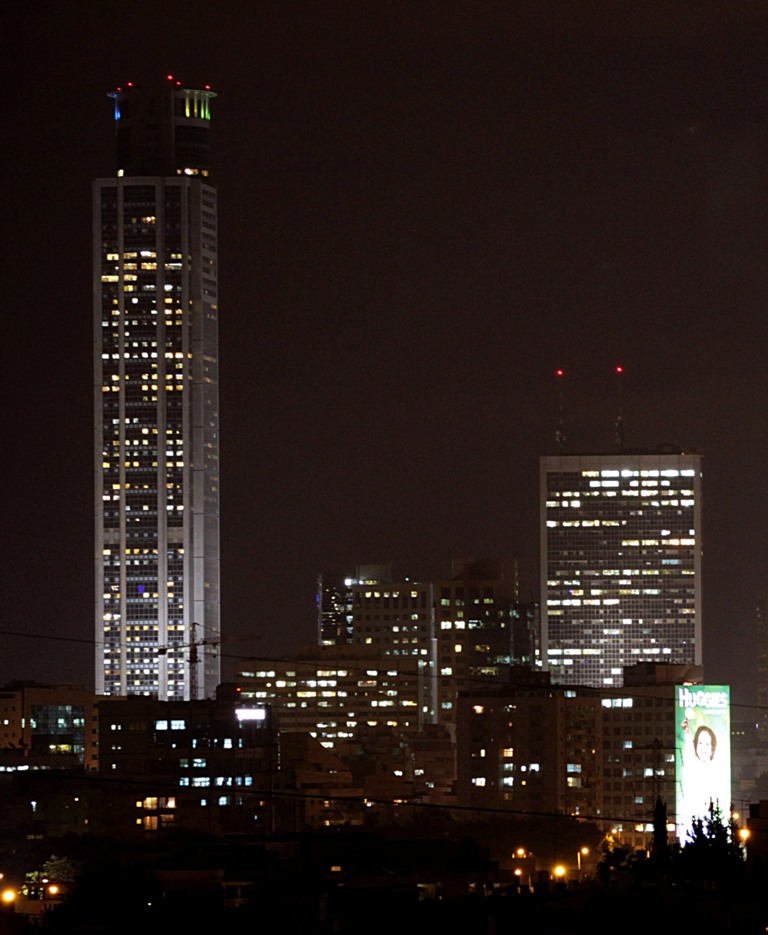 The Moshe Aviv Tower, left, in Ramat Gan's Diamond Exchange district will be replaced later this decade as the tallest skyscraper in Israel by a 70-story high rise in the neighboring city of Givatayim, a Tel Aviv suburb. (Yossi Zamir/Flash 90)
Advertisement

A Modern Orthodox couple’s participation in Israel’s version of the “Amazing Race” has sparked a debate among the movement’s rabbis.

Akiva and Anael Shmuli reached the finals of the second season of the “Amazing Race” after winning the hearts of Israelis from all walks of life because of their close relationship even under stress. The couple finished in third place.

Rabbi Shlomo Aviner, head of the Ateret Yerusalayim yeshiva in Jerusalem, said the couple’s participation went against Jewish values because the show is immodest, Ynet reported. He also said the fact that they had to travel abroad was a violation of Jewish law.

“Here we see a man who invited the television crews on purpose, and they follow him and his every move … that’s the opposite of being modest,” Aviner said, according to Ynet.

But Rabbi Yuval Sherlo, head of the hesder yeshiva in Petach Tikvah and a founder of the rabbinical organization Tzohar, disagreed.

“There is no doubt that in light of the show, secular society in Israel now has a great deal of respect for ‘the Jewish home’ and believes that a relationship within that home is healthy, full of love and trust — all due to the much-discussed couple who even in moments of hardship live in amazing cooperation and admirable coherence,” he told Ynet.

Sherlo said he was not familiar with the reality television show, but that he had heard of the Shmulis. He added that there are many ways to influence Israeli society, including television games.

“It’s good that there are different ways to exhibit the beautiful sides of religious life,” he said, “and everyone needs to act within the fields that they excel at and be happy that their friends are succeeding in other fields.”

Sherlo added that “we need to be careful not to ascribe too much importance to what [the Shmulis] have succeeded in doing.”

Let them eat cake — for breakfast

Good news for dieters: Having sweets for breakfast actually may help you take the weight off.

A new Israeli study shows that enjoying candy or cake for the first meal, when the body’s metabolic rate is faster, can reduce the appetite for sweets during the rest of the day, contributing to weight loss.

Researchers from the Wolfson Medical Center, the Hebrew University’s school of nutrition in Rehovot and the Ariel University Center conducted the study, which looked at the weight loss progress of 193 overweight Israelis, half of whom ate a breakfast including a chocolate bar, cake or a doughnut and the other half who ate a low-carbohydrate breakfast of 300 calories.

After four months on the diet, the average weight loss in the groups was similar, but after another four months the participants on the sweets diet continued to lose weight while the other group gained weight.

An Israeli judge ruled that an American hit-and-run driver cannot be extradited to Florida because he will not receive kosher food.

Lawrence Seth Wayne was found in Israel last year after fleeing Florida more than a decade ago. A Florida court had sentenced Wayne to 19 years in prison for manslaughter while driving drunk.

But Jerusalem District Court Judge Ben-Tzion Greenberger ruled last month that Wayne could not be extradited because Florida does not provide its inmates with kosher food. Greenberger accepted Wayne’s argument that sending him back to Florida would violate Israel’s Extradition Law, which forbids extradition to a foreign country if it could “harm public policy or a crucial interest of the State of Israel,” Haaretz reported.

Greenberger said he would only allow Wayne to be extradited if he is provided with kosher food in a Florida prison or if he can serve out his sentence in a U.S. state that does provide kosher food.

It is unclear whether Wayne is religious and eats only kosher food. He married and had children in Israel, and has been wearing a knitted kipah since being discovered by the FBI in Israel a year ago.

Wayne had entered Israel on a forged passport using a different name.

Another Israeli television show has been picked up for adaptation for American audiences.

CBS has purchased “Shalosh,” or Three, a reality show that follows the search for love of three women. It is the sixth Israeli television show, all by Keshet Broadcasting, to be picked up by a U.S. production company.

The show will be produced by Magical Elves, which also produces “Project Runway” and “Top Chef” on cable networks.

Other shows picked up by American television stations include “Hatufim,” which was adapted by Showtime to become “Homeland,” and “Ramzor,” which Fox broadcast as “Traffic Light.”

The Academy of the Hebrew Language, the supreme authority on the Hebrew language in Israel, is out of sorts with the increasing use of English in Israel’s universities and colleges.

The Jerusalem academy has called on Israel’s education minister, Gideon Sa’ar, to complain about the increasing use, saying that students have the right to use Hebrew in all of their course work, Haaretz reported.

Some colleges and universities require English for certain courses. For example, according to Haaretz, Ben-Gurion University of the Negev’s chemistry department has sent a letter in English to students saying that research papers written in Hebrew will no longer be accepted and that advanced research seminars would be conducted in English because “the language of science is English.”

The academy, which was founded in 1953, has asked Sa’ar to set clear criteria for the use of English in academic work.

Sherian Kihia, 24, made history as the Israeli emergency service’s first ambulance driver, Ynet reported. Kihia said she had to overcome obstacles and criticism to fulfill her dream. Members of her community suggested that she work with the Red Cross instead of MDA, and others frowned on her working long hours alongside men.

Other MDA volunteers do not care that she is Muslim, she said, and “They treat me well and like me here, despite the language difficulties.”

Kihia has plans to become a full-fledged paramedic.

Next thing you know the Sami minority in Norway will be opening ulpan classes to teach their dying language.

Representatives of the minority came to the Hebrew University of Jerusalem recently to learn how Hebrew is taught to students from around the world. The goal is to apply similar teaching methods to revitalize the endangered Sami languages so they can pass them on to future generations.

An estimated 100,000 Sami people live in Lapland, a region in northern Europe stretching across Norway, Finland, Sweden and Russia. Several of the 10 known Sami languages have disappeared, and some have as few as 30 speakers. Not all of the languages are mutually understandable.

Kevin Johansen, an advisor for Sami issues at the University of Nordland in Norway and for the county governor of Nordland, said they were told to turn to Israel because “Israelis are the experts. We wanted to learn from the best, and so that’s why we decided to come here.”

The delegation visited the Hebrew University’s Rothberg International School, where they attended an ulpan beginners-level class, met with teachers and administrators, and learned how the Hebrew University and other institutions have taught Hebrew to vast numbers of immigrants, students and others.

My skyscraper’s taller than yours

Israel’s tallest skyscraper will soon rise out of the Tel Aviv suburb of Givatayim. The 70-story high-rise building was approved recently by the Tel Aviv District Planning and Construction Committee.

The building, which will rise to 771 feet, will house offices, a shopping center, a conference center and a hotel, Haaretz reported.

It is expected to cost approximately $268 million and take about five years to build.

The tower is to be built in the city next to the home of Israel’s tallest building, the 68-story Moshe Aviv Tower, located in Ramat Gan’s Diamond Exchange district.

An American immigrant has vaulted into a spot representing Israel at the London Olympics.

Jillian Schwartz, 33, a pole vaulter, says she is proud to represent Israel in the international games. She had represented the United States at the Athens Olympics in 2004.

“My former colleagues in the states may be a bit disappointed that I’m not representing Team USA, but they’re still happy for me and they all congratulated me,” she told Haaretz.

Schwartz spends most of her time in the U.S., coming back to Israel occasionally for local competitions, according to Haaretz. She reportedly decided to immigrate to Israel and represent the Jewish state due to the strong competition for a place on the U.S. team.

“Just the thought of marching under the Israeli flag at London is very moving,” she told Haaretz. “I have been given a chance to represent the State of Israel and I will do everything it takes to make the most of that.

“Just because I spend most of my time in the states doesn’t mean that I’m not very deeply connected to Israel. As far as I am concerned, I am an Israeli through and through.