Peres on ‘The View,’ Kathy Ireland loves Israel, Pitt to shoot in Israel? 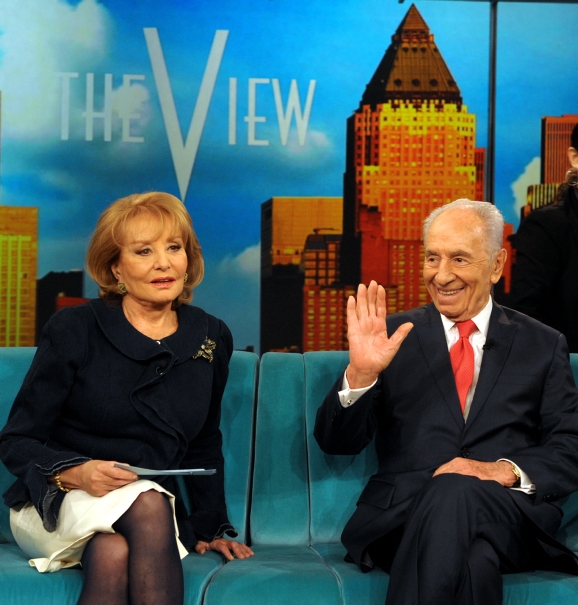 NEW YORK (6NoBacon) — Israeli President Shimon Peres, in New York City last week in the run-up to his appearance at the AIPAC policy conference in Washington, was his usual suave self in an interview with Barbara Walters on “The View.”

When Walters asked him how he felt being surrounded by so many women, he cited the many Israeli women in positions of power and said, “I feel really at home.” He added that In Israel, “The prime minister rules, the president is charming.”

Walters quickly jumped to the burning topic of the moment — Iran. Citing speculation about a possible Israeli attack, Walters asked Peres about the possibility of Israel not notifying the U.S. in advance. Peres, diplomatic as usual, said the U.S. and Israel agree that a nuclear Iran would be dangerous, that Iran shouldn’t have a bomb and that “all options are on the table.”

The 89-year-old Peres won applause at several moments, first when he said the Israel-U.S. relationship was never better on security, and then when he asked the audience if it wanted to be friends with him on Facebook.

Discussing his age, Walters (a fellow octogenarian) told Peres that since they have known each other for some time, she had to give him a kiss. Peres didn’t resist.

So here’s Peres, nearing 90: He’s on Facebook, surrounded by women and kissing Barbara Walters on television. You’ve still got it, Shimon!

Supermodel Kathy Ireland, that is.

Ireland was among the small coterie of celebrities buried among the record-breaking swarm of 13,000 people gathered in Washington this week for AIPAC’s policy conference. On Monday she was given a prime speaking slot at the plenary.

Moving quickly to address the question that surely was on everyone’s mind — Why on earth is a woman best known for gracing magazine covers in a bikini talking about Israel? — Ireland had this to say:

Today I serve as a designer, CEO, a mother, a wife, a Christian and a very proud pro-Israel American. It is humbling to stand before you. And since I’ve arrived, many of you very kindly have asked me why are you here. I’m here to speak loudly to you and to the world with a personal testimony that Israel is not only a Jewish value; it is a cherished American value.

Get ready to hear a lot about this: At least one half of the Hollywood power couple reportedly is going to spend the late summer in Israel. The reason: Brad Pitt is in final negotiations to star in “The Gray Man,” a movie based on a successful novel about a CIA agent who goes rogue that is scheduled to be shot partially in Israel.

“Good Evening with Guy Pines,” Israel’s main celebrity news show, reports that a few Tel Aviv hotels received notice to prepare a quote for about 50 rooms at the end of August. The film is produced by New Regency, a company owned by Israeli producer Arnon Milchan, and directed by James Gray, who has used Israeli actors for his films in the past.

The main question is what will happen to Angelina and the kids. They tend to travel together, with one usually tending to the kids while the other is shooting. Will Angelina stay in L.A. or are they all coming to Israel with daddy?

Pitt might not be the only international celebrity coming to Israel. The latest actor to hop on the “filming in Israel” bandwagon is French actor Jean Dujardin, the recent Academy Award winner for his lead role in the film “The Artist.”

Dujarin, who has earned himself the nickname “the French George Clooney,” is set to appear in Eric Rochant’s “Mobius,” a film about a Jewish Russian oligarch who launders money between a Monte Carlo casino and Israel.

According to the Israeli paper Ma’ariv (via ShalomLife), Dujardin will play a police agent who specializes in financial investigations and falls in love with a young trader who works the oligarch. The filming is set to start in April. However, Ma’ariv reports that insurance companies are hesitant to cover the filming because of the possibility of a war between Israel and Iran.