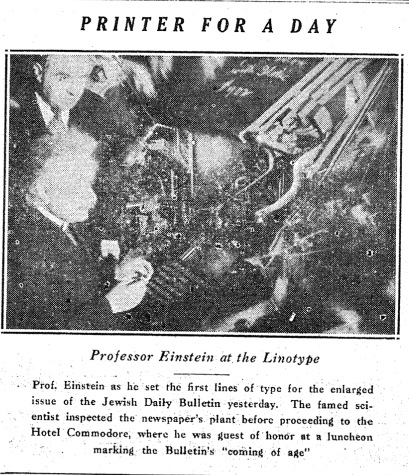 Albert Einstein was born on Mar. 14, 1879. While we haven’t yet decided how to mark the occassion, the Nobel laureate and famed physicist gave many gifts to the Jewish Telegraphic Agency.
[[READMORE]]

In 1933, Einstein and his wife were appointed godparents of Jacob Landau’s son. The newborn’s name: Albert E. Landau.

The following year, JTA’s Jewish Daily Bulletin expanded to a full-size tabloid layout, which Einstein himself set the linotype for on Jan. 15, 1934. That same day, Einstein lent his celebrity to a JTA luncheon at The Commodore.

Einstein’s most valuable enduring gift to JTA was only rediscovered two months ago.

In January of this year, JTA hired Dan Greenman for a cruel and unusual temp job: to organize the mounds of old documents, books and photos in the back room of the JTA office, jokingly referred to as "the morgue."

While engrossed in this task, Dan was kind enough to call me over whenever he found anything that might be of interest to an amateur archive-snooper.

"You won’t believe what I found."

From a filing cabinet in the morgue, Dan had pulled out a folder from 1979, Einstein’s centenary. Inside were several correspondences from the desk of Albert Einstein, mostly addressed to Jacob Landau.

The letters were signed by Einstein.

These documents, along with others in the file, have since been locked away for appraisal — and for management to decide what to do with them. Until they see the light of day again, feel free to peruse a sample of the letters on the JTA Archive Flickr page.

Happy birthday, professor. And thanks for the gifts.