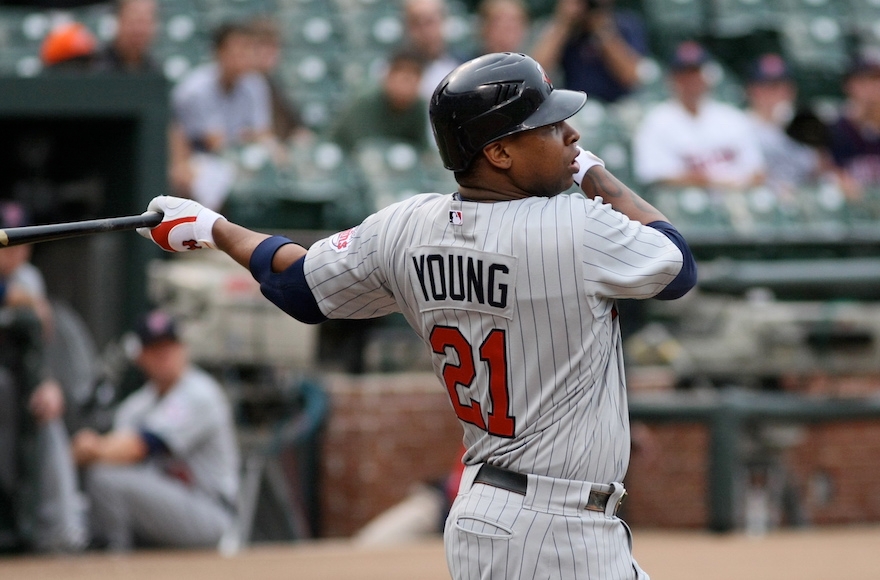 Young was arrested early Friday morning outside the Hilton in Midtown Manhattan, where he was staying before the start of a series with the New York Yankees on Friday night.

According to The Associated Press, a group of tourists staying at the hotel were approached by a panhandler wearing a yarmulke. According to the New York Post, Young yelled anti-Semitic epithets at the group. Young also reportedly shoved one of the men, who sustained minor injuries.

Young faces a misdemeanor aggravated harassment hate crime charge. He was taken to the hospital after the incident, as he was believed to have been intoxicated, a New York Police Department spokesman, Det. Joseph Cavitolo, told the Detroit Free Press.

Cavitolo declined to specify what Young was accused of saying, though the New York Post reported that he said “F–king Jews! F–king Jews!”

He told the newspaper that it was unclear whether the alleged victim, described as a 32-year-old male, was Jewish.

Young endured a 50-game suspension in 2006 for throwing a bat at an umpire. Young is not listed in the starting lineup for Friday night’s game against the Yankees.

The Anti-Defamation League issued a statement saying it was “deeply disturbed” by reports of the baseball player’s outburst.

“Bigoted words are unbecoming for any professional sports player and anti-Semitism certainly has no place in the game, either on or off the field,” the group said.

The statement expressed hope that Young would “take the necessary steps to apologize and ensure that his alleged anti-Semitic words do not reverberate and do lasting harm.”