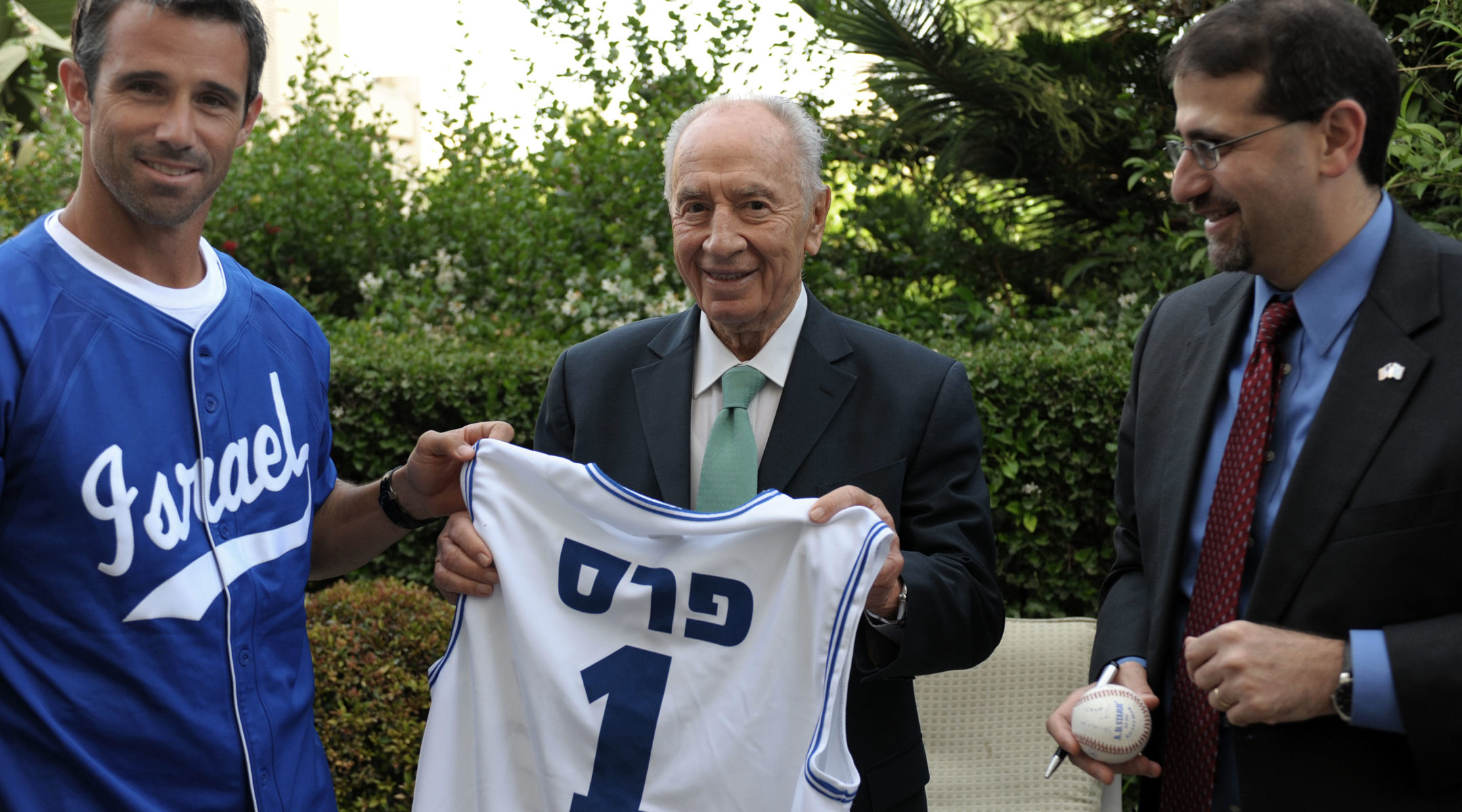 WASHINGTON (JTA) — For decades, the joke in Israel went: How do you know when Shimon Peres is headed for defeat?

When he announces that he is running.

Peres — today Israel’s extremely popular president and on Wednesday a recipient of the Presidential Medal of Freedom — always seemed doomed to defeat at the polls because of everything he was not: a soldier, a sabra, a gladhander, a gladiator in Israel’s rough-and-tumble political arena.

It has taken Peres, a leader in the Zionist enterprise since his second decade, until his ninth decade to receive the accolades for what he was: the fixer who married Israel to the West.

Part of how Peres, 88, has survived from being one both loved and despised by major chunks of Israel’s electorate for so many decades is a matter of how long he has lasted.

“He outlived them all,” said Shlomo Aronson, a retired Hebrew University political science professor. “He is a cat with seven souls.”

Peres arrived in Washington this week to receive his accolade, in a separate ceremony two weeks after 12 others, including folk singer Bob Dylan and former U.S. Secretary of State Madeleine Albright, were similarly honored. The Israeli’s award symbolizes the enterprise that has been his life’s vision — wedding Jewish nationalism to the universal yearning for freedom.

“Through his life and work, he has strengthened the unbreakable bonds between Israel and the United States,” the White House said last month in announcing Peres as a Medal of Freedom winner.

For David Makovsky, a senior analyst at the Washington Institute for Near East Policy who has tracked Peres’ role in the U.S.-Israel relationship since the 1980s, Peres found the key to bonding his nation with the West.

“He was someone who believed that Israel was rooted in its Jewish values and universal values, and that went together,” he said. “He articulated a vision of Israel that many in the West found they could support.”

Peres’ dogged optimism, expressed indefatigably in meetings and appearances that would tire a man half his years, keeps his approval rating stratospheric at home. Haaretz reported in March that he had an 81 percent approval rating — 9 percent more than a year ago and first among political leaders.

Yet as central as Peres was to Israel’s enterprise since his youth, he also seemed apart from it.

When his mentor, Prime Minister David Ben-Gurion, named him director general of the Defense Ministry in 1953, he became the architect of Israel’s defense establishment. He was 29 — and already had more than a decade in the spotlight. Back in 1941, at age 18, Peres was elected secretary general of the kibbutz movement’s youth wing.

In the Defense Ministry, Peres became instrumental in building Israel’s nuclear reactor and in establishing its reported nuclear weapons program. Yet he never accrued the battlefield scars that were seminal to the persona of other pioneer leaders; in the prestate militia, the Haganah, Ben-Gurion made him a procurer of weapons.

In 1957, Peres persuaded Germany to break its arms embargo on Israel; a year earlier he had achieved a similar breakthrough with France. Twelve years after the Holocaust, the decision on ties with Germany was highly controversial.

Meanwhile, Peres was the published Hebrew poet whose unmistakably Polish vowels were fodder for generations of impressionists. He was the dapper, even-spoken man with the styled hair, the tailored suit and the muted, tasteful tie in an Israeli political culture that prided itself in outspoken pols who wore roomy pants and open collars.

His assistants for decades have been youthful, attractive and female. Yet the love of his life, his late wife, Sonya, kept a modest, kosher home.

He lost the 1977 elections — his first as a Labor Party contender to be prime minister — to the Likud’s Menachem Begin, but his low point came four years later. In the 1981 elections, his campaign was marred by protesters who pelted the podium with fruit and shouted obscenities at him.

In the final days of the campaign, Labor tried to make an issue of such attacks, running a TV ad showing Likud backers openly brandishing knives at Peres rallies. It backfired as critics deemed Peres elitist for pointing out that he campaigned under the threat of violence.

In both the 1984 and 1988 elections, Peres was in a deadlock with Likud’s Yitzhak Shamir; both elections resulted in an uncomfortable national unity government. Throughout, Peres fought bitterly with Yitzhak Rabin’s camp in the Labor Party. In 1990, when Peres attempted to talk smaller parties into breaking away from the ruling coalition, Rabin gave it the lasting label of the “stinking trick.”

For observers such as Makovsky, Peres could not adapt his vision to the needs of the day.

“He could be so far ahead; he is futuristic,” Makovsky said.

In 1987, now as Shamir’s foreign minister, Peres attempted to negotiate a peace treaty with Jordan that would have had the Hashemite kingdom take back much of its authority in the West Bank. What made headlines, however, was how Peres had kept Shamir out of the loop and then nixed the secret plan when it came to light.

Today, the Israeli elite — right and left — believe the deal would have shucked much of Israel’s responsibility for the Palestinians, which likely would have meant there would have been no intifadas. Many now see the failure to accept the plan as the government’s greatest mistake in the post-1967 period, according to Makovsky.

Peres, however, would not relinquish his vision.

He attempted to maneuver away from the national unity government in 1990 in part because he was readier than Shamir to embrace President George H.W. Bush’s eagerness to broker a deal with the Palestinians. When Rabin was elected prime minister in 1992, and Peres named his foreign minister, the germination of that effort became the Oslo Accords.

The next year, that blueprint for a still-unfulfilled Israeli-Palestinian peace would win the two Israelis — along with Palestinian leader Yasser Arafat — the Nobel Peace Prize.

Two years later, Peres was devastated by Rabin’s murder by a right-wing Jewish extremist. Assuming the prime ministership, he faltered ahead of the 1996 elections.

Seeking to prove his security credentials, in response to bus bombings in Israel and rocket fire from Lebanon, he ordered a mini-invasion of Lebanon. He hastily pulled out after an errant Israeli shell killed 106 civilians taking refuge in a U.N. compound.

In that race, the Likud’s Benjamin Netanyahu established an easy call and response with his base; Peres would deliver dry encomiums on the new Middle East he imagined, looking up occasionally to scan the crowd in what seemed to be silent pleas for cheers. When Peres went to sleep early the next morning, the polls had declared him a winner; he woke up having lost yet again.

An additional humiliation on the national stage came in 2000. He was 77 and ready to enter his post-political career. He hoped for the presidency, a largely honorary position elected by the parliament. Peres believed he had the necessary support, but the haredi Orthodox Shas party, after delivering assurances to him, switched to supporting the Likud candidate, Moshe Katzav.

Katzav was forced out in 2007 after being charged with rape, which eventually resulted in a conviction and prison sentence. Peres, the forgotten man, emerged yet again. His flaws of image seemed petty against such a scandal.

By then, noted Aronson of the Hebrew University, Peres’ image had yet another reversal.

“He is a kind of hero of the Israeli left, which was not the case for most of his career,” Aronson said. “And those Israelis who do not believe in the peace process see Dimona,” Israel’s nuclear reactor, “as necessary to our survival.”

Finally, 70 years after Shimon Peres arrived on the national leadership stage, the vast majority of Israelis are applauding.