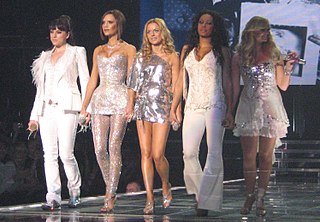 The Spice Girls’ reunion at the London 2012 Olympics closing cermonies might stoke the embers of Jewish communal anxiety from Israel’s 1998 jubilee celebration.

Look out, Spice Girls: Here comes Israel’s jubilee. The largest gathering of Jews ever recorded in Britain — about 20,000 – – converged on the Wembley Conference Center in London this week to attend celebrations to mark Israel’s 50th anniversary.

The crowd was made up of members of the London Jewish community, as well representatives of other, smaller communities who were brought to the festivities by a fleet of about 200 buses…

The performances of the show were sold out — a significant achievement given that the Spice Girls were performing live at the same time, just a few hundred yards away inside Wembley Stadium.

To quote the Spice Girls’ first hit single "Wannabe" — and this may or may not be relevant, I really cannot tell — "If you want my future, forget my past."