The case against Kol Nidre 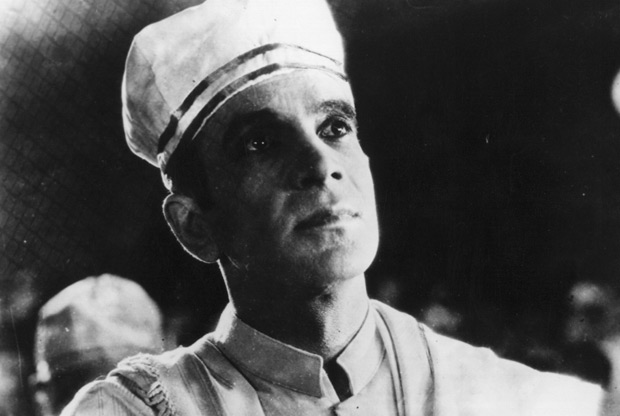 In 1927 — the same year Al Jolson’s "The Jazz Singer" immortalized the Yom Kippur Kol Nidre melody on film — Rabbi Mordecai Kaplan lobbied to replace the words of the Yom Kippur Kol Nidre prayer, sparking debate in his own congregation and in the pages of JTA’s Jewish Daily Bulletin.
[[READMORE]]
The founder of Reconstructionist Judaism believed that the Kol Nidre prayer, an annulment of vows written in Aramaic, was not a suitable prayer for Yom Kippur. After some internal debate, the board of the Society for Advancement of Judaism voted in favor of replacing the Aramaic formula with Psalm 130.

In a statement, Kaplan clarified that he wasn’t against the melody per se, but that the Kol Nidre text didn’t sit well with him:

If we were to make use of music instead of words as a means of prayer, we could not concieve of any music more appropriate for the Yom Kippur mood than the music of Kol Nidre. It strikes the chords both of tragedy and of hope with such inevitable truth that once heard it never ceases to haunt us thereafter. Let us therefore by all means conserve it. But as prayer is also to depend upon the use of words, no text could be more inappropriate and less in keeping with the spirit of Yom Kippur than the text of Kol Nidre. It is a dry, legalistic formula couched in ancient Aramaic to be recited in matter-of-fact fashion in the presence of an improvised Bethdin of three men for the purpose of absolving one from ritualistic vows. All that talk about it having been recited by the secret Jews to absolve them from their acceptance of Christianity is mere rubbish, since it is known to date back to the Gaonic period before the Spanish persecution.

In fact, Kaplan wasn’t the first Jewish leader to reject the Kol Nidre text; the Reform movement advocated removing it from the liturgy at the Rabbinical Conference of Brunswick in 1844. In 1968, Herman Kieval, a longtime professor of liturgy at the Jewish Theological Seminary, noted that the Reform movement’s Union Prayer Book reintroduced the original Kol Nidre text into the liturgy in 1961.

Responding to Kaplan’s case against Kol Nidre in 1927, Barnett R. Beickner, a Reform rabbi of Euclid Avenue Temple in Cleveland, explained why his congregation independently swapped out Psalm 130 in favor of the original Kol  Nidre formula:

The Kol Nidre gives every Jew who hears it, a thrill, and makes him feel that he is at one with all Israel. In these days of Pizur Hanefreshi and Pizur Haguf, we need to emphasize mostly the sense of Jewish religious unity and Jewish solidarity. It is true that the contents of the prayer do not express any "deep religious yearnings," but ought we not to consider as more important, what people read into a prayer rather than what they read out of it?

The Kaddish prayer is also couched in Aramaic, and when translated, does not begin to have the significance that the people read into the prayer. Yet the Kaddish has become one of the most important parts of our ritual service and helps to bring people not only back to religion, but back to the Synagog, because of the associations and meanings which have become associated with the prayer in these many year, Would Dr. Kaplan suggest that we eliminate the Kaddish and substitute a psalm for it?

I fully appreciate Dr. Kaplan’s efforts, but I fear me that he is making, in respect to what he did with the Kol Nidre, the same mistake that the early Reformers made–the mistake of overrationalizing and undrestimating sentiment, not sentimentality. Kol Nidre should have a place in our Yom Kinpur ritual, because of the beautiful sentiment which our people have associated throughout the ages, with the prayer.

Does your synagogue have a unique take on Kol Nidre? Let us know in the comments below, and be sure to read JTA writer — and apparently chazzan — Edmon Rodman as he describes his thoughts on leading this prayer.