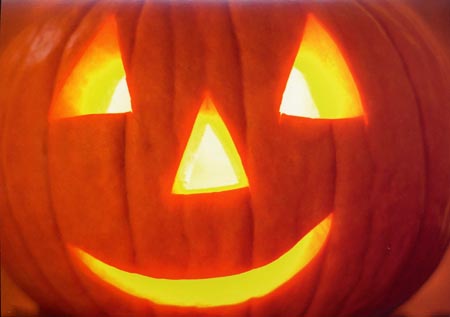 During the 2008 election campaign, Republican candidate John McCain stated during a visit to Israel that “Purim is the Jewish Halloween.”

Flanking him on the tour, Senator Joe Lieberman didn’t just correct him, he also took the fall for the comment:

"I had a brief exchange with one of the mothers whose children was in there in a costume for Purim," Lieberman told MSNBC. "And it’s my fault that I said to Senator McCain that this is the Israeli version of Halloween. It is in the sense because the kids dress up and it’s a very happy holiday and actually it is in the sense that the sweets are very important of both holidays."

The question of how Jews relate — or should relate — to Halloween has proven to be a bit more complex than a matter of costumes.

A correspondent for the Jewish Daily News, an Orthodox Jewish publication in 1926, expressed surprise with being invited to two Halloween parties from Jewish institutions, surmising that people fancied the holiday “a sort of pre-election affair.”

"May I state that this was formerly a pagan holiday,” the correspondent wrote. “The ancient Druid priests used to light fires on the evening of October 31st for the dead spirits. This custom was later utilized by the Christian Church after the conversion of the pagans and thereafter the day was recognized as All Hallows or All Saints’ Day, a day on which mass is said for the martyrs and saints of the Christian Church.”

In 1999, Jane Ulman wrote a lengthy Op-Ed piece expounding on the the history of the holiday. Although she didn’t fancy herself a Halloween advocate, she made the case that the holiday is no more or less complex than other American holidays:

Today Halloween has as much relevance to Samhain and All Hallows Eve as Mother’s Day celebrates incest, revenge and the Christian Church.

At age 4, I remember feeling slightly on edge during a preschool trick-or-treating event. Partly because fewer candies sported a kosher stamp at the time, but also owing to the fact that my mom associated Halloween with being egged while getting off the bus.

Indeed, for some Jews, Halloween is associated with anti-Semitic hooliganism. A Kansas City synagogue was vandalized in 1927, as was a New York City synagogue in 1960. Beyond eggs and broken windows, a firebomb was reported in 1968.

Jews occasionally stood up against these incidents. In Boston, a group of 18 Jewish youths were arrested and released in January 1951 after setting out to avenge a pre-Halloween beating at Hecht House, a Jewish community center. Seven other youths in the case had their cases continued because a revolver was found in the car they traveled in.

As a young adult, my dad watched tempers and testosterone flare as Jewish youth formed civilian patrols to stand watch outside synagogues, waiting for Halloween revelers to shout slurs or throw rocks.

Such was the scene in New York in the 1980s. In 1983, when two young adults briefly faced felony charges after they confronted three teens who entered a Brooklyn synagogue on Halloween. The charges were dismissed by the district attorney, citing lack of proof. In 1985, the late journalist William Saphire wrote about a vigilante group called the Jewish Defense Organization (JDO), whose founder “claimed that 10 JDO members gave a lesson ‘in Jewish justice’ to six teen-age vandals they found desecrating Washington Cemetery, a Jewish cemetery on the borderline between Boro Park and Midwood on October 31, the night of Halloween. Asked what constituted ‘Jewish justice,’ he said ‘beating up and worse.’”

In averting the decree to murder the Jews, the Megillah tells us that 75,000 anti-Semites in the province were massacred, along with several hundred in the city…

Of course, not every Jewish association with Halloween is a negative one. While a tasteless Hitler costume will make news from time to time, and Coca-Cola once got in trouble for packaging that featured a witch donning a Jewish star on her hat, Jews occasionally use trick-or-treating has also served as an opportunity to raise money for charity.