From Madoff to Sandy and on eve of GA, federations retool when crisis hits 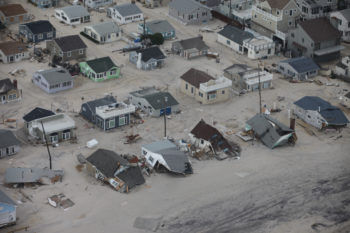 Opening day of the General Assembly of The Jewish Federations of North America in Denver, Nov. 6, 2011. (Eric Stephenson for JFNA)

BALTIMORE (JTA) — The national headquarters of the Jewish Federations of North America could not have been in a worse location when Sandy struck.

Except, maybe, if it were located on the Jersey Shore.

The Jewish Federations’ building in lower Manhattan lost power amid Hurricane Sandy’s winds and the surge of seawater that inundated the neighborhood. For nearly 48 hours last week, the organization’s servers were down, its email, computers and phones offline and inaccessible.

The organization’s annual General Assembly, scheduled for Nov. 11-13 in Baltimore, was less than two weeks away. Worse, the head office of the country’s largest aid and welfare network was out of commission at a time of crisis for New York, the nation’s largest Jewish community.

But then the Jewish Federations came back.

First using Facebook to communicate and later shifting to texts, emails and phones once server access was restored, the organization kicked into action, opening a hurricane relief fund that raised more than $68,000 by week’s end.

Farther uptown, the federation system’s largest member, UJA-Federation of New York, announced a week after the storm that it was making available $10 million in emergency relief aid to its network agencies and synagogues in the New York area.

“In times of crisis — whether after 9/11, Hurricane Katrina, the wars in Israel’s North or this — federations are able to mobilize resources to respond in bold ways,” said John Ruskay, the CEO of UJA-Federation of New York. “While everyone extends themselves in the ways they can, federations are uniquely positioned.”

Jerry Silverman, president and CEO of the Jewish Federations, said, “I am in awe of the incredible response to Hurricane Sandy, and amazed at how quickly Jewish federations rallied, in collaboration with their agencies, to support so many people in distress.”

Four years ago, Jewish federations were facing a much different sort of crisis.

The U.S. economy was in a tailspin. The Bernie Madoff Ponzi scheme had dealt a crippling blow to a host of Jewish foundations, agencies, donors and even universities. The need for aid was rising rapidly, fundraising dollars were in decline and federations were struggling with how to offer additional help while tightening their belts.

So federations began changing the way they did business. Staffs were downsized. Programs were cut. Two federations in New Jersey merged. Fundraising became even more tailored to donors. In some cities, overseas funding was sacrificed in favor of local welfare programs.

Four years on, these changes are still reshaping the federation landscape even as federation fundraising and programming are coming back.

“All of these are important changes and practical changes that the economic collapse didn’t necessarily lead to, but created the momentum that led to them finally being made,” said Louis Feldstein, former chief operating officer of the Jewish Federation of Greater Atlanta and now the CEO at Dynamic Changes Solutions, a management consulting firm.

“The key question is are they major changes or just dancing around the edges. The challenge is that you can’t cut yourself to growth, particularly in the nonprofit sector.”

In Los Angeles, where the recession saw a spike in Jewish poverty, the federation has recalibrated toward serving a more Jewish clientele rather than a nonsectarian one. The federation also has focused more on vocational services.

“We’re doing our work differently and focusing far more on serving Jewish clients because there are so many more to serve,” said Jay Sanderson, president and CEO of the Jewish Federation of Greater Los Angeles.

In New York, the federation established seven regional centers as part of a new program called Connect to Care that partnered with synagogues and other Jewish community institutions to provide everything from vocational counseling to emergency loans.

Like many federations, however, fundraising is still down in New York. While its annual campaign has picked up in the last couple of years, it’s still bringing in less than before the recession.

“We’re on the road back, but we’re not quite back where we were,” Ruskay said.

At the Jewish Federation of Greater Portland in Oregon, fundraising is still down about 25 percent from pre-2008 levels, even though it has grown by 8 percent in each of the last two years. Last year the federation raised about $3.3 million, down from a high mark of $4.2 million before the recession.

“The storm lasted longer than people thought it would,” said Marc Blattner, who became president and CEO of the federation two years ago. “We kept with the mindset that we have to ride this out and stay focused and on message.”

Sanderson says the upcoming General Assembly is a good time to retool and refocus.

The Jewish Federations says it expects some 3,500 people in Baltimore for the GA — assuming that the continuing fallout from Sandy doesn’t keep too many New Yorkers from getting the trains or gasoline they need to get there.

“We did the best we could to maintain momentum and keep everything moving,” said Susan Sherr-Seitz, who is the director of the GA as associate vice president of special projects at the Jewish Federations. “A lot of things are out of our control here. We really are hoping that everyone is doing OK and will be able to come.”

The GA has a special message to convey in this time of challenge, Sherr-Seitz said: “Come together, celebrate together getting through the storm, feel together and feel the power of community.”