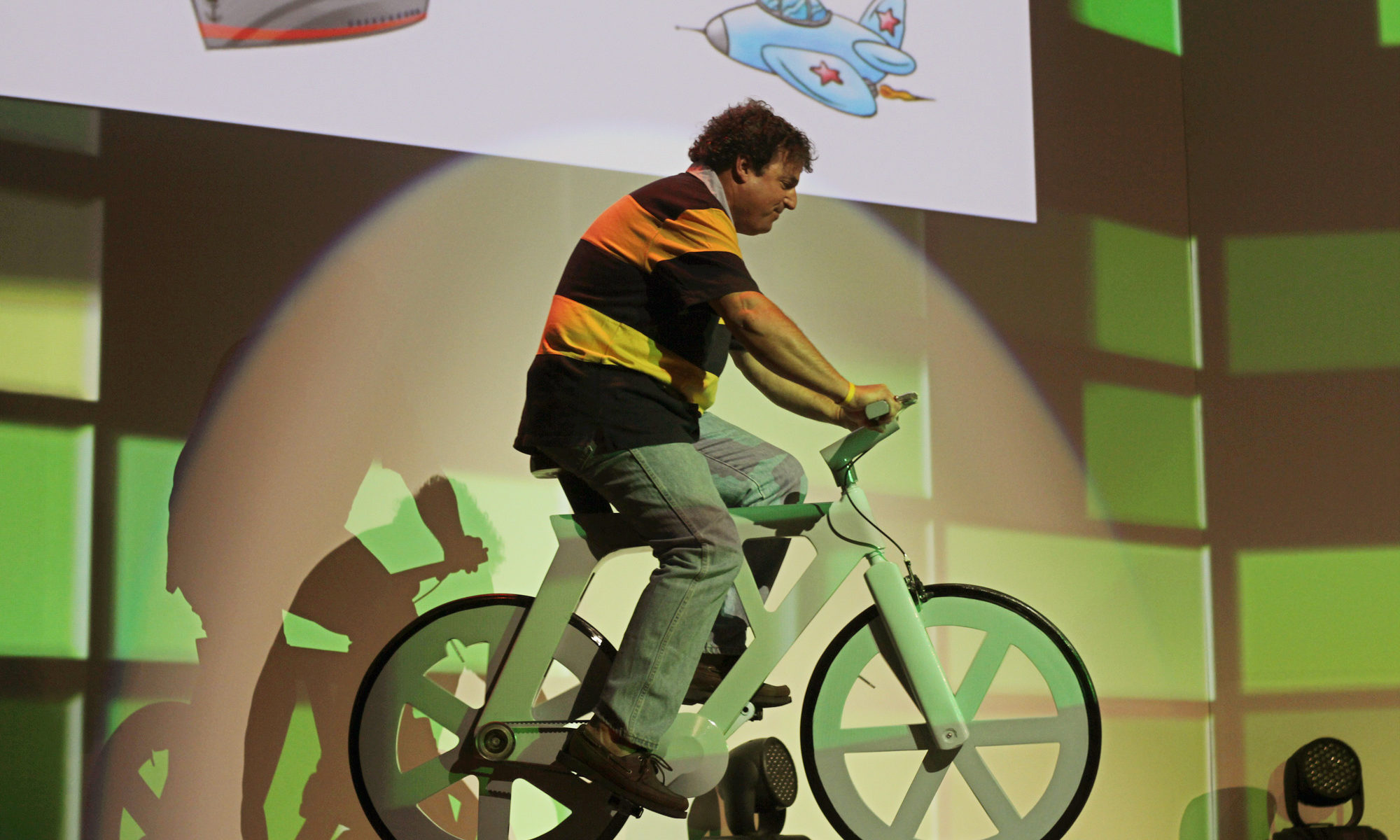 I want to ride my (cardboard) bicycle

Production is set to begin in Israel on a cardboard bicycle.

The $20 bike made entirely from recycled materials is the brainchild of Izhar Gafni of Ahituv, a farming village near Hadera. Gafni, 50, is an inventor, amateur cyclist and expert in designing automated mass-production lines, according to Reuters.

The bike is water- and fire- proof, and its tires are not inflated and thus cannot puncture. It will not have any metal parts, according to the website on Israel technology, NoCamels. The bike also uses a car timing belt instead of a chain.

“When we started a year-and-a-half or two years ago, people laughed at us, but now we are getting at least a dozen emails every day asking where they can buy such a bicycle,” Gafni told Reuters.

A cardboard wheelchair also is set to be manufactured, Israel 21C reported. It will weigh about 20 pounds and be able to carry a person that weighs up to 400 pounds.

Nine of his organs were donated earlier this month after Gilad, 16, of Hod Hasharon, collapsed during running practice and died. Several of the organs went to patients who had an ADI organ donation card, which grants priority on the transplant waiting list.

His heart, lungs, liver and kidneys were transplanted into six patients. His corneas were saved for later transplant.

An Israeli performed the ritual of breaking a glass at his own wedding using his mind.

Asaf Solomon broke a wine glass placed on a small table in front of him and his bride without using any physical means, the Times of Israel reported. He followed up with a more traditional version of the ritual, smashing another wine glass with his foot.

Billions of bottles (and cans)  in the bins

Israelis for years had trashed the idea of recycling, but apparently they’ve gotten the hang of it: More than 5 billion beverage containers have been collected for recycling in Israel in the past 10 years.

Now Israelis are recycling nearly half of large beverage containers, for which there is no deposit, and 77 percent of small bottles and cans, which cost consumers 30 agarot, or about 25 cents. Israel has 18,000 recycling bins for plastic bottles throughout the country.

More than 50 percent of beverage containers are recycled in Israel, compared to 29 percent in the United States. And Israel recycles about half of the collected bottles, with the rest handled abroad, mostly in China.

Recycling bottles and cans is handled in Israel by the Ela Beverage Containers Collection Corporation, which was established by beverage manufacturers after the passage of the Deposit Law, which requires the collection and recycling of all containers smaller than 1.5 liters.

iPhone tempest among the haredim

A haredi Orthodox rabbi who does outreach work was caught on film using an iPhone — a scandal in his closed community whose leaders have banned the use of the device.

Rabbi Amnon Yitzchak of Tel Aviv in response to the photo published on haredi websites and social network admitted that he does, in fact, own and use an iPhone. But Yitzchak said he had received special permission to have one from Rabbi Aharon Leib Shteinman, a prominent Lithuanian haredi leader, in order to perform his outreach work “for the purposes of bringing people back to Judaism.”

Haredi rabbis in recent months have denounced the use of smartphones and iPhones, including holding a ritual iPhone-smashing ceremony. Notices banning smartphone usage have been hung in haredi Orthodox communities denouncing it as a “forbidden device” that has brought a “spiritual holocaust” on Judaism.

Earlier this month, Yitzchak called superstorm Sandy a message from God against the State of Israel’s dependence on the United States.

Popular singers and bands can’t seem to get enough of Israeli fans.

Alanis Morissette will close out her “Guardian Angel” world tour with a show next month in Tel Aviv that sold out last week. A party marking the end of the tour will begin as soon as the concert is over.

It will be the second Israel concert for Morissette; she had performed in the Holy Land in 2000.

Meanwhile, the pop band Depeche Mode will launch its 2013 world tour in May in Tel Aviv’s Hayarkon Park. The band debuted its 2009 world tour in Israel and promised to return.

Rabbi Shlomo Amar said the popular bug-free leafy vegetables that are ubiquitous in Orthodox Israeli households are not kosher and should not be used because they represent a health risk. That’s because many of the vegetable growers use a large amount of toxic pesticides to make them bug-free.

Amar said leafy vegetables such as lettuce and parsley can be checked for bugs “the old fashioned way,” as they have been done for generations.

Prior to the advent of bug-free vegetables, an innovation that began in the hothouses of Gush Katif in the Gaza Strip, Orthodox Jewish homemakers in Israel would spend hours inspecting individual leaves and vegetables for bugs — most of which are considered unkosher. The homemakers are not looking forward to going back to it again, either.

Perhaps if the rabbi was checking his own vegetables he would not have issued the ruling, which is dozens of pages long and took several months to write.

Spokes-man for his ailing wife

An Israeli father of four will take a 160-mile, nonstop bike ride across Israel to support his wife, who is battling stomach cancer.

Yarden Frankl, 45, will ride from the Hermon Mountain in the Golan Heights all the way down to the Dead Sea, and then up the mountain pass to Jerusalem and on to his family’s home in Neve Daniel in the Gush Etzion bloc. The route will take Frankl from Israel’s highest elevation to its lowest and then back up to the country’s second highest spot.

Frankl had to postpone his ride, dubbed “Riding for the Dawn,” for one week due to rainy weather. It originally was scheduled to launch at 2 a.m. Nov. 9.

The funds he raises from his sponsors will go to the oncology department at Jerusalem’s Shaare Zedek Medical Center in appreciation for the treatment that his wife, Stella, has received over the last year. She is continuing to receive aggressive treatment there for late stage stomach cancer.

“I wanted to take on a ride that would reflect both the aspect of longing for the dawn but also rising up from the depths,” Yarden Frankl said. “I can think of nothing that would be more symbolic than riding from the highest point in Israel to the lowest and then back up to the second highest.”

Dangerous predators are not only trying to infiltrate Israel’s borders on foot, now they are hiding in shipments of sunflower seeds.

A shipment of the seeds that arrived in Israel earlier this month was infested with a species of fire ant that can kill with its bite, Ynet reported.

Agriculture Ministry inspectors discovered the stingers during a routine inspection and prevented their aliyah.

The stinging ants, which are dangerous as well to local vegetation and wildlife, have more than 285 species. The fire ant has no natural enemy in the food chain, according to Ynet.

The container of sunflower seeds was sealed and returned to sender.