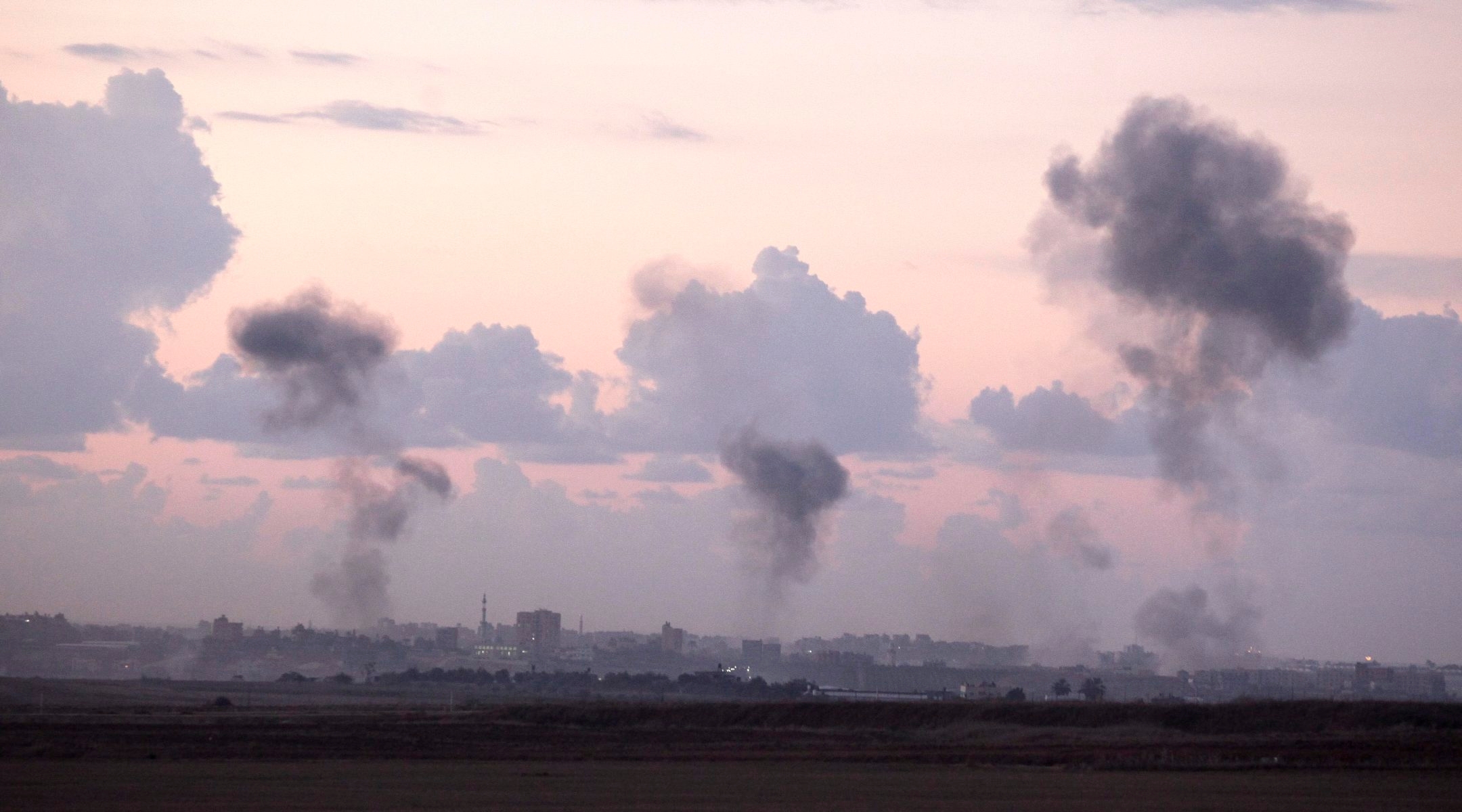 JERUSALEM (JTA) – The Israeli army began moving infantry units to the south and calling up reservists in preparation for a further escalation of hostilities with Hamas after an Israeli airstrike killed Hamas’ military chief in the strip.

Ahmed Jabari and a passenger were killed by an Israeli missile late Wednesday afternoon when the car in which they were driving was hit in what Israeli military officials called a “surgical strike.” The passenger was reported to be Jabari’s son, according to Yediot Achronot, though it was not confirmed by other sources.

Following the strike, the Israel Defense Forces bombed about 20 underground launch sites and ammunition warehouses in the Gaza Strip that had been identified by Israeli military intelligence, the Israel Defense Forces said. Military sources said the sites had been located over several months and many were in civilian areas. Eight Palestinians — militants and civilians — reportedly have been killed in the Israeli strikes and 30 have been wounded.

The IDF said that the assassination and strikes on terrorists’ long-range missile capabilities are the start of Operation Pillar of Defense against Gaza terrorists.

Israeli residents near the border areas were instructed to remain in bomb shelters until further notice. School was canceled for Thursday in southern Israeli communities located up to 25 miles from the Gaza border.

Hamas’ armed wing, the Izz al-Dinn Al-Qassam Brigades, reportedly said in a statement following the attack, “The occupation has opened the gates of hell on itself.”

More than 50 rockets have been fired from Gaza at Israel since the assassination, damaging cars and sending dozens into shock. Three rockets were aimed at Dimona, the site of a nuclear plant. Thirteen of the rockets fired at Beersheva reportedly were intercepted by the Iron Dome anti-missile system.

The strike came after four days of rocket fire from Gaza terrorist groups on southern Israel. More than 150 rockets are reported to have been fired from Gaza, causing damage to homes and factories.

Jabari was directly responsible for carrying out terrorist attacks against Israel for the past several years, the IDF said. He was filmed escorting captured Israeli soldier Gilad Shalit, who was held hostage in Gaza for more than five years, when he was handed over to Egypt last year on his way back to Israel.

“The purpose of this operation was to severely impair the command and control chain of the Hamas leadership, as well as its terrorist infrastructure,” the IDF said in a statement. “This was a surgical operation in cooperation with the Israeli Security Agency that was implemented on the basis of concrete intelligence and using advanced capabilities.”

Defense Minister Ehud Barak told reporters Wednesday night that “Israel is not interested in engaging in war, but Hamas’ provocation in the past days has made it imperative that we act sharply and decisively.” He said the goals of the operation include strengthening the warning to Gaza terrorist groups to halt attacks on Israel, thwarting the rocket attacks and hurting the Hamas terror organization.

Barak declared an “elevated level of preparedness” for the Home Front area, representing a 25-mile radius around Gaza.

“Hamas and the other terror organizations chose to escalate its attacks in recent days,” Prime Minister Benjamin Netanyahu said during the news conference. “Israel has sent Hamas a clear message that it is prepared to defend its citizens.”

Not long after Jabari was killed, Israeli President Shimon Peres called President Obama to update the newly re-elected U.S. leader on the situation.

“Our intention is not to raise the flames, but already for days, day and night, they are shooting rockets at Israel,” Peres told Obama, according to a statement from Peres’ office. “Women cannot fall asleep. I was today there with the children. You know, there are limits. So I want you to know and I wanted to explain our motives.”

In a security message, the U.S. Embassy in Tel Aviv urged Americans in Israel to “exercise caution and take appropriate measures to ensure their safety and security in light of the escalating level of violence in Gaza and southern Israel.”