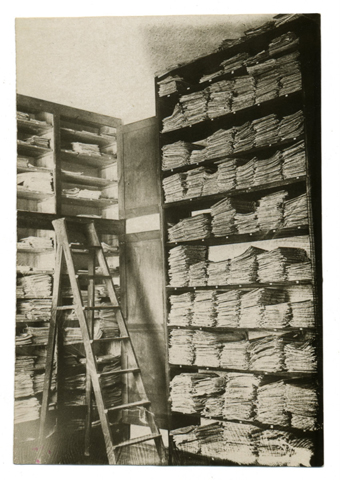 During WWII, a small group of Jewish scholars called “the paper brigade” waged a modern Maccabean revolt in an effort to preserve Yiddish literature.

David Fishman, professor of Jewish history at the Jewish Theological Seminary and author of “The Rise of Modern Yiddish Culture” (University of Pittsburgh Press, 2010) addressed this point on Dec. 11 as part of "The History of the YIVO Library,” an event dedicated to the 65th anniversary of the return of the YIVO Library collections to New York in 1947.

A week after German troops entered Vilna in June 1941, the Nazis began discussing efforts to save Jewish print material from the city. The Reich had a particular interest in finding and preserving Jewish (and Bolshevik) books for a museum in Frankfurt, which they hoped would offer a comprehensive understanding of how the Nazis addressed "the Jewish question." While many YIVO scholars were ultimately murdered during the German occupation of Vilnius, the YIVO headquarters, which contained material gathered by volunteers and scholars since 1926, was flagged as a place containing materials of interest for the planned museum.

The Einsatzstab Reichsleiter Rosenberg (ERR), the German governmental wing that was responsible for collecting and preserving Jewish literature, managed to save a little material from the YIVO Institute, but several books were sent for pulping or used for kindling by Luftwaffe troops who had set up a barracks there in the early stages of the German occupation. In a move that Fishman dubbed a “bureaucratic victory,” the ERR managed to boot the Luftwaffe from the facility in order to begin sifting through whatever material was left.

Realizing that they needed help interpreting the material, the ERR hired a few Jewish scholars from the ghetto (prohibitions against hiring Jews notwithstanding) to sift through the books. These intellectuals were instructed them that they could only preserve 30 percent of the material, the rest of which would be pulped.

Out of this group of 40 intellectuals, 10 from the “paper brigade” were also involved in armed resistance activities. wing, and smuggled weapons into the ghetto. Some of the weapons were hidden in tunnels dug by a Jewish civil engineer, others were surreptitiously hidden in Nazi- or Polish-guarded facilities inside the ghetto where piles of literature stood 1-meter tall.

After the war, the paper brigade successfully recovered much of the material that they had hidden and sent it to the new YIVO headquarters, which had been relocated by YIVO director Max Weinreich in New York.

Fishman concluded his remarks by drawing a parallel between the paper brigade story and the miracle of Chanukah: despite the defilement of most of the books/oil, what little material was left will illuminate Jewish study for generations to come.

IMAGE: Shelves of the YIVO library in Vilna’s periodicals (courtesy of YIVO).