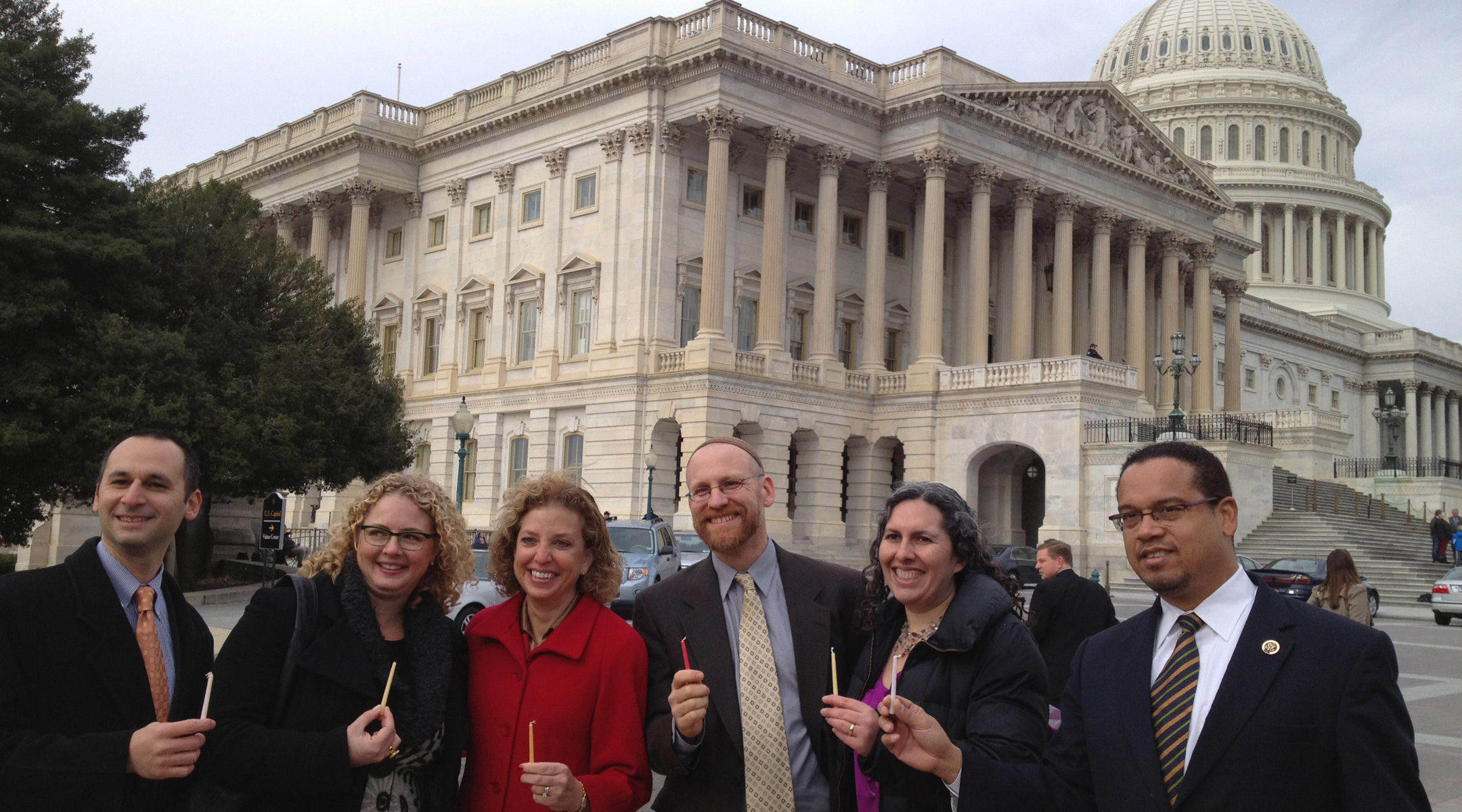 Congressional Democrats join Bend the Arc to lobby on Capitol Hill for a tax hike on those with annual incomes of $250,000 or more, Dec. 20, 2012. (Courtesy Bend the Arc)
Advertisement

WASHINGTON (JTA) — What will be cut? And who will pay?

These are the two facets of the “fiscal cliff” debate in Washington, as President Obama and Republicans in the U.S. House of Representatives wrangle over what mix of cuts and revenue increases should be part of a deficit reduction deal.

Jewish organizations have been vocal during the budget debate, but some key groups are focusing their advocacy mostly on the threat of cuts to programs they hold dear while staying out of the heated fight over taxes.

Several liberal Jewish advocacy groups, including the Reform movement’s public policy arm, have lined up behind Obama in calling for the expiration of Bush-era tax cuts for top earners. But the main Jewish communal umbrella groups are mostly steering clear of the revenue side of the equation, concentrating their energies almost exclusively on stemming spending cuts to programs that aid the elderly and the poor.

“We will continue to make sure any cuts made are not made disproportionately to vulnerable populations who rely on government assistance to stay alive,” said William Daroff, vice president for public policy for the Jewish Federations of North America.

Daroff, however, did not have much to say on the issue of revenue other than to note JFNA’s advocacy for keeping the charitable deduction maximum rate at 35 percent, as opposed to the 28 percent cap favored by the Obama administration. JFNA and many other nonprofits fear that any lessening of the charitable deduction could diminish philanthropic giving.

JFNA’s sister organization, the Jewish Council for Public Affairs, the umbrella body for Jewish public policy groups, also has stayed above the fray on the debate over raising revenue.

“On revenue, we don’t have a policy,” said JCPA spokesman Ben Suarato, with the exception of the group’s support for maintaining the charitable deduction rate.

But Suarato stressed that it doesn’t mean the consensus-driven JCPA opposes tax hikes.

“We understand that there are going to be both pieces,” he said, referring to spending cuts and revenue increases. “We’re going to look at it and make sure all the programs we favor are protected.”

While the Jewish umbrella groups have staked out liberal stances on protecting social services spending, which benefit programs run by the constituent social services agencies of Jewish federations, they are reluctant to take on the issue of taxes for a variety of reasons, observers say. Many of the major donors to the federation system are Republicans and agree with their party’s line on taxes. Also, in an increasingly polarized Washington, advocating for tax increases is seen as creating the impression of partisan alignment with Democrats.

JCPA did manage to find consensus on the Bush-era tax cuts in 2004 when it adopted a resolution opposing a legislative effort to make the cuts permanent. Since then, the JCPA has not weighed in on the issue.

Democrats on Capitol Hill say they would like the Jewish community to pair its support for social services programs with advocacy for revenue growth.

“There’s not enough charitable deduction that can make a difference when bubbe can’t stay in the Hebrew home,” said a top Democratic aide, speaking on condition of anonymity.

Some liberal Jewish groups have weighed in with clear endorsements of Obama’s position on taxes.

The head of the Religious Action Center of Reform Judaism wrote to members of Congress earlier this month urging them to protect “programs that aid the most vulnerable,” echoing the JFNA’s focus. But the letter from Rabbi David Saperstein, the RAC’s director, also expressed concern over “ever widening” economic inequality and called for the expiration of the Bush-era tax cuts on the wealthiest Americans.

“Securing substantial new revenue from those with the greatest ability to contribute will allow us to meet deficit reduction goals, chart a more sustainable fiscal path forward, invest in the job creation measures our economy needs, and protect the programs and services that families depend upon,” Saperstein wrote.

The National Council of Jewish Women on Wednesday urged its members to write to Congress calling for the expiration of tax cuts that benefit the top 2 percent of earners.

A more recently established liberal Jewish group, Bend the Arc, has made the expiration of tax cuts for top earners a central agenda item.

Bend the Arc recently garnered about 300 signatures from Jewish clergy members in a letter to Congress calling for the expiration of tax cuts on annual income above $250,000. It has also held parlors across the country and organized a lobbying day last week.

Doug Mirell, a Bend the Arc board member, said he noted the dissonance between advocating for spending on domestic programs while keeping mum on taxes when he was a Jewish community lay leader lobbying state lawmakers in California.

“If the community is going to seek governmental funding to support its many worthwhile services, it’s incumbent upon those of us who can afford to do so to pay a tax rate commensurate with the services,” he said.

But Fred Zeidman, a major GOP fundraiser who was a past chairman of the U.S. Holocaust Memorial Museum, said that advocating for tax hikes and against spending cuts was not helpful. Jewish groups, he said, must take the hits in government funding and have communal givers dig deeper.

“Everybody is going to have to take a hit, and that includes us,” Zeidman said. “We have to realize we are part of the solution. It means we all have to dig deeper and our institutions will have to be based more on philanthropy than on taxes.”

Rachel Goldberg, B’nai B’rith International’s director on aging policy, said that Jewish groups advocating for continued funding of domestic programs should make the case to their donors that revenue growth is a key element. But she acknowledged that the diversity of opinion among Jewish organizations’ constituents on the issue, which she contrasted with their more uniform support for Israel, made it difficult for them to develop consensus.

“It’s definitely a more challenging thing because Jewish organizations don’t have anti-Zionists generally, but we do have Republicans and Democrats, we do have people who are liberal on domestic issues, people who are pro-tax and anti-tax,” she said. “We need to make the case, you may have voted for Obama, you may like [House Speaker John] Boehner, but this is about do we want to continue providing the safety net we have provided, making sure the best anti-poverty programs ever created continue to work.”