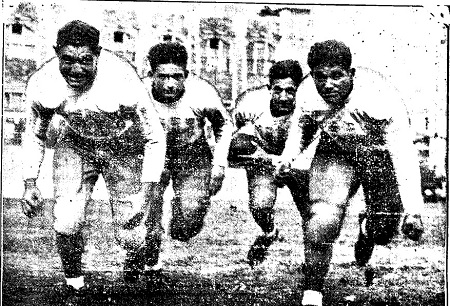 Coach Benny Friedman hurled fresh men into the line of fray as soon as a man gave evidence of weakening. Aaron Greenwald, a substitute halfback, was one of these many reserves. “Greenie,” as he was called by his teammates, was known as an excellent defensive back. His ability to diagnose plays and break up the enemy attack shortly after it got under way was one of the reasons for the success of his team on four occasions during the past season.

In the third quarter of the regular season finale against New York University, Greenwald fell victim to what the CCNY student newspaper The Campus termed a “freak tackle,” where Greenwald was hit simultaneously from the front and the rear. JTA’s Weiner described the blow in vivid detail:

In the third quarter of the game Aaron hurled his body through the air to stem an N.Y.U. tackle play. The whistle blew. But when the referee unpiled the tangle of human bodies Greenwald’s limp form was discovered underneath. Time was taken out and he remained in the game believing his injury not serious. A few plays later he was carried off the field.

His father, who was in the stands watching the game, hurried over to the sidelines where the team doctors were examining the injured player. “I’m o.k., pop,” he said, “don’t worry about me.”

While he may not have known it at the time, Greenwald was in poor shape. Shortly after his team’s 38-13 loss to NYU, the young gridiron athlete collapsed on the subway platform and was rushed to Morissania Hospital in the South Bronx.

While the young player’s recovery had it’s ups and downs, Greenwald had the constant support of his team. Shortly after Greenwald was diagnosed with pneumonia and placed in an oxygen tent, his teammates lined up to donate blood for transfusions. A Dec. 6 New York Times article noted that Coach Benny Friedman — shut out in a Thanksgiving Day return to professional football with the Brooklyn Dodgers that wound up being his last game as a quarterback —  was a “frequent visitor at the hospital since Greenwald’s confinement.”

On Sunday, Dec. 9, 1934, Aaron Greenwald succumbed to pneumonia. According to JTA’s Morris Weiner, “In his last hours [Greenwald] was delirious and was calling out his team’s football signals.”

Greenwald was buried at Mount Moriah Cemetery in Fairview, N.J.

Image: Players on The City College of New York football team, as pictured on the front page of the Sept. 28, 1934 issue of The Campus.