In SodaStream boycott push, Palestinians may be the victims

Scene from the SodaStream Super Bowl commercial that CBS opted not to air. (SodaStream/YouTube)
Advertisement 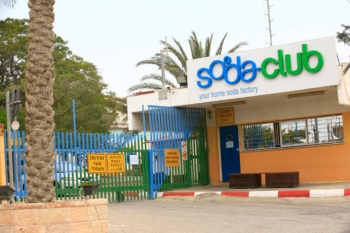 MAALE ADUMIM, West Bank (JTA) – For proponents of the Boycott, Divestment, Sanctions movement, SodaStream would appear to be a straightforward target.

The Israeli company, which sells a popular kitchen gadget that turns tap water into carbonated drinks, has a large factory in a West Bank settlement. When SodaStream announced that it would run an ad during the Super Bowl, the pro-Palestinian boycott campaign against the company reached a fever pitch.

But for hundreds of Palestinians, SodaStream isn’t a target; it’s their employer.

On a recent afternoon, women wearing hijabs hurried to their shifts at the plant located in Ma’ale Adumin, a suburban settlement about 15 minutes west of Jerusalem. Some 500 West Bank Palestinians work at the site, in addition to 400 Arabs from eastern Jerusalem and a mix of 200 Israeli Jews and foreign workers, including refugees from Africa.

The Maale Adumim factory has an on-site mosque and a synagogue, and Jewish and Arab employees share the same dining hall. SodaStream has two other facilities in Israel, in Ashkelon and the Galilee town of Mount Tabor. The Galilee factory employs several hundred Israeli Arabs.

For SodaStream CEO Daniel Birnbaum, treating Arabs and Jews equally is a doctrine, not a convenience.

“We practice equality and full cooperation both on the job and off it,” Birnbaum told the Arab publication Al Monitor in a recent interview.

When he was invited to the Israeli president’s residence recently to receive an award, Birnbaum brought with him a few Palestinian employees and insisted on undergoing the same rigorous security checks to which they were subjected, Birnbaum told Al Monitor. When it came time for Birnbaum’s speech, he broke with protocol and publicly upbraided his host, President Shimon Peres, for the unequal treatment that his Palestinian workers had received, including strip searches down to their underwear.

“We are committed to continue serving as a bridge and to sowing hope,” Birnbaum said in his speech. “Who knows as well as you, Mr. Peres, how important it is to remain optimistic that one day there will be peace?”

SodaStream’s case, some say, is one example of how boycotting an Israeli company doing business in the West Bank can end up hurting the very goals that boycott proponents say they are trying to achieve: Palestinian rights and Israel-Palestinian peace.

“The SodaStream situation is extremely complicated because it’s a clear case of where the owners are making real efforts to engage the Palestinian workers with fair wages and in management positions,” said Kenneth Bob, president of the liberal Zionist group Ameinu, which supports the establishment of a Palestinian state in the West Bank but still opposes boycotts of settlement products. “At the same time, it does on some level strengthen the occupation because it’s a factory over the Green Line,” the boundary between Israel and the West Bank.

Advocates of BDS say supporting SodaStream amounts to supporting Israel’s occupation of the West Bank and that boycotting the company is an effective way to support Palestinian national aspirations.

“In the absence of global and international political pressure for Israel to abide by international law, BDS hopes to use nonviolent pressure to get Israel to stop the occupation,” said Kristin Szremski, a spokeswoman for the Interfaith Boycott Committee, a pro-BDS group. “The boycott of SodaStream felt like it was a great opportunity to raise awareness about settlements and thwart SodaStream’s effort to get into the American market.”

Szremski dismissed the argument that hurting SodaStream could hurt the livelihood of Palestinians, calling it “a way to obfuscate” the issue.

“The point is not just to make SodaStream go out of business,” Szremski told JTA. “Were there no settlements to begin with, Palestinians could be working their own lands. The fact that a worker goes to work every day does not indicate that it is a good thing.”

Another Palestinian worker at SodaStream’s West Bank site, who gave his name as Mmdoh, said politics don’t enter the workplace.

For its part, SodaStream sees growth on the horizon. Its Super Bowl ad cost about $3.7 million, according to Ad Age, and won notice not just for its exploding bottles of brand-name sodas, but because a version of the ad highlighting digs at Pepsi and Coca-Cola was rejected by CBS, which broadcast the game.