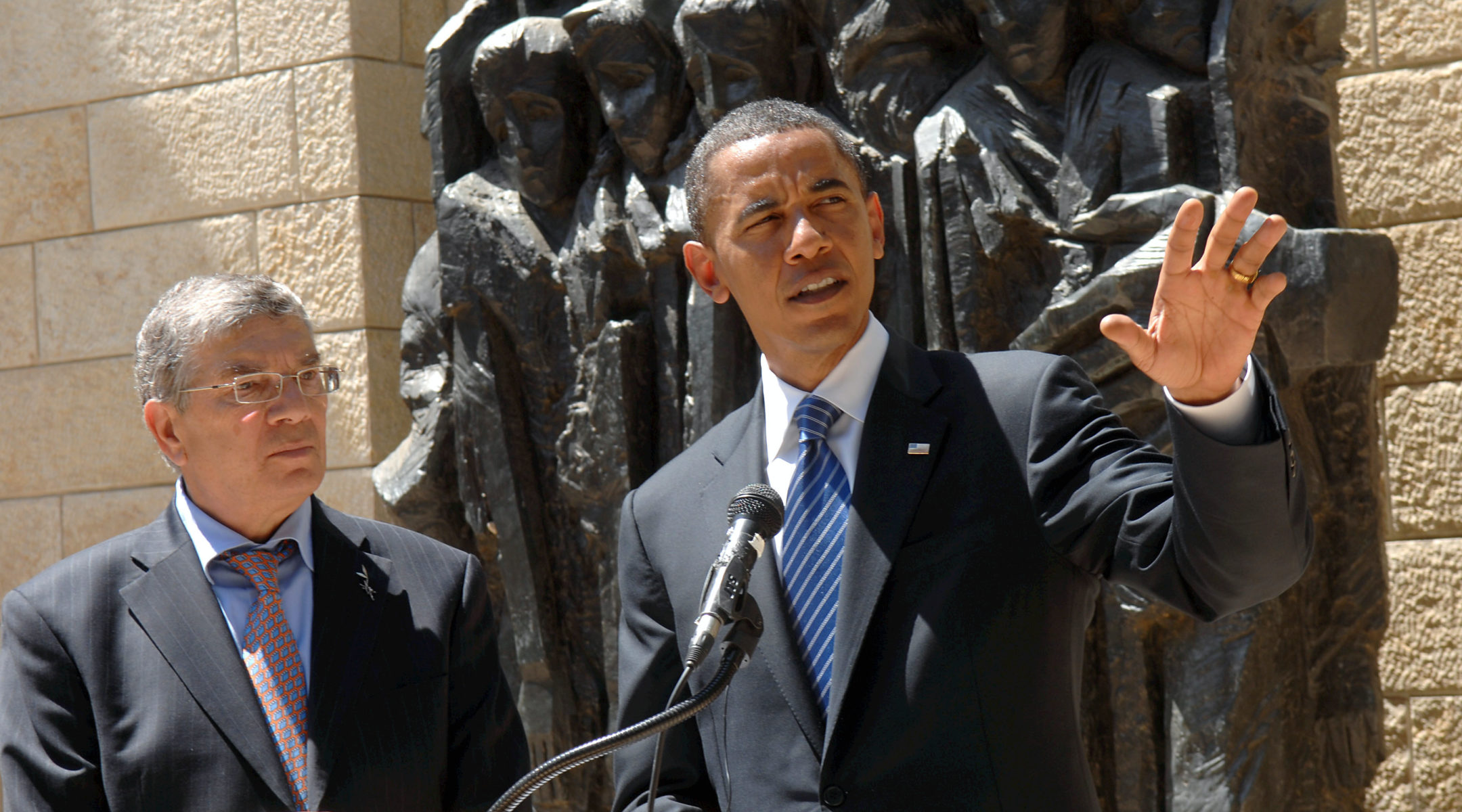 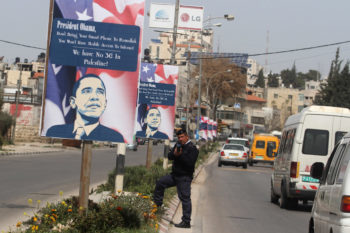 A Palestinian policeman in the West Bank city of Ramallah standing next to a poster with a slogan protesting the upcoming visit of President Obama, March 12, 2013. (Issam Rimawi/FLASH90)

“I’m excited,” said Yaakov, 67, sitting in a Tel Aviv mall. “I want negotiations to get to an agreement on a long-term peace with the Palestinians.”

Yaakov said he trusts Obama, but his friend, Yossi Cohen, is more skeptical.

“I’m not excited,” said Cohen, 64, who charged that the president supports Islamists and “hasn’t done anything” to prevent an Iranian nuclear weapon.

“No one has helped,” Cohen said. “Whoever thinks there will be peace, [it will take] another 200 years.”

Their views reflect two of the president’s overriding concerns as he prepares to embark on a three-day trip to Israel next week.

Obama remains deeply unpopular in Israel, with approval ratings of about 33 percent last year, and Jewish leaders and local analysts are urging him to try to improve his relationship with the Israeli public. But the president also is seen as wanting to promote a renewed effort at Middle East peace, though administration officials, wary of a top-down push for peace, have emphasized that the president is leaving such initiatives up to the parties there.

In a meeting with American Jewish leaders last week, Obama conceded that the short-term outlook for a peace agreement is “bleak,” but that prospects could improve in the coming months. Instead, the president was focused on how best to reach out to Israelis, participants said, asking for input about what he should say and whom he should try to reach.

Obama held a similar meeting with Arab-Americans, soliciting their input about his trip and expressing his “commitment to the Palestinian people” and to partnering with the Palestinian Authority in an effort to establish “a truly independent Palestinian state.”

“It creates an opportunity not only for a new beginning between the president’s second term and the prime minister of Israel, who is beginning a new term — assuming he puts together a government, which I think he will,” Dennis Ross, Obama’s top Iran policy adviser in his first term, said at last week’s American Israel Public Affairs Committee conference, before Netanyahu had established his coalition.

“But I think it also is a chance to create a connection with the Israeli public and to demonstrate unmistakably when the president says that he’s determined to prevent Iran from having nuclear weapons, he isn’t saying that from a distance. It’s not an abstraction. He can go and he can address the Israeli public directly.”

Obama will land at Ben-Gurion Airport near Tel Aviv on March 20. He is scheduled to meet with Israeli Prime Minister Benjamin Netanyahu and President Shimon Peres, as well as Palestinian Authority President Mahmoud Abbas. Peres will present Obama with the Presidential Medal of Distinction, Israel’s highest civilian honor.

His itinerary includes a visit to an Iron Dome missile defense battery, the Israel Museum, the Yad Vashem Holocaust museum and the graves of Theodor Herzl and slain Prime Minister Yitzhak Rabin. After departing Israel on March 22, Obama will travel to Jordan for consultations with King Abdullah.

The night before his departure, he will address thousands of Israeli students at Jerusalem’s convention center. The speech is consistent with Obama’s history of directly addressing the public during his trips abroad, and specifically young people.

“I think this is consistent with his town squares,” said Alan Solow, a top Obama fundraiser and former chairman of the Conference of Presidents of Major American Jewish Organizations. “He recognizes that in the future, the world will be flatter than today and it’s essential that future leaders understand the good intentions of the United States to promote a better and more peaceful world.”

Obama’s engagement with Mideast peacemaking was turbulent in his first term. His relationship with Netanyahu has been rocky at best, and his previous attempt to restart the peace process, in 2010, failed after three weeks.

The president’s low approval rating in Israel is likely only to complicate matters. The 33 percent rating is actually a significant improvement over his first term, when pressure on Israel to freeze settlement expansion in the West Bank helped push his approval numbers below 10 percent.

“Obama needs to reestablish a relationship of trust with the Israeli public,” said Yossi Klein Halevi, a senior fellow at the Shalom Hartman Institute. “Whether Obama likes it or not, Netanyahu is the elected leader of the State of Israel, and whether Netanyahu likes it or not, Obama is the elected leader of the U.S. It’s time for the two leaders to accept the inevitable and learn to work together.”

U.S. administration officials have aimed to lower expectations for any concrete outcome to the Obama trip, denying recent reports in the Israeli media that the president is preparing a major peace initiative and emphasizing that he intends to do a lot of listening. Analysts say in order to make progress on the peace front or the Iranian nuclear threat, another issue much on the minds of Israelis, Obama needs to be more candid about past failures.

“For a game-changing speech, you need to speak realistically,” said Gil Troy, a McGill University history professor who is also a Hartman fellow. “You can’t pretend it’s the start of the Oslo peace process. You need to move forward based on the failures. I think Israelis are primed for it.”

Klein Halevi said a similar honesty should be evident in Obama’s treatment of the Iran issue. Israelis are doubtful of the president’s repeated assertion that all options are on the table in addressing the nuclear threat, he said, and urged the president to speak directly to the Iranian leadership in his convention center address.

“When Obama speaks on Iran, he shouldn’t be speaking only to the Israeli public,” Klein Halevi said. “He should be directly addressing the leadership of Iran from Jerusalem.”

Despite the caution coming from the White House, Israelis are anything but unified in their skepticism of a new peace push. On Facebook, 23,000 people have “liked” a push to have Obama address the masses at Rabin Square, the emotionally charged plaza where the prime minister who signed the Oslo Accords was assassinated in 1995.

“We want to send the message that there’s a public desire to turn the page and strive for peace,” said Amit Youlzari, 31, the lead organizer.

With Obama set to speak in Jerusalem, Youlzari has helped arrange for the speech to be shown on large projection screens in the square.

“We want to tell the U.S. that we support Obama and the messages we hear from him,” Youlzari said. “And we want to send the world a picture of a full plaza of people who want peace.”