Day 1: Obama and Netanyahu are all smiles 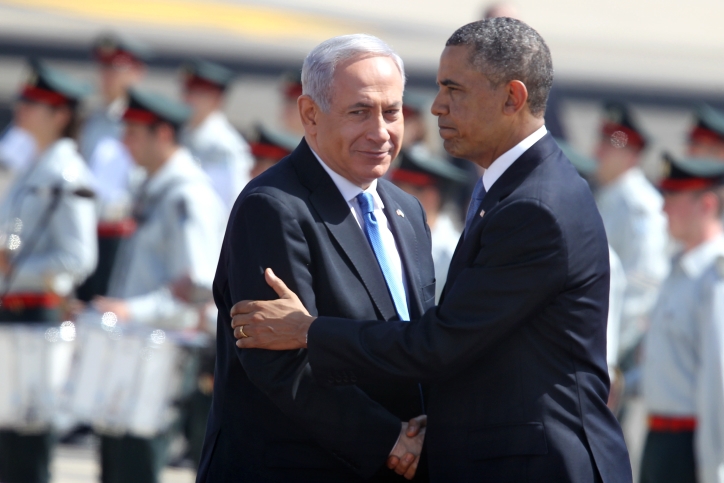 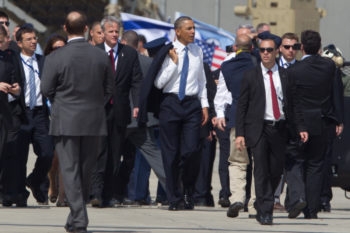 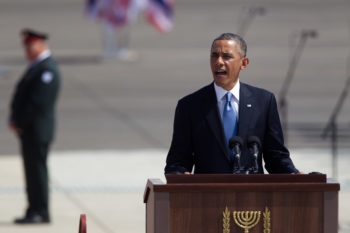 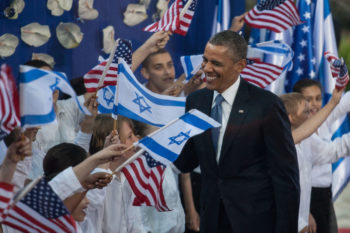 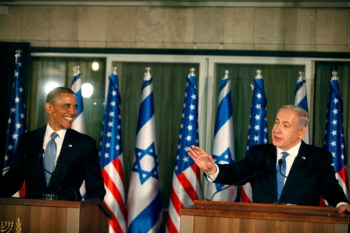 The leaders of two closely allied countries, they’ve have had a relationship described more often as tense than anything else.

But on the first day of Obama’s first presidential trip to Israel, the president and prime minister were all smiles, handshakes and hugs. Netanyahu couldn’t stop thanking Obama for his support on a range of issues. Obama, for his part, attempted a few sentences in Hebrew, quoted the Talmud, and complimented Netanyahu’s wife and children.

Obama has been to Israel twice before, most recently as a presidential candidate in 2008. Rather than signaling the launch of a new push for Israeli-Palestinian negotiations, this trip appeared to be an effort by Obama to win over the hearts and minds of Israelis.

“I see this visit as an opportunity to reaffirm the unbreakable bonds between our nations, to restate America’s unwavering commitment to Israel’s security,” Obama said upon his arrival. “It makes us both stronger. It makes us both more prosperous. And it makes the world a better place.”

Wednesday’s agreeability between Obama and Netanyahu also extended to policy. The two leaders downplayed any differences on security issues and instead stressed broad U.S.-Israeli consensus on Iran’s nuclear program, the Syrian civil war and even Israeli-Palestinian negotiations.

Last year, Netanyahu issued a thinly veiled rebuke of Obama, saying at a news conference that nations that don’t issue red lines on Iran’s nuclear program “don’t have a moral right to place a red light before Israel.” On Wednesday, though, practically the only mention of a red line was a joke the two men made about the red carpet laid out for Obama during his welcome ceremony.

In a statement following a meeting with the president, Netanyahu praised Obama for his actions on Iran.

“You have made it clear that you are determined to prevent Iran from developing nuclear weapons,” Netanyahu said. “I appreciate your forthright position on this point. I appreciate that you have acted through diplomacy and strong sanctions.”

And while Obama said multiple times of Iran that “we prefer to resolve this diplomatically,” he added, “Each country has to make its own decision when it comes to the awesome decision to engage in any military action. I don’t expect that the prime minister will make a decision about his country’s security and defer that to any other country.”

“I did not want to come here and make some big announcement that might not match up with what the realities and possibilities on the ground are,” Obama said. “I want to listen before I talk. It is a hard slog to work through all of these issues.”

Netanyahu responded by affirming Israel’s commitment to a two-state solution, even though some prominent members of his new coalition oppose any sort of Palestinian state. He said he hopes to resume negotiations soon.

“Let me be clear: Israel remains fully committed to peace and the solution of two states for two peoples,” Netanyahu said. “We extend our hand in friendship and peace to the Palestinian people.”

In his welcome speech, Obama may have aimed to smooth over some hard feelings lingering from his June 2009 speech in Cairo, when the new president implied that Israel’s legitimacy stemmed from the Holocaust rather than the millennia of Jewish history in the land of Israel.

Obama opened his speech upon arriving at the airport near Tel Aviv with a little Hebrew, quipping, “It’s good to be back in Israel” in an accent that wasn’t half bad. Obama then paid homage to “the historic homeland of the Jewish people.”

“More than 3,000 years ago, the Jewish people lived here, tended the land here, prayed to God here,” Obama said. “And after centuries of exile and persecution, unparalleled in the history of man, the founding of the Jewish State of Israel was a rebirth, a redemption unlike any in history.”

On Wednesday, Obama and Netanyahu emphasized the importance of Palestinian-Israeli peace. Obama also illustrated Peres’ decades-long work toward peace with a Talmudic story about a man who plants a tree even though he knows he won’t live to see its fruit.

“As my forefathers planted for me, so will I plant for my children,” said Obama, quoting the famous passage.

A military band played Israeli standards for the president as he disembarked from Air Force One, and a children’s choir serenaded him after his meeting with Peres.

Thursday, however, may not be as charmed for Obama. He’ll visit the West Bank and meet with Palestinian Authority President Mahmoud Abbas and Prime Minister Salam Fayyad.

He’ll also speak to thousands of Israelis in Jerusalem — a speech in which he said he would expand on his vision for the peace process.

For now, though, the theme of the trip looks to be reconciliation. Asked about the Israeli public’s relative coolness toward Obama – a poll conducted this month by the Israel Democracy Institute showed that 54 percent of 600 Jewish Israelis surveyed do not trust Obama to consider and safeguard Israel’s interests — Netanyahu said, “People should get to know President Obama the way I’ve gotten to know him.”