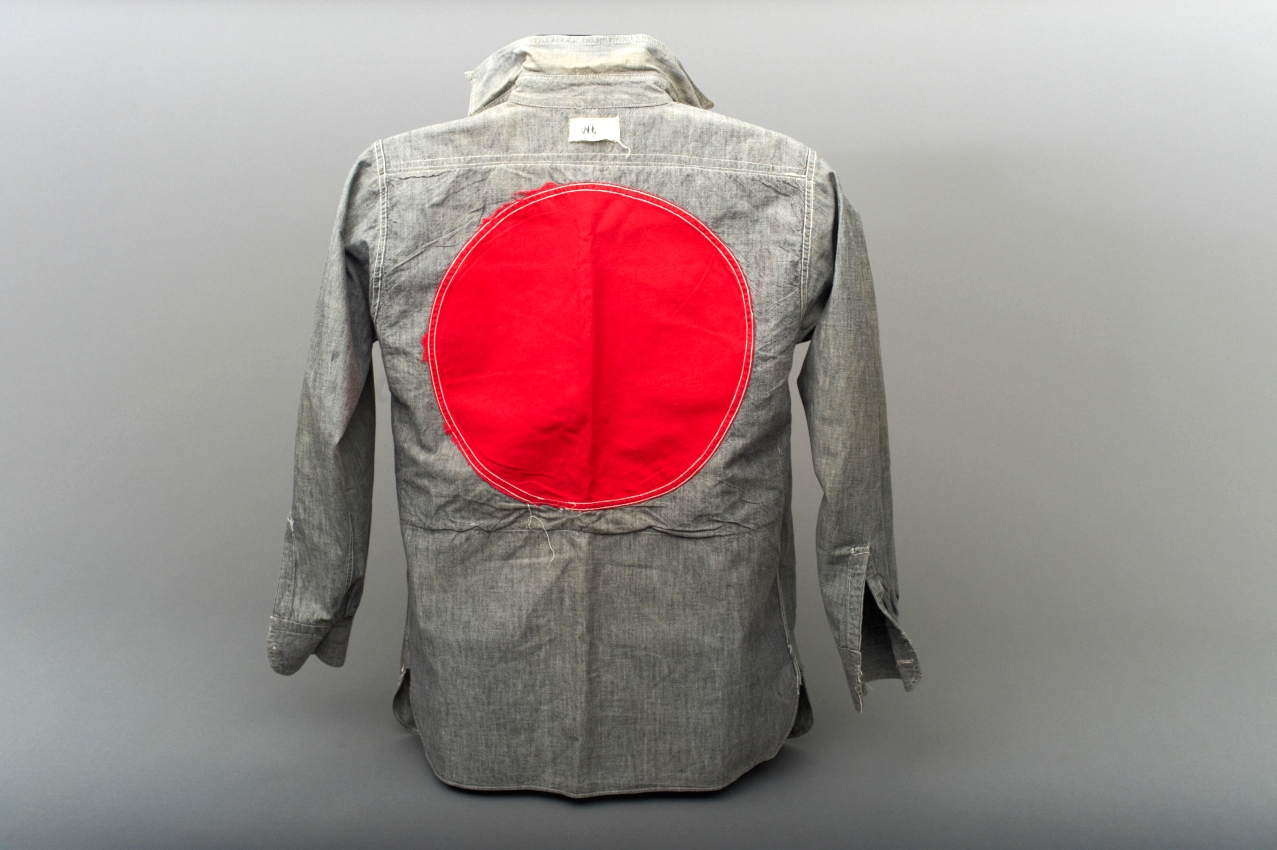 Alfred Baderâ€™s internment shirt from Camp I in Ile-aux-Noix, Quebec, circa 1940-1941. Bader arrived in Canada aboard the S.S. Sobieski and was interned for 15 months. (Courtesy Alfred Bader / Photo by Jessica Bushey)
Advertisement

A scene from internment by Wolfgang Gerson, watercolor on toilet paper, from Camp N in Sherbrooke, Quebec, circa 1940-1942. Gerson gave lectures to fellow internees while interned in camps in Quebec and Ontario. He painted on whatever he could due to the scarcity of paper. (Courtesy the Gerson family / Photo by Jessica Bushey)

VANCOUVER, Canada (JTA) — When Austrian and German Jews escaped Nazism by fleeing to Britain during the 1930s, the last thing they expected was to find themselves prisoners in Canada, interred in camps with some of the same Nazis they had tried to escape back home.

But that’s what happened to some 7,000 European Jews and “Category A” prisoners — the most dangerous prisoners of war — who arrived on Canadian shores in 1940. Fearing a German invasion, Britain had asked its colonies to take some German prisoners and enemy spies. But the boats included many refugees, including religious Jews and university students.

Though Britain alerted Canada to the mistake, it would take three years for all the refugees to be freed.

“It was a period where everybody was closing their doors,” said Paula Draper, a historian who worked on an exhibit about the refugees currently on display at the Vancouver Holocaust Education Centre. “But Canada closed its doors more tightly than almost anybody else.”

While greatly overshadowed at the time by the enormity of the Holocaust, the refugee episode illustrates two characteristics of Canadian government policy that are difficult to imagine today: rampant anti-Semitism and restrictive immigration. The country is one of Israel’s staunchest allies and has a relatively liberal immigration policy. In 2001, more than 18 percent of Canada’s population was immigrant; in 2010, Canada admitted more legal immigrants than it had in 50 years.

This wasn’t the case during World War II, when Frederick Charles Blair directed Canada’s immigration branch. Blair believed an international Jewish conspiracy was trying to skirt Canadian immigration policies by sneaking the refugees into the country. Moreover, anti-Semitic attitudes among Canada’s Protestant elite had hardened in the run-up to World War II, according to University of British Columbia historian Richard Menkis.

The Protestants believed ethnic minorities lacked Canadian values, a view similar to that of Quebecois nationalists, who believed the province should remain both French and Catholic. Jews faced quotas in universities, were blocked from various professional fields and barred from certain neighborhoods.

“There were certain observers who thought that places like Toronto and the establishment there was as anti-Semitic as anything in North America,” Menkis said.

After tiring of Canadian intransigence on the refugee issue, the British sent a high-ranking diplomat, Alexander Paterson, to assure the Canadians that the Jewish refugees posed no security threat. Paterson ended up spending more than eight months in the country and cleared many of the prisoners individually.

By 1943, the last of the refugees had been released. Many went on to make important contributions to Canadian society, including two Nobel Prize winners. But as late as 1948, even after the horrors of the Holocaust had been revealed, a public opinion poll had Jews ranking near the top of a list of groups that Canadians least wanted in their country.

“This is how blind Canada was, blinded by racism, to the potential of all the people they might have been able to rescue from the Holocaust,” Draper said.

Draper, who has taught in the Canadian Studies program at the University of Toronto’s University College, began researching the internment of Jewish refugees in the 1970s. At the time, the Jewish community was reluctant to complain about this history given the fate of the Jews of Europe. Even among the survivors themselves, who lamented their lost years of freedom, many were thankful just to have escaped the destiny of their European brethren.

“To be overly critical of a government’s policy at the time, about this specific group, in light of the Holocaust,” was hard to justify, Draper said.

But if criticizing the Canadian government in the aftermath of the Holocaust was somewhat taboo, today the internment camps have been largely forgotten. Moreover, given how far Canada has come, it can be easy to overlook the anti-Semitism that led to them.

Beginning in the 1960s, much began to change in Canada. Hoping to placate French Canadians who felt shut out of society at large, the government launched a dialogue on biculturalism.

“A number of groups — with the Ukrainians in the lead — said, ‘Well, biculturalism isn’t enough,’ ” Menkis said. “That opened a whole discussion at the federal level about multiculturalism.”

The Jewish refugees were held in eight camps across Canada, at least two of which also housed Nazi prisoners. Because they were not prisoners of war, the Jewish refugees fell outside of the protections of the Geneva Conventions. As a result, they were sometimes treated worse than the Germans. In some camps, the Nazis had access to Christian clergy and enjoyed Christmas trees and decorations, while the Jews struggled to find menorahs or candles, and rabbis were hard to come by.

Jewish prisoners organized classes, taught each other English and Torah, published newspapers and made art, pieces of which are on display at the Vancouver center’s exhibit. The exhibit also features video testimony from survivors and artifacts from the camps ranging from homemade board games to personal diaries to luggage brought from Britain.

Over time, the treatment of Jews in the camps improved; eventually they were reclassified from enemy prisoners to refugees. Upon their release, many returned to Britain to support the war effort.

“They were the first witnesses to the horrors of Nazism,” Draper said. “They’re the ones who knew more than anyone else what was happening to the people who didn’t get out.”