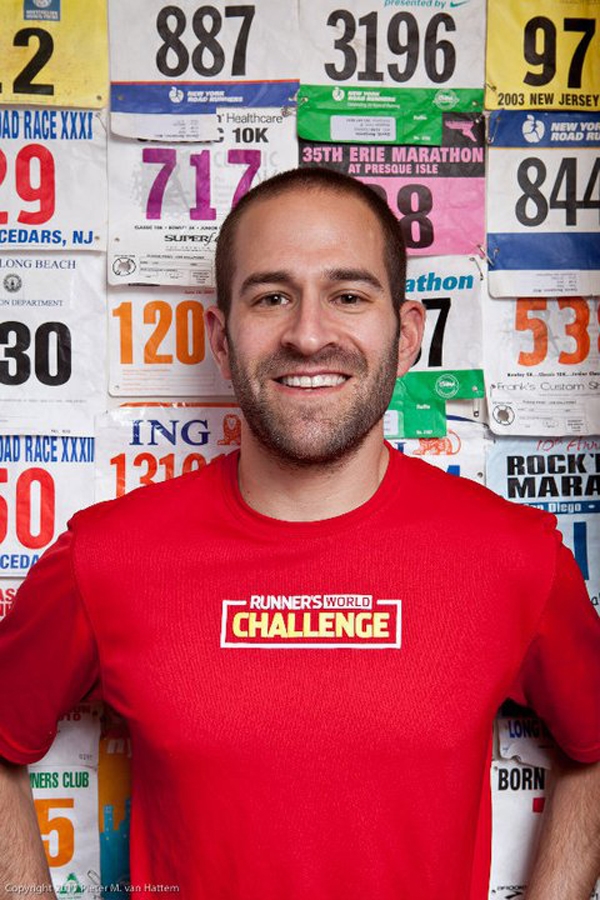 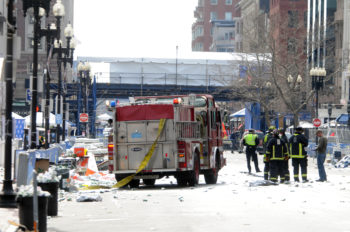 Firefighters taking over the scene of the bombing near the Boston Marathon finish line, April 15, 2013. (Darren McCollester/Getty) 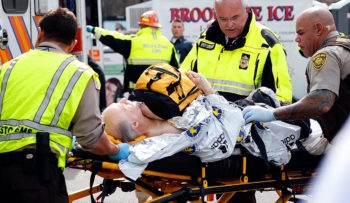 A man is loaded into an ambulance following the Boston Marathon bombings, April 15, 2013. (Jim Rogash/Getty Images)

This story is reprinted with the permission of the Philadelphia Jewish Exponent, where it originally appeared.

(Jewish Exponent) — “It was a beautiful day. I was so excited to run and having such a good run. The crowd was unbelievable. The whole experience was amazing. It was almost magical.”

That’s how the Boston Marathon began for Rabbi Benjamin David, head rabbi at Adath Emanu-El in Mount Laurel, N.J. It’s not how it ended.

David, 36, had completed the marathon and was back at his hotel when the twin explosions went off Monday afternoon near the finish line. The apparent terrorist attack killed at least three people, including an 8-year-old boy, and wounded more than 140, some critically.

David was running with Rabbi Scott Weiner, senior rabbi of Temple Israel of New Rochelle in suburban New York’s Westchester County. The two rabbinical school friends are co-founders of the national organization The Running Rabbis, which encourages clergy — Jewish and not — and their congregants to run. They always run for a charity and their race in the Boston Marathon raised money for the Dana Farber Cancer Institute.

David had an additional motivation for running. Although he had run 20 half-marathons and 13 marathons, David had never run the Boston Marathon and he wanted to beat his personal best time of 3 hours, 23 minutes. After 10 months of training, he did just that, running the 26.2 miles in 3 hours, 21 minutes. Weiner was one minute ahead of him.

From his hotel room two blocks from the blast site, David explained Monday night what happened next.

“Usually at these big races, it takes a while to exit the area because you pick up the medal and your tote bag and shuffle along because you are so tired,” David said. “Getting out of the finish area took us at least a half hour. We went to the hotel, and I was about to put my hand on the door to go into the lobby when I heard a massive explosion. It was an extraordinary sound. You knew instantly that something was wrong.”

David knew what kind of wrong that was. He was in Manhattan on Sept. 11, 2001, blocks away from the World Trade Center at the Hebrew Union College-Jewish Institute of Religion.

“In my mind, I instantly compared it to when I was in New York on 9/11,” he said. “I mean, it was a different sound. But when the first plane hit the tower, it was a sound like a sound you don’t normally hear. That’s what this was today. A sound that you don’t normally hear and your brain says, ‘Is something wrong?’ Then today when we heard the second bomb, like when there was the second plane on 9/11. Then we knew for sure that something was very wrong.

“People were running toward the scene and away from the scene,” David said. “Police were scrambling. The hardest part is that no one knew what happened, so you don’t know what to do. We thought maybe the grandstand had collapsed, or a building. I grabbed someone, and he said that two bombs went off.

“I went up to my room and put on the news,” he said. “Isn’t that strange? Here I am, two blocks from the thing, and my instinct is still to turn on the TV to see what happened. But then, from the window in my room, I could see basically everything. So the local news was on and there was confusion and speculation, and I’m looking out the window and looking right at what is being called a terrorist attack.”

Other than using the word “surreal,” David didn’t get into details about what he saw.

“You know one weird thing? They stopped the race in progress,” he said. “I heard on the news that there were supposedly 4,500 people still on the course. I wonder what happened to them. What were they told? What was it like for them, not knowing what was happening?”

Luckily, David’s family did know what was happening with him. Like most other marathoners, he had a chip on his clothes that enabled the tracking of his progress via a secure website.

“I knew that he was finished with the race, and I texted him to see how it went and he texted back, ‘Turn on the news,’ ” said his father, Rabbi Jerome David of Temple Emanuel in Cherry Hill, N.J. “I was shaken, even though I knew he was safe. It brought back memories of 9/11 because Ben and his brother John were both very close to the Trade Center that morning and we couldn’t reach either of them. This time, at least I heard from him. But even so, it’s the same feeling. It’s worrying about your child — and I know very well that he is a grown man — but he is my child. And he was again in the middle of danger. And there was nothing I could do about it right then.”

A friend called David’s mother, Peggy, on her cell phone.

“I was on a break from work and had just turned my phone on when a friend called and said, ‘There was a bombing near the finish line,’ ” Peggy David recounted. “I was sure he was done and I know that he usually goes back to the hotel pretty quickly. But I didn’t know exactly where he was when the bomb went off. Then his wife sent out a group text saying that he was OK.”

David’s wife, Lisa, the mother of their three young children, was tracking her husband’s progress and received an immediate text from him about his safety. That was a good thing because within hours she was aboard a plane headed for Israel on a business trip. She is associate director of camping for the Union for Reform Judaism’s Camp and Israel Programs.

Dr. Steve Gitler, president of Adath Emanu-El, found out about the bombing via a text from his daughter.

“She texted, ‘Is Rabbi alright?’ and I answered, ‘What do you mean?’ and she wrote back, ‘There were explosions in Boston.’ I went to CNN.com and read what happened. Then I got the text that Rabbi was OK, and I posted a message on our synagogue’s Facebook page, then sent an email to the board and sent an email to the congregation so that everyone knew he was OK.”

Rabbi Richard Levine, the rabbi emeritus of Adath Emanu-El who led the congregation for more than 46 years, heard the news on KYW-1060 radio.

“I knew that Ben was trying to run the marathon in less than 3 hours and 20 or so minutes, so I thought that he was done and probably safe, but that didn’t mean he was,” Levine said. “We texted back and forth so I knew that he was OK. But I was still very worried for a period of time. You don’t want someone you care about to be in harm’s way.”

In fact, Levine thinks the timing of the bombings was deliberately set to harm as many people as possible. A former distance runner himself, Levine knows how marathons are staged.

“Sometimes in these races, they stagger the start times and have the all-star runners go first, then there is a break, then another class of runners goes and another follows,” he said. “Anyone who did some homework would know that the vast majority of runners — the average runners who are not professionals — finish the Boston Marathon right at about the time that the bombs exploded. At that time, people are crossing the finish line en masse. And these are people who run purely because they love to run and want to be part of the Boston Marathon.

“So were the bombs intentionally set to explode then? Yes, I believe so.”

If there was any blessing in this, Levine said, it was that medical personnel were at the finish line waiting for runners and they immediately helped the injured.

David’s father, who was also a runner, sees other silver linings in the day’s events.

“In a moment, your whole life can change,” he said. “You start off in one direction and then it goes in another. It also reminds you of what is important and that is family, health and friendship. I am a rabbi and lead my congregation, but I am also a father and grandfather and tonight, I needed the support of my congregants. I went to a men’s study group and an executive board meeting and was surrounded by friends and supporters. Rabbis need that, too, you know.”

His son also got the support he needed.

“On my end, people were just remarkably kind and forthcoming,” the younger David said. “My phone has not stopped ringing for seven hours. It’s been calls, texts, Facebook. Everyone knew that I was doing this race. The congregation and my family and friends have been amazingly supportive today.”

But he still had to deal with the logistics of being two blocks from a terrorist attack. And he had just run 26.2 miles. He was hungry after the race, but when he tried to get something to eat in the hotel lobby, the police came in and “kicked us out of the hotel because they didn’t want large crowds gathering. They wouldn’t let me back in, even though I said that I was a guest.”

So he went to the house of his wife’s college roommate three or four blocks from the hotel and took refuge there for an hour, he said, before returning to the hotel.

“And then again I realized that I forgot to eat,” David said. He went in search of food, encountering a “horrible” scene outside, with barricades and police everywhere. He found an open restaurant,  a Cheesecake Factory, where there was an hour wait for seating. So he took something to go and returned to his hotel room.

David described his state just hours after the attack as” feeling dazed.”

“My body is, like, exhausted. Annihilated. The marathon is so emotional and you spend so much time preparing,” he said. “God willing it goes well and it’s an accomplishment. And I do feel that accomplishment. But then, there are people who died today and they died right outside my window.”

But he also had a different view he was trying to maintain.

“Today, we saw what looks like hate and violence. But what I also saw was a day of togetherness and community and caring and support — much like the Marathon itself,” he said. “Every marathon is about celebrating the human spirit and supporting one another. It’s about people from around the country and around the world, from different backgrounds and different religions running together. That is what I will remember from today, from before the bombing and right after it.

“Tragedy reduces things to the most primal and most important factors,” he said. “Family, friends, community and what strangers need help.”

In the attacks both on 9/11 and on Monday, he said, “we will see the best in humanity come out.”

“And one more thing: I will run the Boston Marathon next year,” David said. “Nothing will keep me from it.”