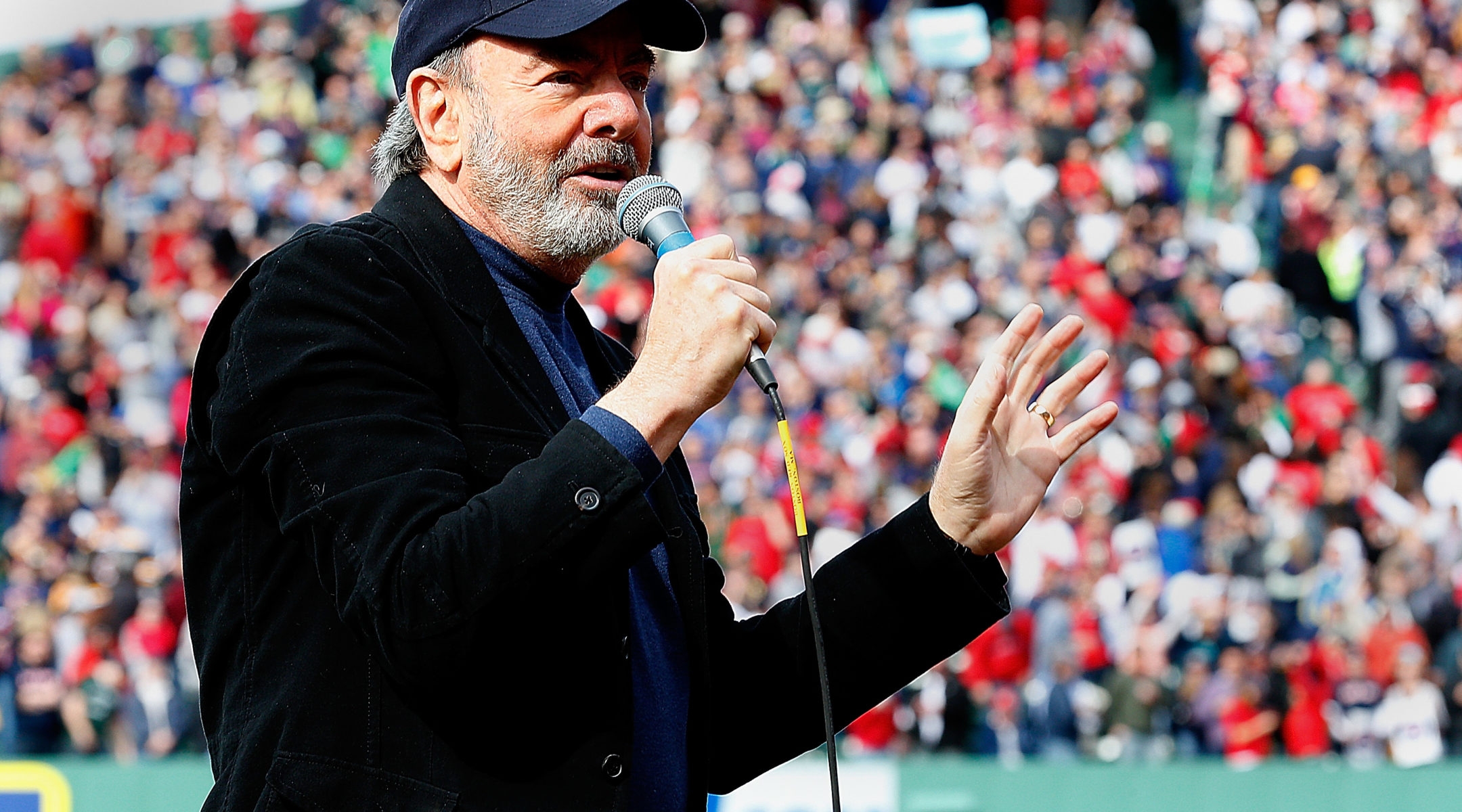 NEW YORK (6NoBacon) — After a horrible week in their city, one Bostonians surely want to forget, singer Neil Diamond brought them a memorable moment.

Diamond came to Fenway Park on Saturday, when the Red Sox played their first home game following the Boston Marathon bombing five days earlier. It was also less than a day after Dzhokhar Tsarnaev, a suspect in the bombing, was captured following a manhunt that included a shootout with police and a lockdown on Boston and other area towns. Tsarnaev’s brother, considered the leader in the bombing plot, was killed in the gunfire.

In the eighth inning, Diamond came on the field to perform his “Sweet Caroline,” which since the early 2000s has been sung at least once a game by the Fenway faithful to a Diamond recording.

According to MLB.com’s Jason Mastrodonato, Diamond decided to fly to Boston from Los Angeles on Friday night and arrived an hour before the afternoon game. Then he called the people at Fenway and said, “Hey, I’m here. Can I come sing?”

Of course, he put on a great show, and everyone sang along with the “pa pa pa!” part.

A night after the marathon bombing, the rival New York Yankees had played “Sweet Caroline,” without Diamond, when they squared off against the Sox at Yankee Stadium.

Anyway, according to The Sun, ever since meeting Barbra Streisand at the Oscars in February, the two singing superstars have developed a nice little friendship.

Adele stopped over for dinner before the awards ceremony, where the dishes prepared by Babs’ health-oriented chef left a big impression on the English Grammy and Oscar winner.

Apparently they’ve kept up the relationship, emailing and chatting by phone about recipes.

A match made in heaven, it seems. So could there be a cookbook in the works? Anything’s possible, but a more likely product of the pairing is a duet.

According to The Sun, Streisand already has tossed around the idea with friends — and she says she has song ideas, too.

We are looking forward to the collaboration and are thrilled that Adele’s experience with Jewish women over 65 isn’t limited to Joan Rivers.

The event, to be held April 29 to May 3, will celebrate Mel Brooks joining Twitter. On the first day of the festival, Brooks will join the social network and post a link to the livestream. Judd Apatow will moderate the event.

“The livestream is one way it will happen. In other cases it will be comedians or directors tweeting using the hashtag #Comedyfest, tweeting jokes out and to each other,” Walter Levitt, Comedy Central’s executive vice president of marketing, told ABC News. “In other ways it will be people tweeting Vines, those six-second videos.”

We usually associate Jack Black with the funny, everyman rocker type, but apparently he has a shy, soft side.

In an interview with The Sun for a “What I wish I’d known at 18,” Black revealed that it took him 15 years before he asked out Tanya Haden, now his wife.

”She was everything I could wish for. Talented, beautiful and a wonderful performer on stage. She was part of a band called The Haden Triplets. We first worked together on a student film, but we did not date.”

Nevertheless, Black also affirmed that despite being a hopeless romantic, he was still a pretty rebellious pothead.

”I did get mixed up with some shady characters early on and can remember driving in cars out of our heads,” he said.

”I also met Kyle Grass, my partner from Tenacious D, at around 18. I would go to his apartment and he would give me guitar lessons in exchange for a cheeseburger. We smoked a lot of pot, played a lot of guitar and fantasized about becoming rock stars. We eventually made our fantasies come true.”

During a Tribeca Film Festival panel, Ben Stiller talked about an interesting moment he had with the late film critic Roger Ebert.

“There have been articles lately asking why the United States is so hated in some parts of the world. As this week’s Exhibit A from Hollywood, I offer ‘Zoolander,’ a comedy about a plot to assassinate the prime minister of Malaysia because of his opposition to child labor,” Ebert wrote. “You might want to read that sentence twice. The logic: Child labor is necessary to the economic health of the fashion industry, and so its opponents must be eliminated.”

A few years later, the two would meet.

“To his credit,” Stiller recalls, “I ran into him like five or six years later backstage at ‘The Tonight Show,’ and he said, ‘Hey, I just want to apologize to you. I wrote that about ‘Zoolander,’ and I [now] think it’s really funny. Everything was a little crazy [back then]. It was Sept. 11 and I went overboard.’ I said, ‘Thanks for telling me backstage at ‘The Tonight Show.’ ”

Stiller is working on a sequel for the popular male modeling film.

Gwyneth Paltrow took some time off from being one of Hollywood’s most hated celebrities to talk to the Guardian about cooking, again.

Paltrow discussed her love of food and cooking, something she grew into. Her father is responsible for opening her culinary horizons.

“He relished every bite and wanted me to weigh in with opinions,” she recalled. “I remember his delight when, aged 6, I ate my first oysters and I wish he was alive to feed my kids their first oysters.”

Her vegetarianism is credited partially to none other than Leonardo DiCaprio.

“I hung out with Leonardo DiCaprio when I moved to New York,” she said. ”He was vegetarian and he’d talk about how dirty meat is and how bad factory farming is. I haven’t eaten red meat in 20 years, and although Leo’s not totally responsible, he definitely planted a seed.”

Paltrow at the end took some shots at her critics.

“All I do is try to eat and cook real food, the way our ancestors would. It’s funny how people react, as if it’s revolutionary that I don’t want my children to eat Oreos, or the English equivalent, every day,” she said. “I believe in real food, things being delicious, and butter, in minimally processed delicious foods and raw milk cheese and properly raised chicken and line-caught fish. But I’m a realist and I have kids and I love Oreos, too, so honestly I’m not rigid at all.”

“Cougar Town” actress Busy Philips revealed that she and (Jewish) husband Marc Silverstein are having a girl.

The couple already have a daughter, Birdie, who is 4.

“She was so beautiful, and so clumsy,” said Weinstein, who has a daughter, India Pearl, with Chapman. He also has Emma, Lily and Ruth from his first marriage.

Eddie Kaye Thomas, better known as Finch, the sophisticated high schooler who shared an unforgettable night with Stifler’s mom in “American Pie,” had quite the one-night stand in reality.

Apparently a SWAT team was called to his Hollywood Hills home last week after a woman allegedly threatened to stab him with a kitchen knife while barricading herself inside. According to TMZ, the two met the night before at Mel’s Diner in L.A., and the woman spent the night. The next day, the two became embroiled in an argument and the woman pulled the knife.

Thomas should probably learn from his “American Pie” character and look for more mature women.

We don’t like to bring too much attention to the public meltdown that is Amanda Bynes, mostly because we remember a time when she was respectable and adorable.

Nevertheless, certain ridiculous Internet choices do deserve our attention. A few weeks ago she tweeted a rather sexual fantasy about Drake.

The other one is a video titled ”I’m Sucking On A Sour Patch Kid Listening To Music Getting Ready For Tonight” featuring DJ Encore’s “I See Right Through You” and the incredibly derpy faces of Bynes. Like most wrecks, it’s hard to look away.

Meanwhile, Bynes was kicked out of a New York gym on Saturday for smoking weed.

Gossip blogger Perez Hilton, a one-time friend of Bynes, is urging her parents to take “drastic measures” help her.

When Lena Dunham receives an award this time, the president of the United States will be in the house.

Dunham, who has won a Golden Globe and many other awards this year, will join Dr. Ruth Westheimer and Los Angeles Mayor Antonio Villaraigosa on Thursday at the Champions of Women’s Health gala organized by Planned Parenthood. President Obama is scheduled to deliver the keynote address.

“President Obama has done more than any president in history for women’s health and rights,” Planned Parenthood President Cecile Richards said in a statement. “He understands that access to birth control and preventive health care are economic issues for women and their families.”

According to Politico, Dr. Ruth will receive an award for her “lifelong commitment to empowering people to talk openly about sex,” and Dunham will be recognized for her “portrayal of complex women’s issues.”