Why the ZOA hearts Rand Paul

A Zionist Organization of America affiliate, ZOA Campus, and the National Jewish Democratic Council got into a little Twitter war last week over the presence of Sen. Rand Paul (R-Ky.) at ZOA’s Capitol Hill day.

The NJDC noted, in a sequence of tweets, that Paul opposed aid to Israel and was the sole vote against a Senate resolution rejecting containment as a strategy. So why was he prominently featured at a ZOA event? Sharpening the oddness, the Washington Jewish Week reported that Paul got a standing ovation. 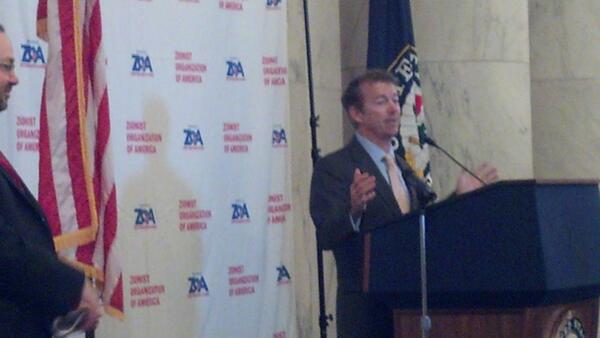 ZOA Campus didn’t answer, exactly. Instead, it hit back Twitter-style with a couple of sarcastic gibes. But in one serious answer, it noted that it “commends and criticizes” anyone who holds political office “when it’s due.”

Maybe. But aid to Israel? That’s kind of the sine qua non of being pro-Israel.

So I called Mort Klein, ZOA’s president, today to probe a little further: What’s with the Paul love?

The standing ovation had the most straightforward explanation: It came when Paul praised the ZOA. Anyone who has attended these events understands that a guest’s praise for a host triggers an automatic SO.

“I was asked before coming here today, ‘Why are you going to ZOA?’ I answered, ‘Why? Because ZOA was the only organization that supported my amendment saying no more money and arms to the Muslim Brotherhood in Egypt … Giving F-16 planes and M-1 tanks to them? One day we’re going to regret this.”

Fair enough. So was Klein’s explanation for why the ZOA backs Paul on postures that both AIPAC and Israel’s government reject — for instance, cutting off aid to Egypt. ZOA is its own group and need not hew to a consensus handed down from AIPAC headquarters or Jerusalem.

More puzzling is the aid question. The consensus on the $3 bilion Israel receives annually in defense assistance is pretty much impregnable across the pro-Israel spectrum. It is the issue that prompted the Republican Jewish Coalition to call out Paul, which is never easy for a partisan group.

Klein offered a number of explanations; the parenthetical caveats are mine:

More substantively, Paul is considering a 2016 run for the presidency. If he prevails, it could pose a real threat to defense assistance. Cover from the ZOA could potentially neutralize, to a degree anyway, the criticism his position on defense assistance will surely encounter from the pro-Israel community.

UPDATE: Mort Klein called me to say ZOA emphatically supports defense assistance to Israel (which is understood, but I could have emphasized it more.) Like other groups, he said, it builds coalitions with actors in areas where there is agreement and points out differences where they don’t agree.