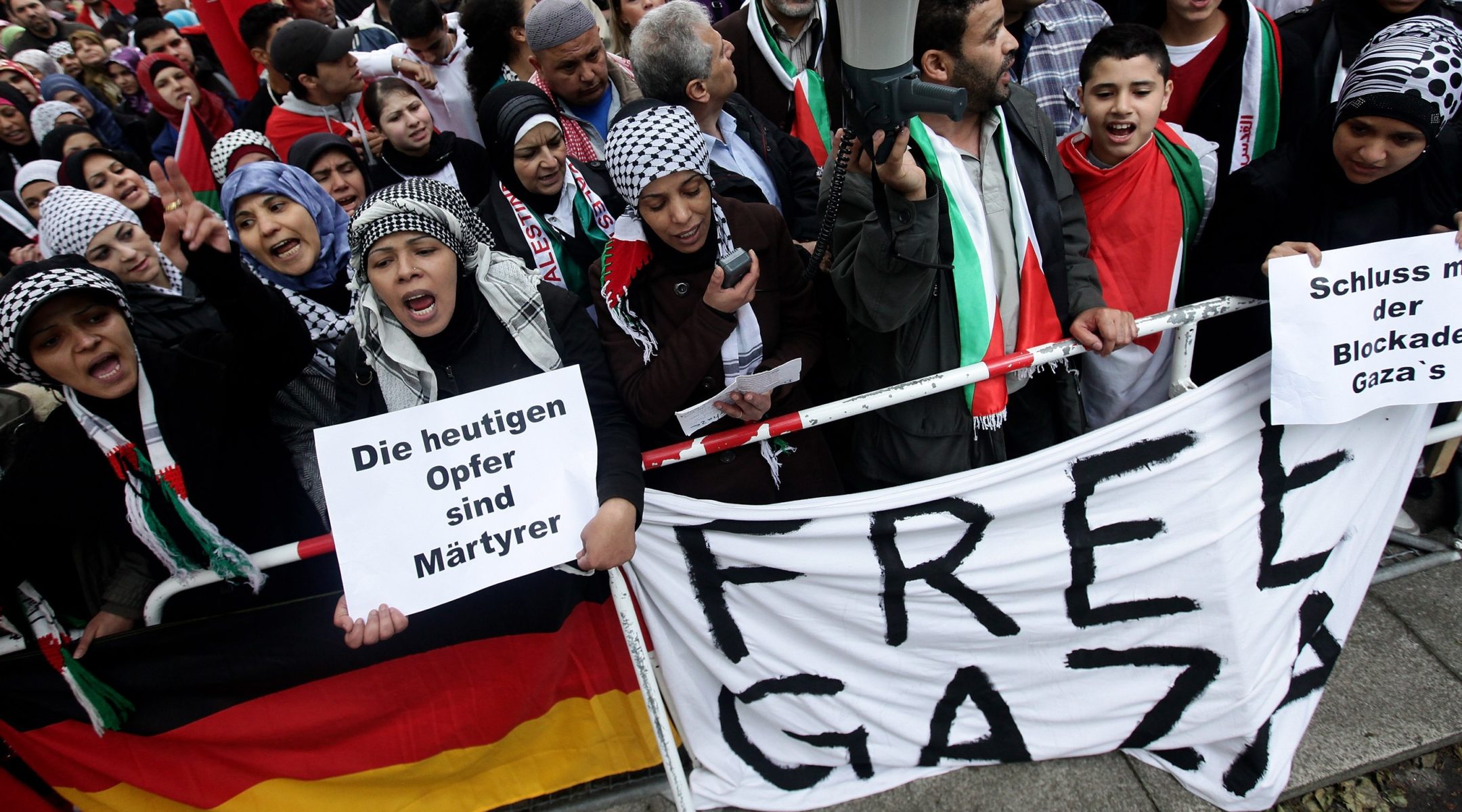 Demonstrators in Berlin protesting the deaths of pro-Palestinian activists in a clash with Israeli commandos aboard the Turkish ship Mavi Marmara, June 2010. (Sean Gallup/Getty)
Advertisement 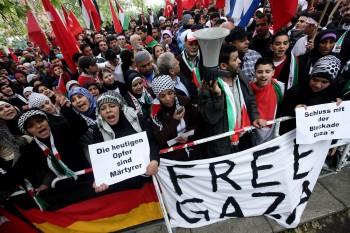 Demonstrators in Berlin protesting the deaths of pro-Palestinian activists in a clash with Israeli commandos aboard the Turkish ship Mavi Marmara, June 2010. (Sean Gallup/Getty)

WASHINGTON (JTA) — Israel’s settlement building is increasingly isolating the country in Europe, leading to European Union policies that could reinforce Israel’s delegitimization, according to the top EU representative to the peace process.

Andreas Reinicke, the EU’s special envoy for the Middle East peace process, said increasing frustration with the settlement movement is leading Europe to adopt policies that single out Israel for punitive measures.

In an interview Wednesday at the EU’s Washington mission, Reinicke, in town for meetings with counterparts in the Obama administration, cited two policies in particular: increased levies on goods manufactured in West Bank settlements, which already are in place, and labeling to distinguish products manufactured in Israel from those in the West Bank, which is under consideration.

“What the Europeans feel compelled to do is to make clear that our political position, our understanding of the territory of the State of Israel, which is the borders of 1967 including West Jerusalem, has to be reflected in our legal relationship between Israel and the European Union,” he said.

Reinicke said the European establishment overwhelmingly opposes actions that isolate Israel as a whole, noting for instance the decision by British physicist Stephen Hawking to boycott a conference in Israel this summer.

“The vast majority,” he began, then corrected himself. “Everybody is against this,” he said, referring to the boycott and divestment movement.

Nonetheless, he acknowledged that the policies distinguishing settlement products from Israeli products reinforce the movement to isolate and delegitimize Israel.

“The danger is there,” he said. “I don’t think it’s a good development.”

Reinicke suggested that the labeling policy would soon be adopted.

“The number of foreign ministers who are supporting this are increasing,” he said. “This is a development we should look at, which is not a good development.

“It is almost impossible to explain to any European why settlement is continuing all the time. It is difficult to explain to Europeans why increased settlement activities mean an increase of security for the State of Israel.”

The pessimistic scenario outlined by Reinicke echoed similar warnings this week from John Kerry, the U.S. secretary of state, and from the foreign minister of the Czech Republic, one of Israel’s staunchest friends on the continent.

“Yes, the United States of America will always have Israel’s back.,” Kerry said in remarks Monday to the American Jewish Committee. “We will always stand up for Israel’s security. But wouldn’t we both be stronger if we had some more company? “

“Alarm among Israel’s foreign partners about the continued expansion of Jewish residential areas beyond the Green Line, steadily eroding the size and contiguity of the residual non-Jewish territories, often seems to be felt in Israel as a political nuisance to be overcome rather than a serious questioning of Israel’s political credibility,” he said.

The Czech Republic was the only European nation to join the United States and Israel last year in opposing the Palestinian Authority’s successful bid to enhance its United Nations status to non-member state observer.

Most of the other 27 members of the European Union abstained on the vote. Asked why Europe does not treat the Palestinian Authority’s quest for statehood recognition absent negotiations with Israel with the same seriousness that it opposes settlement expansion, Reinicke said it was hard for European nations to adamantly oppose a diplomatic maneuver.

“We think that the Palestinians should come to the negotiating table without preconditions,” he said. “We had a strong discussion and very, very intensive discussions among the Europeans about how to move. But the bottom line, it is a sort of diplomatic activity. It is peaceful, not a violent one.”

He expressed coolness about a plan advanced by Kerry to seek $4 billion in private investment for the Palestinian areas, noting that economic conditions — in particular the ability to move people and goods about freely — are more important than money.

Kerry’s investment plan, which a number of Republicans in Congress have rejected, won a hearty endorsement this week from the American Israel Public Affairs Committee.

Reinicke suggested that Europe would soon join the United States in designating Hezbollah — or at least its military wing — as a terrorist entity, which would curtail the Lebanon-based terrorist group’s fundraising on the continent.

“If you see the public statements of the major foreign ministers,” he said, “I think there is a move in this direction.”