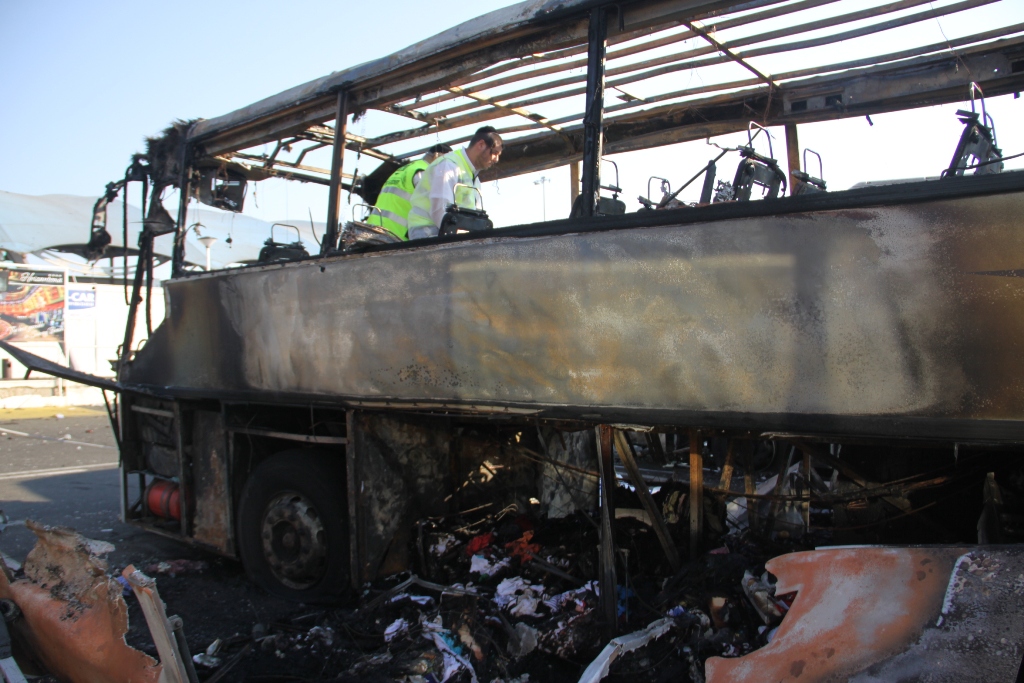 Israeli ZAKA emergency rescue team examining the remains of the bus at the scene of the Hezbollah terrorist attack in Burgas, Bulgaria, July 19, 2012. (Dano Monkotovic/FLASH90/JTA)
Advertisement

BRUSSELS (JTA) — On a continent led by Western capitals with diminishing sympathy for Israel’s problems, Jerusalem has come to rely on Eastern European allies in its drive to have Hezbollah placed on the European Union’s list of terrorist organizations.

In February, Israel seemed to score a breakthrough on this front when the Bulgarian government implicated the Lebanese group in a deadly bus bombing last year that killed five Israelis and one Bulgarian national in Burgas, a resort city on the Black Sea some 240 miles east of the capital, Sofia.

With the expected support of close allies such as Poland and the Czech Republic — the only EU member state that voted against Palestinian statehood at the United Nations in 2011 — Israel allowed itself a dose of optimism that the Europeans were coming around.

“The way to success seemed to go through the east because Western Europe was much too hesitant,” a senior Israeli diplomat told JTA.

So the results of a June 4 meeting in Brussels of the EU’s CP931 working group on terrorist designations to consider branding Hezbollah a terrorist group came as something of a shock: Traditionally reticent powers such as Germany and France supported blacklisting Hezbollah, while Bulgaria, Poland and the Czech Republic expressed reservations about the move.

“London, Berlin and Paris decided to nail Hezbollah for the Burgas attack because of Hezbollah’s role in the Syrian civil war,” a Western European diplomat told JTA.

But Bulgaria, which provided the strongest case for blacklisting Hezbollah, has gone wobbly. In February, its interior minister at the time, Tsvetan Tsvetanov, said he had “well-grounded reasons to suggest” that two Hezbollah operatives were behind the attack. Since then, however, the country has appeared to backtrack.

Former Bulgarian Interior Minister Tsvetan Tsvetanov claimed in February 2013 that he had “well-grounded reasons to suggest” that two Hezbollah operatives were behind the Burgas attack. (Creative Commons)

A source following the EU discussions told JTA that Bulgarian representatives called the evidence against Hezbollah “weak” in the June 4 meeting. And the country’s top intelligence official in an interview four days later asked why Israel has not provided “conclusive evidence” about Hezbollah’s involvement if it exists — implying that Bulgaria’s evidence was not conclusive.

The softening appears to be mainly the result of political jousting in Bulgaria, where the government that accused Hezbollah in February has since fallen and the issue has become a hot-button issue among lawmakers.

The leader of the Socialist Party accused the government of putting Bulgarians at risk by naming Hezbollah. Rival parties have traded accusations of incompetence in handling the Burgas probe. A lawmaker and former prime minister, Ivan Kostov, has publicly expressed doubts about Hezbollah’s involvement altogether. And officials of the opposition GERB party have called the new government’s skeptical statements about the case “irresponsible.”

“The zigzag had nothing to do with Hezbollah,” said a Bulgarian diplomat in Brussels. “It’s internal score-settling.”

Still, Bulgaria’s shifting gave the Poles and the Czechs “cold feet” at the June 4 meeting, according to an analyst at an EU agency who has followed the discussions closely.

“Mind you, the Bulgarians never published the report,” the analyst said. “Now they are saying all kinds of things. Even if you’re more pro-Israel than Benjamin Netanyahu, you cannot base such a serious decision on rumors.”

The Czech Republic, Poland, Ireland, Malta, Bulgaria and the Netherlands all declined JTA’s requests for comment on the June 4 meeting, but the spokesperson for the European Union in Israel said discussions are “ongoing” and any decision would require a consensus by all 27 EU member states.

A follow-up meeting is scheduled for June 19 in Brussels, JTA has learned.

Though the minutes of the June 4 session are confidential, what is known is that Britain cited the Burgas attack in its request last month to convene the CP931 meeting. Britain blacklisted Hezbollah’s military wing back in 2008, becoming the only EU nation to do so except the Netherlands, which views Hezbollah in its entirety as a terrorist entity. 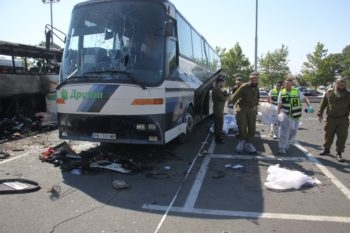 But ahead of the June 4 meeting, Germany for the first time came out in support of blacklisting Hezbollah’s military wing, a stance Foreign Minister Guido Westerwelle connected to the Burgas bombing. France also supported the move for the first time last month, but its foreign minister, Laurent Fabius, pointed to Syria — not Bulgaria — as the reason.

It was a revealing detail, according to the Western European diplomat, who believes the Western nations are driven primarily by concern over Hezbollah’s role in Syria, where its forces are fighting alongside the troops of President Bashar Assad in a two-year civil war that has claimed more than 90,000 lives.

“France, Germany and Britain just used Burgas to punish Hezbollah,” the diplomat said. “An attack on EU soil is a winning argument, far stronger than a fight in Syria. But they didn’t think the Bulgarian government would collapse and backtrack.”

At the CP931 meeting on June 19, few expect delegates to agree to blacklist Hezbollah. Poland has said already that it may use the meeting to raise legal and political concerns about the move.

“These twists and turns are interesting from an academic point of view,” the Israeli diplomat said. “But practically it means the effort to blacklist Hezbollah is back to square one.”