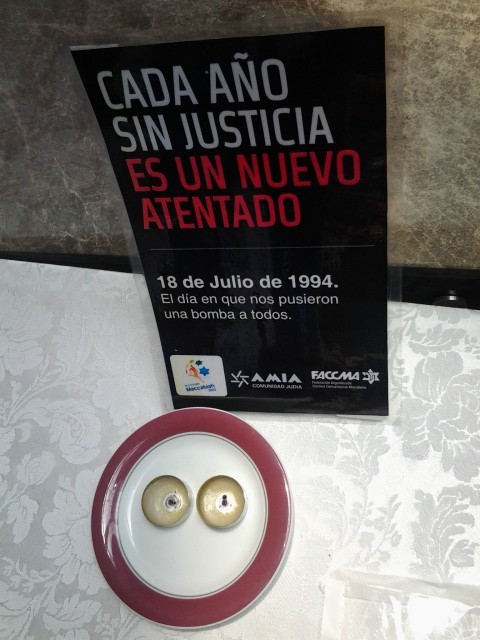 Argentine tennis players last Thursday marked the AMIA bombing anniversary in a ceremony held prior to the opening of the Maccabiah, whose logo is visible in the bottom-left. (Courtesy Hillel Kuttler)
Advertisement

American, Canadian, Australian, Russian and British athletes started filing out of a Jerusalem hotel lobby last Thursday to buses that would transport them to the opening ceremony of the 19th Maccabiah Games.

They paid little mind to the semicircle of older people forming around a table. A man lit two memorial candles and uttered a few words in Spanish. Within five minutes, the short ceremony had concluded.

Those in the semicircle — Argentinian tennis players in the master’s division — were commemorating the anniversary of the July 18, 1994, terrorist bombing in Buenos Aires of the AMIA Jewish community center. The attack killed 85 people and destroyed the building. Israel has long fingered Iran as directing the attack.

Similar commemorations Thursday were held nearly everywhere Argentina’s Maccabiah athletes went. The AMIA victims were remembered during the Maccabiah’s opening ceremony, along with the 11 Israelis murdered at the 1972 Munich Olympics and the fallen soldiers of the Israel Defense Forces.

The ceremonies were “not only a remembrance,” but also “a [call] for justice,” said Elena Belinky, deputy assistant to the Argentinian delegation head. They acquired greater meaning, she said, because of the Argentina-Iran agreement in January to form a panel to investigate the bombing.

“We find this a ridiculous thing,” Belinky said, “to make an agreement with the aggressor, since [the Iranians] were responsible for the attack.”