After Macklemore and Ryan Lewis blew a shofar in a VMA promo video, we were hopeful last night’s event would be full of fantastic Jewish moments. Not so much, unfortunately, but here’s what we managed to scrape together.

The awards ceremony took place in the Barclays Center, which is in Brooklyn, which is, last time we checked, a borough a few Jews call home.

The award for Best Collaboration went to Jewish singer Pink and Nate Ruess of the band fun. for “Just Give Me A Reason.” Ruess may not be a member of the tribe, but fun.’s lead singer Jack Anotonoff is, and Ruess is reportedly dating his sister Rachel.

Drake’s “Started From the Bottom” was nominated for Best Hip-Hop Video and Best Direction. The Jewish rapper didn’t take home a Moonman, but he did perform “Hold On, We’re Going Home.”

Finally, Jewish actors Scarlett Johansson and Joseph Gordon-Levitt made out in the premiere of a racy new clip from “Don Jon.” Levitt wrote and directed the romantic comedy, which comes out September 27. 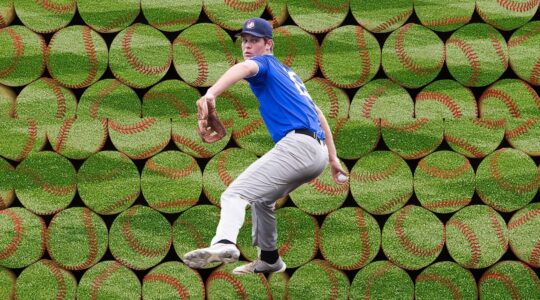 ‘Why can’t I be the first?’ Orthodox baseball prospect Jacob Steinmetz on the history he hopes to make